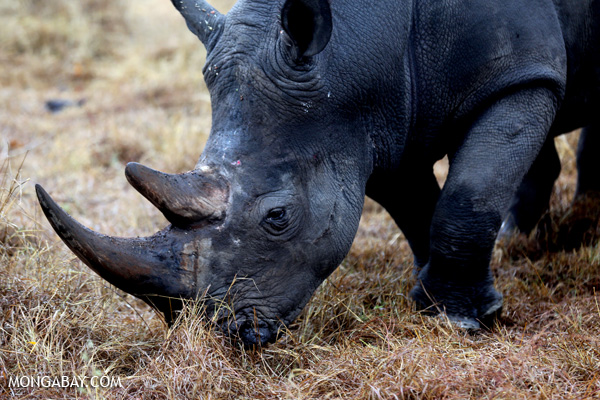 Rhino near Kruger National Park. Photo by Rhett A. Butler

The donation, announced last week, will equip rangers with a helicopter, elite canine units, advanced detection and tracking equipment, and high-tech surveillance tools to go after poachers, who have been decimating one the world’s last strongholds for rhinos. Kruger is home to more than two-fifths of the world’s surviving 22,000 rhinos, but nearly 1,400 have been poached in the park since January 2010. Overall South Africa lost 2,368 rhino during the period, according to South African National Parks.

“This is an overwhelming issue,” Buffett told The Associated Press in an interview. “We’re going to [fight rhino poaching] at a scale that hasn’t been done.”

Buffett serves as CEO of the Howard G. Buffett Foundation.

Rhinos are being poached for their horns which are viewed as a status symbol in parts of Asia. The trade is dominated by criminal syndicates.