Two scientists are calling on researchers, NGOs, and governments to begin studying the impact of burning forests and peatlands in Indonesia on the already-threatened marine ecosystems of Southeast Asia. Every year, Indonesian farmers set forests, vegetation, and peatlands alight to clear them for agriculture, often palm oil, and pulp and paper plantations. Not only do these practices destroy hugely-diverse tropical forests, but the resulting haze spreads to many parts of Southeast Asia, threatening regional health and impacting economies. Now, a new paper argues that the sinister impacts of Indonesia’s burning may extend as far as the oceans.

“Biomass burning in Indonesia has intensified in frequency and severity since the 1970s…In June 2013, regional air pollution indices reached record highs, with values deemed hazardous in Singapore, Indonesia and Malaysia, prompting some affected areas to declare states of emergency,” the researchers, Zeehan Jaafar with the National University of Singapore and Tse-Lynn Loh with the John G. Shedd Aquarium, write in a new opinion paper in Global Change Biology.

Last year’s crisis lead to global press coverage, finger-pointing, and high level meetings between numerous governments in the region. But the problem remains: just last month NASA satellite recorded hundreds of hotspots, i.e. fires, on the Indonesian island of Sumatra. While the health, economic, and land-based environmental issues of this burning has been well-documented, the impact on marine ecosystems has been almost wholly ignored. 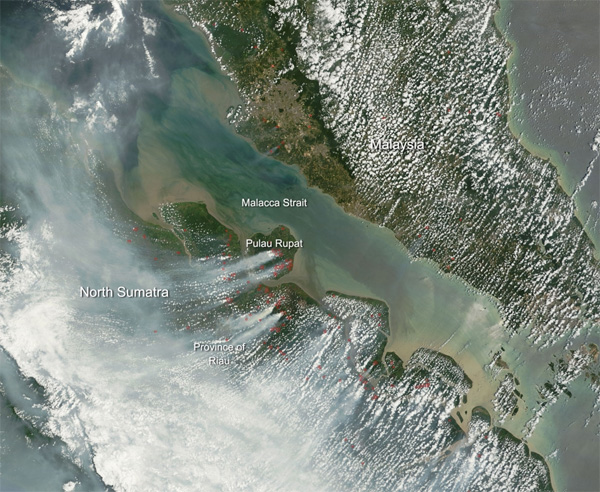 “We postulate that effects on marine systems are more critical than currently appreciated. There is an urgent need to fill these gaps in knowledge,” Jaafar and Loh write.

The region houses the global epicenter of marine biodiversity: the Coral Triangle. Covering warm waters around Indonesia, Malaysia, Papua New Guinea, and a few Pacific islands, the Coral Triangle is arguably the most biodiverse marine region on the planet. According to WWF, the region is home to over 600 species of reef-building corals and 2,000 reef fish.

But the two researchers warn that the haze from the land-based fires could decrease sunlight to these precious marine ecosystems, perhaps undercutting photosynthesis in coral reefs as well as mangroves and sea grass.

Meanwhile, runoff and topsoil loss due to fires may lead to eutrophication in marine environments. Eutrophication is caused when incoming nutrients, such as nitrogen, result in a sudden boom of phytoplankton, which eventually die and suck up all the oxygen out of the water. This eutrophication, or dead zone, causes a massive loss in species abundance and diversity. Furthermore, land runoff could also lead to sediment loading in marine ecosystems, which can cause coral bleaching.

The scientists also warn that crisis is depositing manifold particulates of various compounds—such as carbon, ammonia, hydrocarbons, and nitrogen—into the ocean with little knowledge of how this will impact various ecosystems. 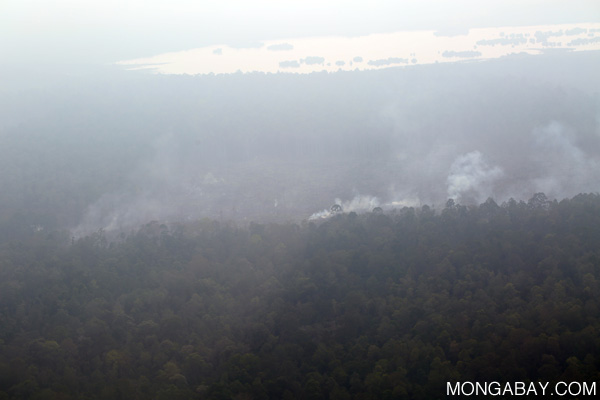 Fires in Riau Province, Sumatra in February 2014. Photo by: Rhett A. Butler.

“Land, air and sea are highly interconnected. Being aware of both direct and indirect impacts to marine habitats help us safeguard these natural resources,” Loh said in a press release.

Worse still, many of the marine ecosystems in Southeast Asia are already suffering from considerable human pressure.

“Over 85 percent of coral reefs in Singapore, Indonesia and Malaysia are threatened. Similarly, at least 80 percent of all mangrove forests in Southeast Asia have been lost in the past 60 years while terrestrial run-off, pollution, dredging and bottom trawling are some of the persistent threats facing seagrass ecosystems,” the authors write.

Moving forward, the scientists urge new research on the impact of burning-haze on the region’s marine ecosystems, especially focusing on the influx of particulates.

“To date, the impacts of only a small fraction of organic compounds have been investigated,” the researchers write. “We thus recommend studies into the sublethal effects of these particulates.”

The researchers also call on nations to share data and information while establishing robust baseline information and setting up a longterm monitoring system for the region. 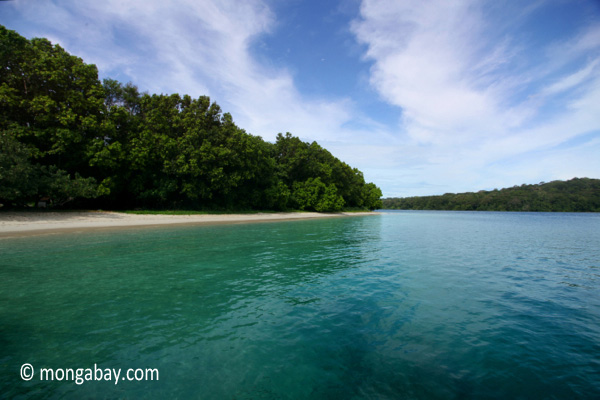 Where ocean meets land: Peucang Island in Indonesia. Photo by: Rhett A. Butler.

“Agencies such as Seagrass Watch and the Global Coral Reef Monitoring Network (GCRMN) have been monitoring habitats of interest on a global scale,” the write. “The cooperation of such agencies with scientific and government bodies in Southeast Asia can aid in the rapid sharing and dissemination of information.”

In the end, the experts say nations should be ready to respond by taking action during another haze crisis, such as closing down fisheries temporarily, shuttering marine parks, and instigating programs to enhance biodiversity and kickstart ecological recovery.

“It is time to recognize biomass burning and haze as one of the major stressors of marine ecosystems in addition to overfishing, coastal development, climate change, and ocean acidification,” Jaafar and Loh conclude.

(03/01/2014) A new satellite image released by NASA highlights Indonesia’s ongoing problem with haze caused by land-clearing fires set across carbon-dense peatlands on the island of Sumatra.

(07/23/2013) Deforested areas and degraded peatlands are again burning on the island of Sumatra, triggering haze alerts in nearby Malaysia, despite last week’s commitment by regional authorities to address the ongoing fire problem in Indonesia.

(07/17/2013) A high-level meeting to discuss approaches for curbing fires that drive haze over Southeast Asia ended today with a recommendation that governments establish a haze monitoring system that would share detailed land-use and concession maps to help coordinate action against companies that set illegal fires, reports the World Resources Institute (WRI).

(07/16/2013) Greenpeace and the Roundtable on Sustainable Palm Oil (RSPO), a body that sets criteria for greener palm oil production, are caught up in a row over the origin of fires that cast a pall over Sumatra, Singapore, and Malaysia last month. The dispute started when media outlets, based on independent analysis of satellite data, identified several members of the RSPO as possible culprits in the fires in Riau Province. Greenpeace said the findings indicated that the RSPO is failing to hold its members accountable for burning. The activist group also criticized the RSPO for not expressly prohibiting deforestation and conversion of peatlands.

(07/10/2013) A new mapping tool based on NASA satellite data confirms that the majority of fires that drove the recent haze over Sumatra and Malaysia were concentrated in deforested peatlands and scrub, rather than natural forest areas.

(07/09/2013) World Growth International, a group that lobbies on behalf of industrial forestry and palm oil companies, is clouding the origin of the fires that triggered ‘haze’ air pollution alerts across Singapore and Malaysia last month.

(06/28/2013) With a backdrop of fires raging across oil palm and timber plantations in Sumatra, business and political leaders convened in Indonesia to discuss a path forward for producing deforestation-free commodities by 2020.

(06/28/2013) As forest fires on the island of Sumatra continue to blanket parts of Indonesia, Malaysia and Singapore with a thick haze, a coalition of civil society groups has called on Indonesia’s Ministry of the Environment to investigate timber and palm oil companies they believe may be behind the fires.

(06/27/2013) The Indonesian government will spend 100 billion rupiah — $10 million — on a cloud-seeding scheme to reduce the haze plaguing Sumatra, Singapore, and Malaysia.