Is Brazil’s epic drought a taste of the future?

With more than 140 cities implementing water rationing, analysts warning of collapsing soy and coffee exports, and reservoirs and rivers running precipitously low, talk about the World Cup in some parts of Brazil has been sidelined by concerns about an epic drought affecting the country’s agricultural heartland.

With its rise as an agricultural superpower over the past 20 years, Brazil is today the world’s largest exporter of coffee, sugar, oranges, soy, and cattle. That means the drought will take a bite out of the country’s already flagging economic growth. But the worst may be yet to come if climate projections prove accurate: forecasts are for hotter and drier conditions going forward.

“The regions where we plant coffee today, especially the ones on lower elevations, will be getting hotter,” Hilton Silveira Pinto of EMBRAPA, Brazil’s government agency for agriculture, told NPR. “And many of the coffee plantations in these areas will probably have to be abandoned.” 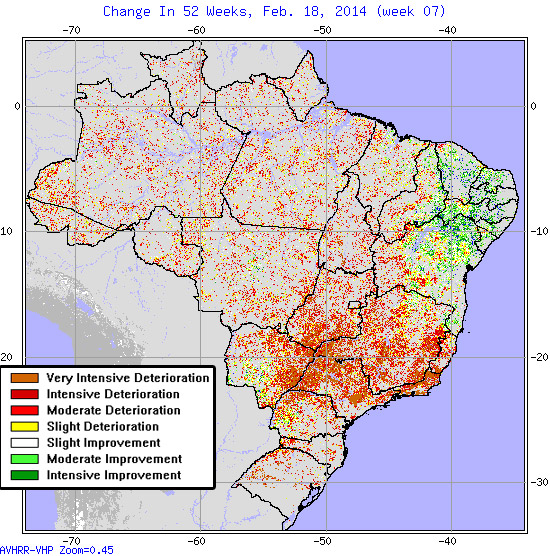 Research suggests the forecasts could become even more dire if the Amazon rainforest — which plays a critical role in local and regional rainforest — tips toward drier conditions. Several studies predict that the combination of forest loss and climate change could conspire to tip large areas in the southern Amazon from rainforest toward savanna habitat, reducing rainfall. Already the region has experienced two of the most severe droughts on record — in 2005 and 2010.

“If droughts continue to occur at 5–10-year frequency, or increase in frequency, large areas of Amazonian forest canopy likely will be exposed to the persistent effect of droughts and the slow recovery of forest canopy structure and function,” wrote researchers in a paper published in Proceedings of the National Academy of Sciences in December 2012. “In particular, areas of south and western Amazonia have been shown to be affected severely by increasing rainfall variability in the past decade, suggesting that this region may be witnessing the first signs of potential large-scale degradation of Amazonian rainforest from climate change.”

Further east, farmers and city residents are already feeling the pain. Some 6 million people in 11 states have been asked to ration water and temperatures in January in Sao Paulo were the hottest ever recorded. 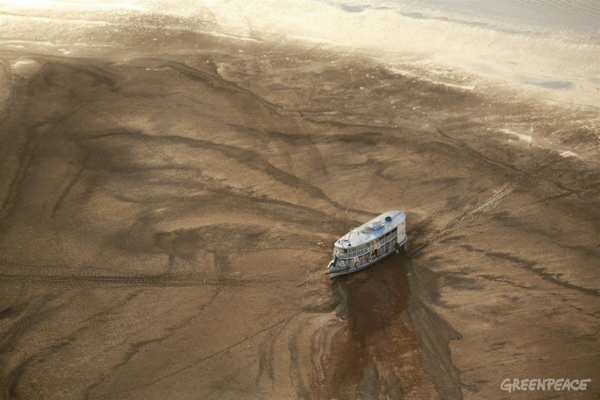 Big river boat trapped on a sand bank east of Barreirinha, during one of the worst droughts ever recorded in the Amazon. October, 2005. © Greenpeace / Daniel Beltra