The Dallas Safari Club has auctioned off a permit to shoot-and-kill a Critically Endangered black rhino in Namibia for $350,000. The club says the proceeds from the auction will aid rhino conservation, but the move has upset many wildlife organizations and attracted protestors outside the closed-door auction. In fact the issue has become so contentious that the FBI is currently investigating purported death threats against the Dallas Safari Club members over the issue. Currently, less than 5,000 black rhinos survive in the wild today, a drop of 90 percent since 1960 as the species has been decimated by poaching and habitat loss.

“How about auctioning a few Siberian tiger permits or Asian elephants or orangutans? Where will this covetous behavior stop?” writes Wayne Pacelle, the CEO of the U.S. branch of the Humane Society, in an opinion piece. “The strategy behind these auctions has surface appeal but is lacking in common-sense, moral reasoning.”

However, the Dallas Safari Club, which has not released the name of the top bidder, says the hunter will only be allowed to kill a non-breeding male rhino, which has reportedly become aggressive towards other rhinos. The hunt will be closely managed by Namibia, which auctions off about three rhinos a year to trophy hunters, but this is the first time the auction was allowed in the U.S. 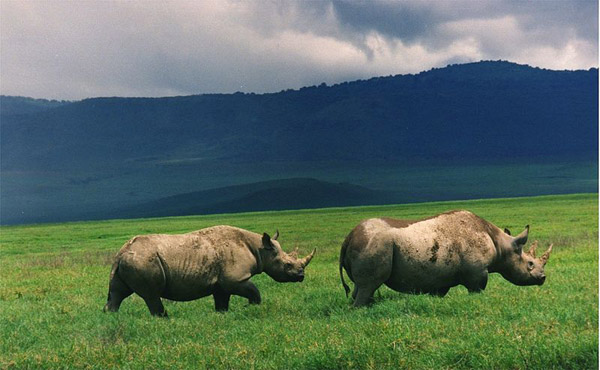 A pair of black rhinos in Tanzania. Photo by: Brocken Inaglory/Creative Commons 3.0.

“This is, in fact, making a spectacle of killing an endangered species,” Jeffrey Flocken, with the International Fund for Animal Welfare (IFAW), told the Associated Press.

Black rhinos are listed under the U.S. Endangered Species Act, which under normal conditions would make it impossible for a trophy hunter to bring any parts of the species back into the U.S. However, the act allows people to import animal parts under special circumstances. In this case the hunter may be allowed to bring back their “trophy” if they prove they supported conservation efforts through their payments. Such a permit was issued just last year for a black rhino. However, the Dallas Safari Club took bids via phone, which means the hunter may not be America.

Rhino populations worldwide, already small and fragmented, are suffering from a mass-poaching crisis. Last year, nearly 800 rhinos were shot dead by poachers in South Africa, which has become the epicenter of poaching since it supports the world’s largest remaining population of rhinos. Rhinos are killed for their horns, which are turned into powder and consumed as a curative in some East Asian countries, despite no medical evidence for its efficacy.