Months after closing sawmills on the fringes of an indigenous reserve for the hugely-imperiled Awá people, the Brazil government has now moved into the reserve itself to evict illegal settlers in the eastern Amazon. According to the NGO Survival International, Brazil has sent in the military and other government agents to deal with massive illegal settlements on Awá land for logging or cattle.

Activists have pleaded with Brazil for years to tackle the illegal settler issue in the reserve, which was created in 2003 to protect the dwindling population of Awá, also known as the Guajá. The latest move comes after a global campaign calling on the Brazilian government to deal with the issue. Today, only around 450 Awá people survive with about a hundred in voluntary isolation from the outside world.

Settlers have 40 days to leave the Awá reserve voluntarily along with their livestock and goods, reports Exame. According to Brazilian law, the illegal settlers are not entitled to compensation.

The Awá tribe, dubbed by Survival International as the “the world’s most threatened,” has faced growing perils since the 1960s when a railway was built near their territory to carry iron ore from the Carajas Mine. The Awá are hunter-gatherers and depend on the forest around them for survival, however, illegal ranchers and loggers have already cut down around 30 percent of the forest in the reserve. 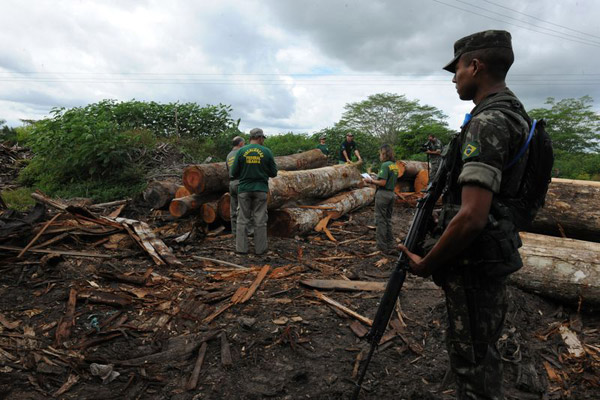 (10/16/2013) Forty percent of the 509 million hectares of land classified as ‘rural property’ in Brazil is owned by 1.4 percent of rural households, finds a new analysis conducted by a group of Brazilian NGO’s.