On December 17th, officials first discovered a massive oil spill in the Caribbean-island nation of Trinidad and Tobago. Since then, a series of oil spills have been discovered, coating beaches, sullying mangrove forests, and very likely decimating wildlife in Trinidad’s Gulf of Paria. The oil spills have been linked to the state-owned oil company, Petrotrin, which has claimed that sabotage is behind at least two of the spills. However Trinidad and Tobago’s Environmental Management Authority has recently slapped the company with a $3.1 million fine by for the damage, while some politicians have called for an independent investigation into the slew of spills.

“The spills have been at several locations, including the Petrotrin Point-a-Pierre refinery, where the main one took place. Seven thousand and five hundred barrels of were lost due to a faulty transmission line. Petrotrin, the State owned Trinidadian oil company, initially blamed the spill on sabotage and suspended 12 workers,” Marc de Verteuil, a founder of the local environmental organization Papa Bois Conservation and a local journalist, told mongabay.com. “It later emerged, in a confidential internal Petrotrin report, that no major maintenance had been carried out on the transmission line for 17 years.”

Media reports have said that there have been 11 oil spills in total, however, the Environmental Management Authority recently said there had been only four. Such discrepancies belies the mixed information coming from both the company and the government. Some politicians have called for an investigation, including opposition leader, Keith Rowley, with the People’s National Movement party. Rowley recently said the Petrotrin was attempting to mislead the public through the claims of sabotage.

“Up to now nobody has told us the point-source of that leak,” Rowley said.

Even as politicians and the public attempt to sort out how this happen, critics say the response to the spill was at first almost non-existent. De Verteuil says Petrotrin did little in the first few days to mitigate the spill’s impact, and it was only his photos of oil-slicked wildlife five days later that helped galvanize more attention—and action—to the environmental disaster.

“Petrotrin’s initial press release claimed that the spill was contained and that all was under control. A delayed response meant that booms weren’t placed in time to protect beaches and mangroves. Wildlife response was non-existent,” says de Verteuil. “On 22 December I made my first visit to one of the oil spill sites at La Brea. Immediately I found two dead, oil slicked pelicans and shortly after that I encountered a Petrotrin worker carrying a heavily oil slicked laughing gull. To my knowledge this was the first oil slicked animal to be saved.”

Traveling in the region, de Verteuil says that both mangrove forests—hugely important ecosystems for fisheries and biodiversity—as well as beaches were hit hard. 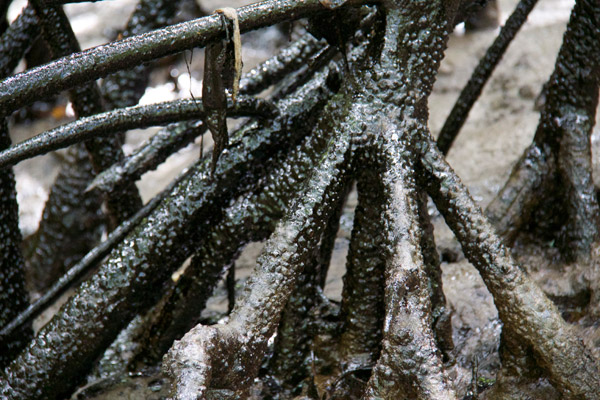 “The mangrove areas affected by oil are characterized by an absence of life. Where there should be an abundance of crabs and snails there are none, except for a few oil slicked survivors. Even the ever-present mosquitoes, which should descend by the hundreds, are gone,” says de Verteuil. The mangroves are home to Trinidad and Tobago’s state bird, the scarlet ibis.

“Beaches were severely affected,” he adds. “Clean up operations removed the oil affected top layer of sand, but hydrocarbons have soaked down to lower layers affecting all the tidal zone ecology.”

Criticism has also been leveled at Petrotrin for using the controversial oil dispersant, Corexit 9500, for clean-up operations. In fact, a study in 2012 in Environmental Pollution found that using Corexit made oil 52 times more toxic during the Gulf oil spill. Despite such research, the deputy head of Oil Spill Contingency Plan in Trinidad and Tobago, Mark Rudder, said recently that Corexit 9500 was less toxic than everyday hand soap based on information from Environment Canada. He also said people shouldn’t be concerned about eating fish from the Gulf of Paria where the spills have occurred.

The oil spills in Trinidad have also raised new concerns over the country’s plan to pursue offshore drilling, which has already encountered protests from fishermen concerned about the impact of seismic testing on their livelihoods.

“We’ll never know the true extent of the wildlife that died,” he notes. “I believe that the greatest mortality would have taken place in the early days of the oil spill. Most of the affected birds would have gotten stuck in the oil and drowned or been smothered. However I have seen many, many birds with oil on their feathers. I’ve seen birds which seem sick and lethargic, probably suffering from oil toxicity.” 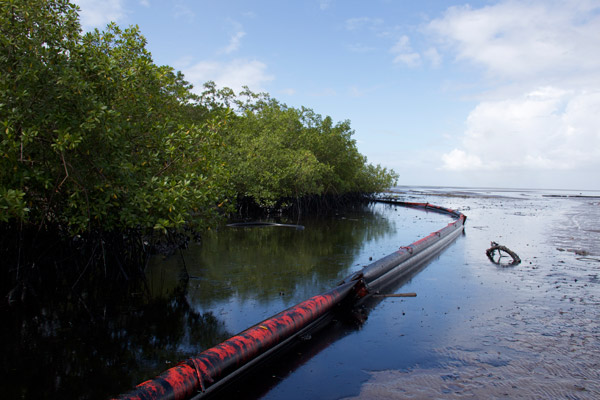 Clean up attempts in the mangroves. Photo by: Marc de Verteuil. 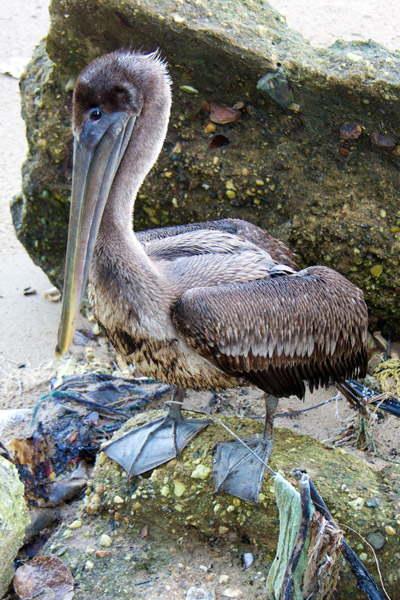 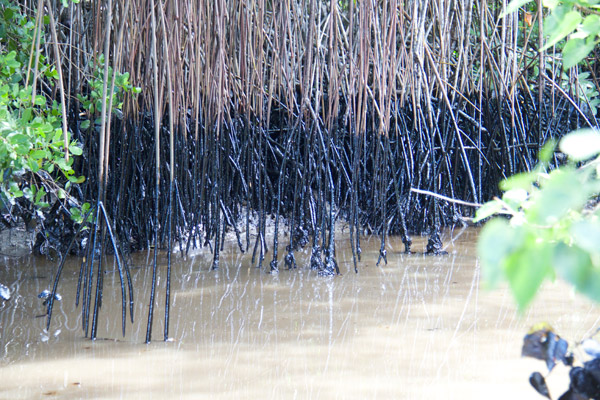 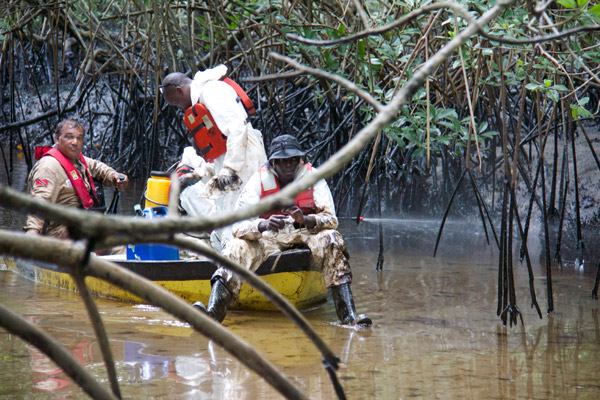 Clean up crew in the Gulf of Paria. Photo by: Marc de Verteuil.

(11/20/2013) The catastrophic explosion that spewed some five million barrels of oil deep into the Gulf of Mexico in April 2010 will take a heavy toll in the ocean’s lowest layers for years to come. That’s the stark conclusion of seafloor research conducted six months after the Deepwater Horizon oil spill. The study, published on August 7 in PLoS ONE, examined life in the Gulf’s deepest waters near the blowout, about 1.6 kilometers below the surface. Here, the researchers found that the damages will take decades to reverse.