An unusual species of mouth-brooding frog was likely driven to extinction by the fungus Batrachochytrium dendrobatidis (Bd), making an unusual example of ‘extinction by infection’, argue scientists writing in the open-access journal PLOS ONE.

A team of researchers led by Claudio Soto-Azat of the Universidad Andres Bello in Santiago and the Zoological Society of London (ZSL) took samples from hundreds of preserved specimens of Darwin’s frogs (the northern Darwin’s frog Rhinoderma rufum and the southern Darwin’s frog Rhinoderma darwinii) that were collected from the wild between 1835 and 1989 and looked for the presence of Bd, a fungus that causes the disease chytridiomycosis. They also collected samples from surviving wild populations of Rhinoderma darwinii from Chile and Argentina.

The researchers found high prevalence of Bd at sites that had experienced Rhinoderma extinction or severe population declines, indicating a likely link between the disease and population collapse.

“Only a few examples of the “extinction by infection” phenomenon exist,” said study co-author Andrew Cunningham of ZSL in a statement. “Although not entirely conclusive, the possibility of chytridiomycosis being associated with the extinction of the northern Darwin’s frog [Rhinoderma rufum] gains further support with this study.”

Rhinoderma rufum has not been seen in the wild since 1980. Rhinoderma darwinii still survives in temperate forests in Chile and Argentina. 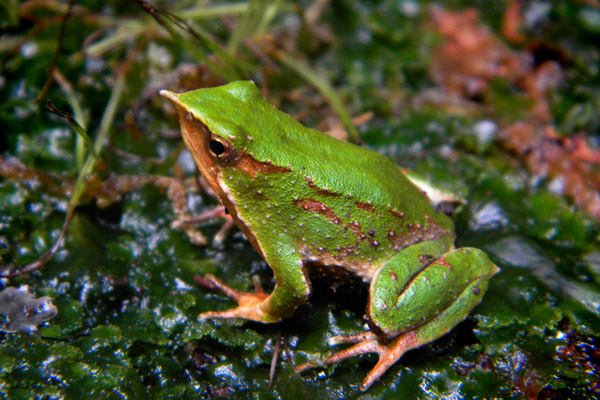 Both Rhinoderma are known for the unusual approach they employ to protect their young: males incubate froglets in their vocal sacs.

The species are named after Charles Darwin who first discovered Rhinoderma darwinii in 1834.

Chytridiomycosis or chytrid outbreaks have been killing frogs and other amphibians at sites around the world. While the exact cause of the disease is unknown, its spread is thought to be facilitated by hikers and researchers who transport fungal spores in the treads of their shoes.