As temperatures increase worldwide due to anthropogenic climate change, scientists are scrambling to figure out if species will be able to survive rapidly warming ecosystems. A new study in Global Change Biology offers a little hope. Studying reptiles and amphibians in the Philippines, scientists say some of these species may be able to seek refuge in cooler microhabitats, such as tree holes or under the soil, in order to stay alive during intensifying heatwaves. But, the scientists’ stress, the shelter from microhabitats can only protect so far.

“These small habitats, known as microhabitats, include tree holes, logs, and plants that exist within the rainforest strata and they provide cooler temperatures within them than the air that surrounds them,” explains lead researcher Brett Scheffers with James Cook University.

Scheffers and his team studied whether or not such microhabitats would truly provide cool refuges for animals during extreme weather by looking at 15 species of amphibians and reptiles on Luzon Island in the Philippines.

“Microhabitats have extraordinary potential to buffer climate and likely reduce mortality during extreme climate events,” the scientists add, an assessment that agrees with other studies across the tropics.

Nonetheless, microhabitats are meant as short-term refuges; they could be utilized to survive periodic heatwaves, but not climatic upheaval. If average temperatures rise too high, species will be forced to migrate to a different climate—such as to higher altitudes— in order survive instead of depending on microhabitats for short term refuges. However scientists fear that many species will not be able to migrate quickly enough and will be pushed to extinction.

“Our study is a cautionary tale. Biodiversity is resilient and adaptive, however, with future forecasts predicting annual temperature increases of up to 4-6 degrees Celsius and in some areas extreme temperatures that surpass 40 degrees Celsius, there are simply no habitats cool enough to safeguards species from such extremes,” notes Sheffers.

The world’s government have pledged to keep global average temperatures from rising 2 degrees Celsius above pre-industrial levels, however experts say nations are currently moving too slowly to hit that target. 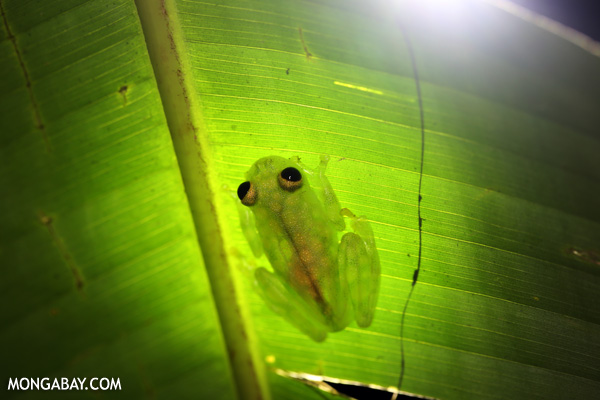 A glass frog in Costa Rica. Photo by: Rhett A. Butler.