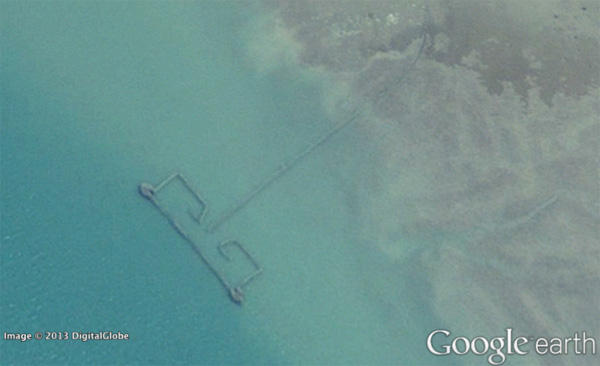 Google Earth has been once again used by researchers for scientific discovery.

Researchers from the University of British Columbia scoured Google Earth in search of fishing weirs along the coasts of seven Persian Gulf nations. They found some 1,900 fish traps, suggesting that the total fish catch in the Persian Gulf may be up to six times the officially reported level of 5,260 metric tons per year.

The findings, published in ICES Journal of Marine Science, indicate that the traditional fishing approach — which is used widely around the world — has a larger impact than conventionally believed.

“This ancient fishing technique has been around for thousands of years,” said Dalal Al-Abdulrazzak, a PhD student with the UBC Fisheries Centre’s Sea Around Us Project and the study’s lead author, in a statement. “But we haven’t been able to truly grasp their impact on our marine resources until now, with the help of modern technology.”

The methodology could be used in other regions to provide more accurate fishing estimates, according to co-author Daniel Pauly, the principal investigator with the Sea Around Us Project.

“Time and again we’ve seen that global fisheries catch data don’t add up,” said Pauly. “Because countries don’t provide reliable information on their fisheries’ catches, we need to expand our thinking and look at other sources of information and new technologies to tell us about what’s happening in our oceans.”

The findings, published in ICES Journal of Marine Science, provide another example of scientists using Google Earth for research. The tool has been used to discover a previously unknown reef off Australia; to document how mammals tend to align themselves in a north-south direction with the Earth’s magnetic field lines; to identify unexplored forests; and to map deforestation.

Google Earth is also being used to publish results of research, according to Mark Mulligan of the Environmental Monitoring and Modeling Group at King’s College, London.

“Many scientists are publishing the results of their studies (maps and imagery) in Google Earth as a means of enabling policy makers to engage better with the policy outcomes of scientific research,” Mulligan told Mongabay.com in 2009.