Commentary by Owen Reynolds on 28 October 2013

The link between good economic policy and climate change mitigation is instigated by policies such as the triple-bottom line, carbon limitations, and pro-environmental legislation. However, economic inequality is a little explored piece of the successful fight against climate change. For climate change mitigation and good economic policy to work, economic growth must be broad-based.
Indeed, the inability for the United States to make a coherent and progressive stance on climate change has effectively stymied the global initiative—and is in part due to growing inequality. Due to the nation’s market size and political power, U.S. policy is often a decisive factor for many global issues.

Climate change policy is no different. The Kyoto Protocol, ratified during the 2001 Marrakesh Accords, was designed to create a cap-and-trade system to price and, thereby, reduce carbon emissions. The Protocol artificially created demand for carbon reduction credits by limiting a nation’s carbon emissions, and decreasing that limit each year. However, the Kyoto Protocol has largely been seen as ineffective.

Why? Not discounting faulty administration of the plan, the nail in the coffin was the lack of demand for carbon reduction credits. The U.S. Senate and President George W. Bush refused to ratify the Protocol, citing as their reason that developing nations were not yoked to the same binding emission reduction targets. Because the mammoth American economy was not legislated to “demand” carbon reduction credits, there was never enough supply. This undermined the international political and financial integrity of the initiative.

One reason why American leaders were not compelled to ratify the Kyoto Protocol was public apathy on the subject. While one contingent was vocal, the movement was not the groundswell that it had become in Europe. This apathy is rooted in several factors, one of which was income inequality. When there is a high degree of inequality between the members of a society, the concept of “relative poverty” becomes potent.

Relative poverty means that an individual may not necessarily be poor on the global scale. However, when compared to very rich neighbors, that same individual may feel left out and often focus all their energy on achieving a higher socioeconomic level. Or worse yet, they may feel resentment over being disenfranchised. Either way, relative poverty leaves a large portion of a populace distracted from long-term or “big picture” issues. The poor do not feel they have the financial lee-way to focus on anything other than just getting by.

If a group of people feeling constrained by lack of financial leeway is broad enough (i.e., not just a small portion of the underprivileged), the masses will not be concerned with much beyond immediate goals. Economist Jeffrey Sachs of the Earth Institute has written widely on the subject of the poverty trap in developing nations and insinuates that the broken institutional infrastructure extends the rules of the poverty trap to the United States. 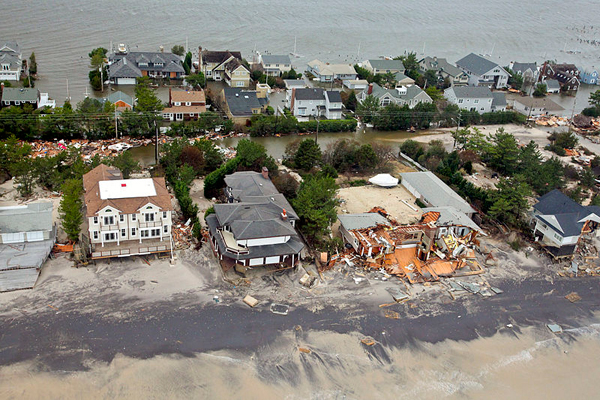 Damage to the town of Mantoloking, New Jersey from Hurricane Sandy. Photo in the public domain.

A poverty trap happens when a negative feedback loop at a certain socioeconomic level results in a self-perpetuating cycle. It can and does exist in developed countries as well as developing countries. Out of necessity, families without financial stability often focus on immediate needs, lack foresight, and suffer from considerably higher stress levels which lead to difficulty concentrating. These traits are taught to the next generation, feeding back to encourage decision-making that is narrow and focused on the short-term. Where this feedback loop leads to increasingly negative outcomes marks the poverty trap.

The poverty trap in a country like the U.S. can lead to an apathetic and uneducated electorate incapable of considering long-term issues like climate change mitigation. Indeed, the single most important feedback cycle of the poverty trap is education. Lack of social safety networks and good public education results in a higher probability that children will slip through the cracks and form a generation of increasingly less-educated individuals.

A well-educated electorate depends on a broad, informed middle class with a solid economic footing. There are many measurements that show America’s diminishing middle class. The oft-touted “Graph of The 1%”—the percent of income distributed to the top one percent of the American populace—shows that income inequality is higher than it has been since the Great Depression.

Nobel Laureate Economist Joseph Stiglitz helps to lead this discussion in publications such as The Price of Inequality: How Today’s Divided Society Endangers Our Future. Stiglitz describes the many maladies that inequality has created and paints the environment as one of the victims of American inequality. He even says that environmental damage has been exacerbated by corporate media consolidation side-lining the issue, as well as lack of political independence from funders.

The nebulous nature and global complexity of the climate change issue must be faced by leaders representing a broad-based, well-educated populace. Without widespread education and prosperity, access to the information necessary to push for intangible issues like climate change is beyond the public’s reach.

As Earth reaches new heights of atmospheric carbon concentrations, the urgency of slowing greenhouse gas emissions is at a paralleled high point. Affecting this global change requires the enfranchisement of American legislative bodies powered by an educated populace. However, if we don’t widen the income base and steer families into the realm of financial stability, we may not ever have that social catalyst. There are ways of broadening income and strengthening the middle class. For the sake of our shared climatic future, we need to broaden economic development to all. 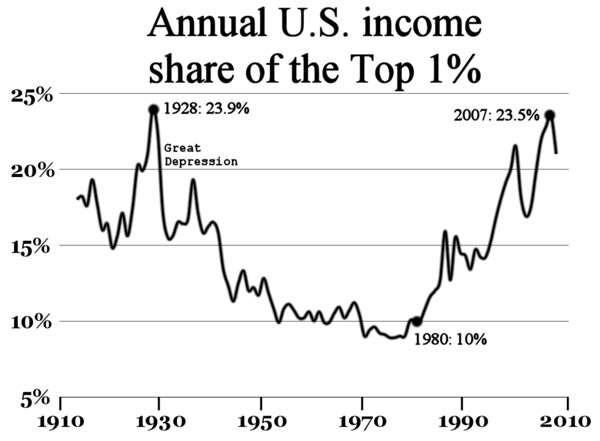 Economic inequality in the U.S. as shown by income percentage held by top 1 percent. Chart by: RoyBoy/Creative Commons 3.0.

(10/01/2013) The world’s leading climate scientists have set out in detail for the first time how much more carbon dioxide humans can pour into the atmosphere without triggering dangerous levels of climate change—and concluded that more than half of that global allowance has been used up.

‘Yet another wakeup call’: global warming is here, it’s manmade, and we’re not doing enough to stop it