Deforestation for palm oil production in Borneo. Photo by Rhett A. Butler

Palm oil imports into Europe for use as car fuel increased by more than three-fold since 2006, raising concerns than renewable fuels targets may be contributing to deforestation, displacing marginalized communities, and driving greenhouse gas emissions in Southeast Asia, finds a new study published by the International Institute for Sustainable Development (IISD).

The report, published today, finds that 80 percent of the European Union’s increase in palm oil consumption between 2006 and 2012 was due to increased use for biofuel production. Use in food and cosmetics remain almost flat during the period.

The Netherlands, the largest palm oil consumer in Europe, saw its use of palm oil for biofuels spike 9500 percent from 5,000 tons to 480,000 tons over the period. 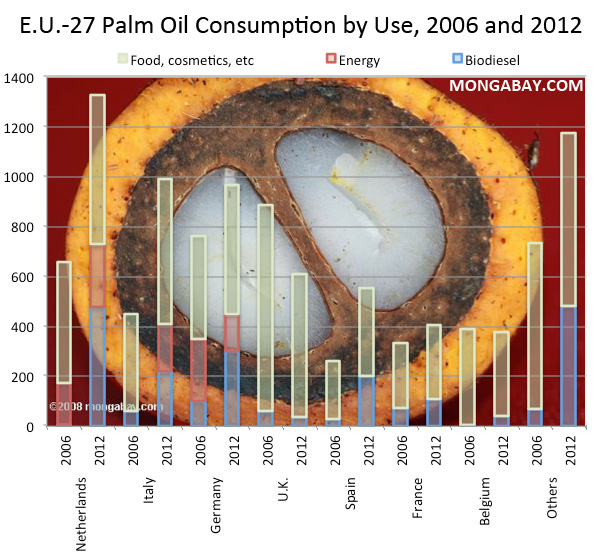 The findings suggest that producers in Malaysia and Indonesia are making inroads in a critical market for biofuels. The E.U. has mandated that at least ten percent of the European fuel market for transport be met by renewable energy sources by 2020. But a proposal — up for vote Wednesday — would cut that target in half, limiting the amount of biodiesel that can be produced from food-based crops.

The numbers also indicate that lower palm oil prices may be creating new markets for the vegetable oil, which is typically used as a cooking oil; a fat in processed foods, soap, and cosmetics; and for industrial purposes. Until recently, high palm oil prices made conversion for biofuels an unattractive option, but with prices down roughly 40 percent off their highs, using palm oil as a feedstock for biodiesel is now lucrative proposition. 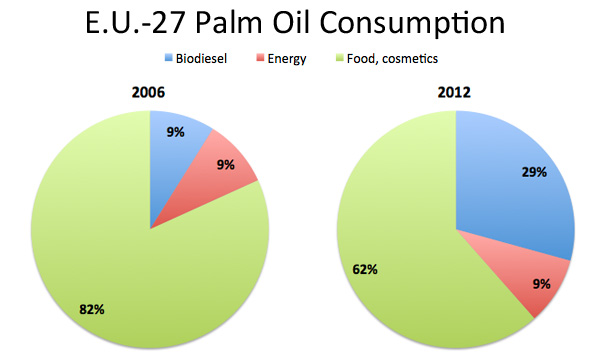 More than 85 percent of palm oil — which is produced from the fruit of the oil palm — is produced in Indonesia and Malaysia. Much of the crop’s expansion has taken place at the expense of wildlife-rich rainforests and carbon-dense peatlands, making palm oil a target for environmental campaigners, who see it as a potential threat to endangered species, climate, and traditional communities.

Accordingly, Friends of the Earth (FOE) Europe, the activist group that commissioned the IISD report, urged the E.U. to approve the proposal to cut the biofuels mandate.

“Palm oil is driving mass deforestation, wildlife loss, community conflicts, and accelerating climate change,” said Robbie Blake, biofuels campaigner for Friends of the Earth Europe, in a statement. “It is alarming to find that palm oil use in European cars is sky-rocketing, and will only increase further, unless MEPs put a halt to increasing biofuels. Drivers are unknowingly being forced to fill up with a fuel that is destroying rainforests, communities and the climate.”

Nur Hidayati, head of campaigns for WALHI/Friends of the Earth Indonesia, added that capping the amount of crop-based biofuels used in European cars could help reduce social conflict over palm oil in Indonesia.

“Civil society organizations in southern countries have watched the development of Europe’s biofuels policy with anxiety,” said Nur. “This enormous increase in palm oil demand in Europe is escalating deforestation, land grabbing, and conflicts in Indonesia. Biofuels demand must be capped and reduced otherwise Europe will only intensify the problems for Indonesian people affected by palm oil expansion.”

Palm oil production is today one of the biggest drivers of deforestation — and the largest driver of peatlands degradation — in Indonesia. Data released by Greenpeace last week suggests that up to a quarter of all deforestation in Indonesia between 2009 and 2011 could be attributed to palm oil. Greenpeace is pushing for stronger sourcing policies to encourage palm oil producers not to clear natural forests and peatlands for new plantations.

Growing concerns over the environmental impact of palm oil has provoked an industry response. The Roundtable on Sustainable Palm Oil (RSPO) is a multistakeholder body that sets social and environmental criteria for palm oil production. It aims to create a “safe” label for palm oil sourced under the standard. Yet some environmental groups, including FOE Europe and Greenpeace, say the initiative is still too weak and call for buyers to demand more stringent safeguards for palm oil sourcing. Meanwhile some producers complain that the premium for certified palm oil is too small to justify the effort.

However, most palm oil is consumed in countries where consumers show little preference for environmental standards: Indonesia, India, China, Malaysia, and Pakistan. Therefore the direct impact of certification generally remains limited to “premium” markets like Europe and the United States, making the issue a difficult one to address for environmentalists, who are also challenged by the crop’s productivity, which makes it both a cheap source of cooking oil and a profitable investment.