Around 2 million people face food insecurity in northern Namibia and southern Angola as the worst regional drought in decades takes its toll, according to the UN. Two years of failed rains have pushed families into desperate conditions in a region already known for its desert-like conditions. In Namibia alone, experts estimate that over 100,000 children under five are at risk for acute malnutrition.

“Climate change and environmental pressure are making life increasingly difficult for the poorest and most marginalized in remote communities, where daily life is already very challenging for children. Food and water shortages now increase the likelihood of disease and malnutrition,” says Steven Allen, Regional Director for UNICEF Eastern and Southern Africa. “Reports from the field already indicate that children are dropping out of school and are being separated from their parents, a clear sign of the stress and vulnerability families face as they try to cope with the drought.”

Scientists say climate change will worsen extreme weather, such as droughts, worldwide, perhaps even making parts of the world virtually uninhabitable. However, currently, the regional impacts remain more difficult to assess. Still, many in southern Africa see decades of below average precipitation combined with failed rains as indicative of a warming planet.

When declaring a state of emergency in May, the President of Namibia, Hifikepunye Pohamba, noted the impacts of climate change.

“Humanity must find ways and means of mitigating its effect,” he said as reported by the Associated Press.

Many people in the region make their livelihood through livestock, but drought makes it difficult to keep herds alive. When a family loses its livestock it often becomes difficult to pay for food.

UNICEF is asking for $21.7 million for its efforts in Namibia and Angola. To date, the Namibian government has provided $20.7 million for drought relief to its impacted population. UNICEF warns that the unstable situation is expected to worsen in coming months. 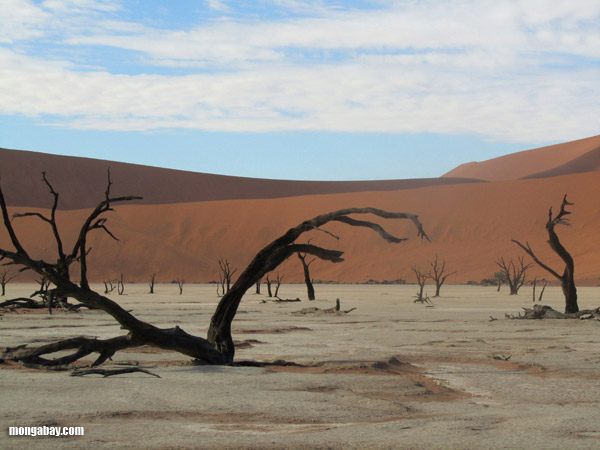