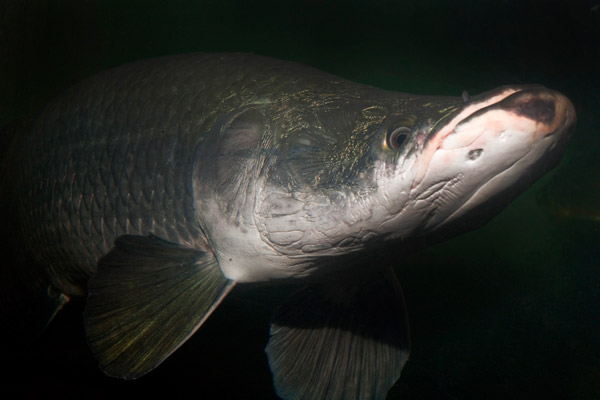 Let’s go back some 14,000 years (or up to 50,000 depending on who you talk to), since this is the first time humans encountered the meandering, seemingly endless river system of the Amazon. Certainly, the world’s first Amazonians would have been astounded by the giant beasts of the region, including ground sloths and mastodons (both now extinct), as well as giant anteaters, armadillos, and tapirs, currently the biggest land animal on the continent. But these first explorers might have been even more surprised by what dwelled in the rivers: anaconda, caiman, and the arapaima. Wait, the what?

“Arapaima are like living fossils, they are among the oldest [freshwater] fish on the globe. Only found in the Amazon and Essequibo River drainages, they are among the largest freshwater fish in the world reaching up to ten feet in length!” explains Lesley DeSouza with Chicago’s John G. Shedd Aquarium, which is supporting conservation efforts of the arapaima in Guyana.

Due to its massive size and the fact that its virtually unchanged in the fossil record for 23 million years, DeSouza says the arapaima has become known as the “dinosaur fish.” And while the species never actually lived during the time of the dinosaurs, its primeval appearance certainly brings the popular image of prehistoric beasts to mind.

This monster fish can weigh between 200-400 pounds (90-180 kilogram), and likely served as a hugely-important food source for the first peoples of the Amazon, just as it does for many indigenous tribes today. Although the bulk of the arapaima is the most instantly noticeable feature of the fish, many aspects of its natural history set it a part. 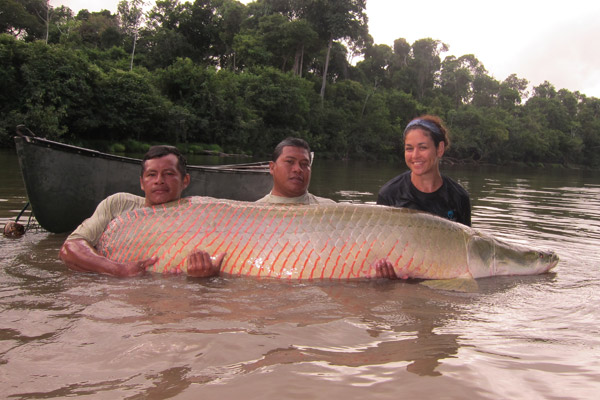 “Arapaima are obligate air breathers, which means they have to come up for air every 10–20 minutes,” DeSouza told mongabay.com. Arapaima evolved this behavior due to low oxygen levels in Amazon rivers; while the fish do not have proper lungs, they have evolved special tissue in its swim bladder that process oxygen.

Until humans arrived on the scene, arapaima were the top predators in their river systems. Nothing dared eat them, for they sport incredibly tough, but flexible, armored scales that can’t even be penetrated by piranha teeth; the scales are so effective that engineers are studying them for modern applications.

However, their need to come up for air every ten minutes or so made them suddenly vulnerable to the new species on the scene: Homo sapiens armed with spears. Ever since then—for tens of thousands of years—humans in the Amazon have depended on arapaima as a vital protein source. But overfishing in the Twentieth Century led to a massive decline in arapaima in many parts of their range. Several conservation laws have been passed to better-regulate fishing of the species, but many populations have yet to recover and new threats are rising.

Still, in remote parts of the Amazon—such as the Rewa River in Guyana—arapaima remain abundant.

“I traveled up this river drainage for over a month I noticed the high densities of arapaima found in this system compared to other regions,” DeSouza says. “By joining the John G. Shedd Aquarium as a postdoctoral research associate, I was able to design a project to expand on knowledge of basic arapaima biology that can support their long-term conservation.” 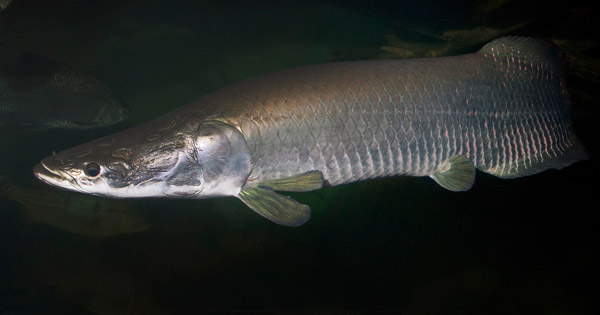 But the project included one difficult component: tagging arapaima. It’s one thing to spear, harpoon, or net an arapaima, but catching, handling, and tagging a three hundred pound giant with one’s bare hands was another matter altogether.

“Several months ago I was skeptical (as was my team) that we would be able to tag fish bigger than myself,” says DeSouza. “With great help from local villagers and field assistants, we were able to tag 20 arapaima. I am currently at the beginning of tracking the tagged arapaima in the wet season and they are on the move. Water is rising fast and the fish are heading up river.”

Despite arapaima’s role in indigenous life, scientists know little about them. DeSouza is working to change that by discovering the giant fish’s migration routes.

“Key to protecting arapaima is knowing more about the basic biology of the species. […] Understanding their basic movements is important to determine critical sites for feeding and reproduction, in addition to the extent of a drainage they use,” DeSouza explains, noting that such data will help conservationists develop protected areas and management plans in Guyana. The mysteriousness of arapaima behavior is magnified by the fact that separate populations appear to behave differently.

“Additionally, working closely with indigenous communities I have heard many anecdotal accounts of undocumented arapaima behavior,” DeSouza notes. “This is certainly a gap we need to fill in arapaima research.”

Although not nearly so recognizable to the outside world as jaguars and giant anteaters, in Rewa Village, at least, arapaima have become “a symbol of great pride,” according to DeSouza.

“For many years they overfished arapaima for income. They began seeing fewer and fewer arapaima and realized they were threatening their natural resources. After a pledge to no longer harvest arapaima, they currently contain the highest density of arapaima in Guyana.” 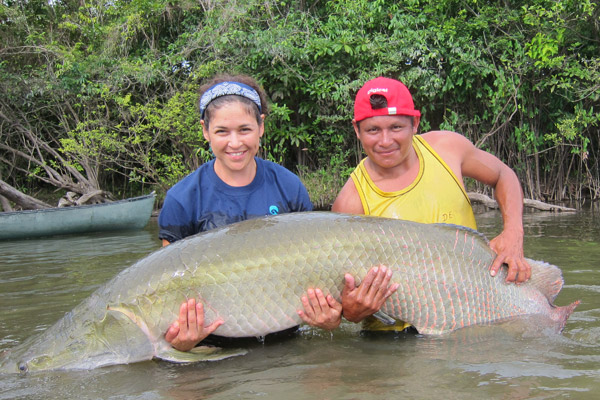 Since arapaima have given so much to human communities for tens-of-thousands of years, perhaps it’s only fair that we begin to give back.

“The wider public can help by supporting local communities making conservation efforts to protect arapaima and other species,” DeSouza says. “Several communities like Rewa Village (Rewa Eco-lodge), Karanambu (Karanambu Eco-Lodge), Yupukarri Village (Caiman House) and Surama Village (Surama Eco-Lodge) all highlight the flora and fauna as their main attraction and are committed to protecting their natural resources. The wider public can also help by supporting Shedd as we continue and expand work in critical conservation areas.”

Scientists have long focused on studying the terrestrial animals of the Amazon, but the river system supports some of the most diverse freshwater communities in the world. The Amazon River by itself (not including tributaries) holds more than 3,000 freshwater species, and many species remain undiscovered, let alone the subject of any research. Worse still, a 2009 report found that around the world freshwater species were four to six times more likely to go extinct than land or marine counterparts. But a new group of scientists—like DeSouza—are working not only to better understand freshwater species, but save them before it’s too late. Certainly, the arapaima is as vital to the Amazon as any of it’s giant land cousins.

“Arapaima have a majestic presence,” DeSoua says. “Before handling arapaima I would see them rolling and watch in awe: their large bony head rising up for air and gently entering back in the water flashing their red-flecked scales. When I first encountered one I was in a position of complete respect for the fish. Even after handling more than twenty in my research, it still feels like a surreal experience to interact with a living dinosaur.” 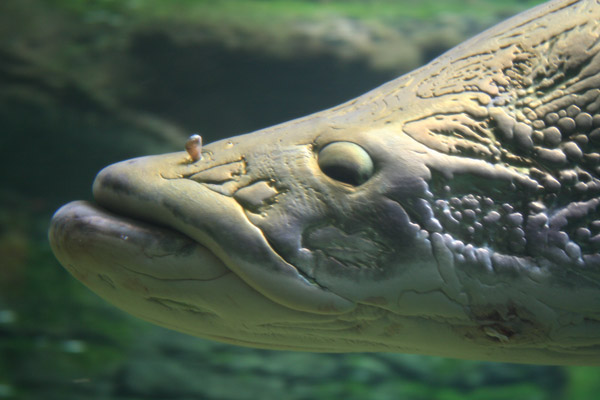 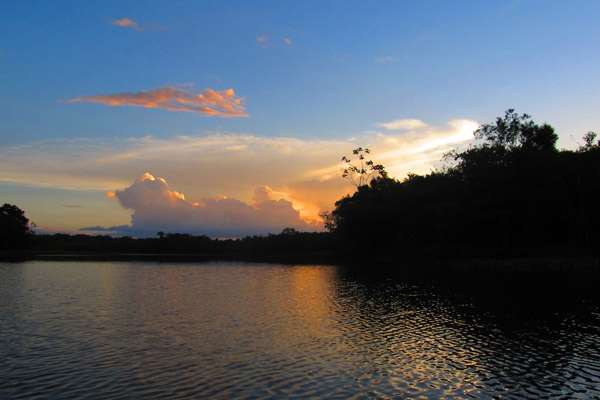 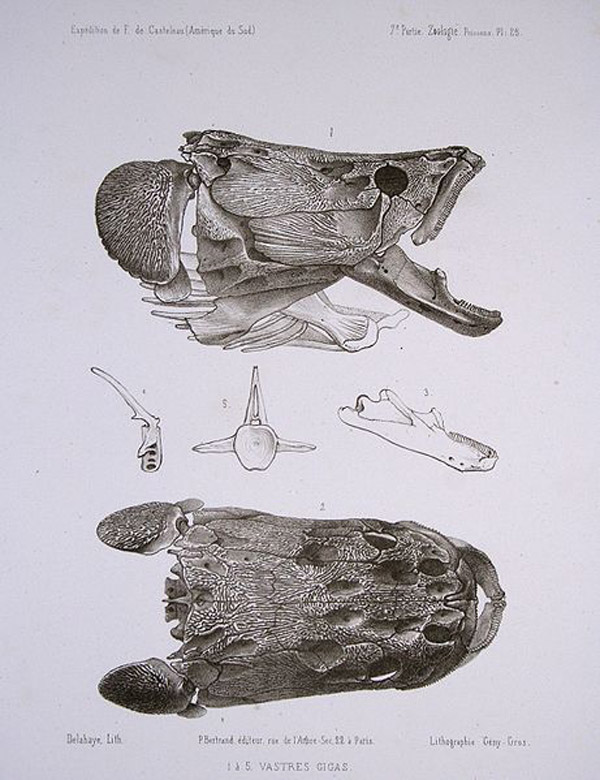 (06/28/2012) When you read the words ‘Sumatra’ and ‘Endangered Species’ in the same sentence there is a 99 percent chance that you will be reading about one of four animals: orangutans, tigers, elephants, or rhinos. These big four of Sumatra have become the rallying cry to save the island’s ever-dwindling forests. This is not surprising, given that these species include some of the world’s most publicly beloved animals and, in addition, they are all considered Critically Endangered by the IUCN Red List. But by dominating the headlines in Sumatra’s deforestation crisis, these four species often overshadow the thousands of other species found on the island, many of which also face extinction. In fact when you read the words ‘Sumatra’ and ‘Endangered Species’ you will almost certainly not be reading about the Sumatran striped rabbit.

(01/31/2012) The word “cattle,” for most of us, is the antithesis of exotic; it’s familiar like a family member one’s happy enough to ignore, but doesn’t really mind having around. Think for a moment of the names: cattle, cow, bovine…likely they make many of us think more of the animals’ byproducts than the creatures themselves—i.e. milk, butter, ice cream or steak—as if they were an automated food factory and not living beings. But if we expand our minds a bit further, “cattle” may bring up thoughts of cowboys, Texas, herds pounding the dust, or merely grazing dully in the pasture. But none of these titles, no matter how far we pursue them, conjure up images of steamy tropical rainforest or gravely imperiled species. A cow may be beautiful in its own domesticated sort-of-way, but there is nothing wild in it, nothing enchanting. However like most generalizations, this idea of cattle falls to pieces when one encounters, whether in literature or life, the banteng.

(07/12/2011) Evolution is a bizarre mistress. In her adaptation workshop she has crafted parrots that don’t fly, amphibians with lifelong gills, poison-injecting rodents, and tusked whales. In an evolutionary hodge-podge that is reminiscent of such mythical beasts as chimeras and griffins, she has from time-to-time given some species’ attributes of others, such as the marine iguana who is as happy underwater as a seal, the duck-billed platypus that lays eggs like a reptile, and the purple frog that has a lifestyle reminiscent of a mole. Then there’s one of her least-known hodge-podges: the fish who ‘walks’ with hands instead of swimming.

(05/03/2011) With their long snout, furry body, soft eyes, and, at times, upright stance, tree kangaroos often remind me of the muppets. Of course, if there were any fairness in the world, the muppets would remind me of tree kangaroos, since kangaroos, or macropods, have inhabited the Earth for at least 5 million years longer than Jim Henson’s muppets. But as a child of the 1980s, I knew about muppets well before tree kangaroos, which play second fiddle in the public imagination to their bigger, boxing cousins. This is perhaps surprising, as tree kangaroos possess three characteristics that should make them immensely popular: they are mammals, they are monkey-like (and who doesn’t like monkeys?), and they are desperately ‘cute’.