When deciding whether or not to clear a patch of rainforest land for development, scientists are often called in to quantify how many different species exist there. But determining the number of rare and threatened species living in a section of jungle isn’t easy. If they are very rare, the individual members of the species will be hard to find; if the area being surveyed is along a steep slope it may be difficult to access the area; if there are lots of species to identify, you might need to hire a dream team of biologists—each specialized within a different area of biodiversity—and that can get expensive. However a new study in the Proceedings of the Royal Society Journal by an international group of scientists suggests a more cost-effective and efficient way to rapidly assess local biodiversity: instead of spending time and money looking at everything—searching for rare and threatened individuals in a forest patch or on a hillside—focus instead on the biological difference which can easily be determined within a few, easy-to-find, common species.

“We show how regions where common species exhibit high genetic and morphological divergence among populations can be used to predict the occurrence of species of conservation concern,” Trevon Fuller, postdoctoral researcher at the Center for Tropical Research at UCLA, told mongabay.com.

Scientists from UCLA, Boston University, Stony Brook, and the Universities of Florida Gainseville, North Carolina, Arizona, Texas, as well as from institutions in Ecuador, Spain, and the UK, hypothesized that there would be more threatened species at selected sites based on intraspecific (in a single species) variation within common species.

While past studies have found correlations between diversity within a single species and the total number of species in an area, they have not focused on conservation.

“The new contribution of our work is to show that genetic and phenotypic diversity within species is a good predictor of species that face a high risk of extinction because they have small ranges or are experiencing rapid habitat loss,” Fuller explains.

The scientists chose western Ecuadorian rainforest for their research. They focused on quantifying genetic variation and morphological or phenotypical variation (observable variation in the form, appearance, or structure of organisms, i.e. their specific structural features) among easy to find, common species. Threatened by human impacts, this biodiversity hotspot represents a transition zone between humid and dry tropical forests.

“We analyzed Ecuador west of the Andes, which is a global hotspot of plant and bird endemism…The diversity of this area is due to the fact that it is a transition zone between dry forest and rainforest. However, the area is also under threat due to high rates of deforestation for timber extraction and the expansion of cattle pastures,” Manuel Peralvo, Geographer at The Consortium for the Sustainable Development of the Andean Ecoregion (CONDESAN, Consorcio para el Desarrollo Sostenible de la Ecorregión Andina, told mongabay.com.

The study site was chosen for its steep slopes and hillsides (“elevational gradients”), areas that Peralvo explains are especially worthy of conservation focus as they support a high number of threatened specialist and niche species.

“Specific areas with elevational gradients also have some of the last forest remnants in western Ecuador since lowlands have already been cleared. As a result, they are subject to accelerating deforestation pressures providing key refuges for a high number of threatened species,” Pervalo adds.

The scientists chose three birds, three bats, and one frog species (to serve as proxies for threatened species) along the gradient because they were abundant and easily sampled, in addition to representing a range of different niches, locations, diet types, altitudes, and life histories. The scientists also surveyed select plants of conservation concern, representative of vegetation communities at high risk of deforestation. They focused on the intraspecific differences (variations observed within a single species) of the seven common populations to predict the presence of dozens of threatened Ecuadorean species.

“We analyzed a diverse set of 29 threatened species that are hard to sample including mammals such as jaguars and ocelots, birds including the Guayaquil woodpecker, and plants. We also analyzed a set of seven common species that are easy to sample including bats, birds, and a frog,” Fuller explains. “We had genetic for five of the common species and phenotypic data (such as wing length) for all seven. We found that genetic and morphological diversity within common species was a better predictor of threatened species than the number of species at a site, or environmental variables such as precipitation, temperature, or elevation.”

In fact, sites selected based on genetic and morphological divergence of common species contained a higher proportion of threatened species than any other method, including sites selected at random or regions selected using environmental variables or bird and amphibian occurrences as a proxy.

“Intraspecific variation of common species of birds, bats and frogs from Ecuador were found to be a significantly better predictor for the occurrence of threatened species than suites of environmental variables or the occurrence of amphibians and birds. Fully 93 % of the threatened species analyzed had their range adequately represented by the geographical distribution of the morphological and genetic variation found in seven common species,” Fuller explains.

Thomas B. Smith, Director of the Center for Tropical Research at UCLA and Professor in the Institute of the Environment and Sustainability and the Department of Ecology and Evolutionary Biology explained to mongabay.com the significance of these findings: “Biodiversity surveys have the goal of inventorying all species in a region but don’t usually collect genetic data… surveys could be more effective if they incorporated genetic data.”

Adoption of such techniques could result in changes to how biodiversity conservation is practiced.

“Biodiversity surveys in remote areas have the goal of inventorying all species in a region, especially rare and threatened one,” Fuller says. “However, such approaches are often costly and require dispatching large teams of experts. In contrast, it is relatively easy to measure genetic and morphological diversity of common species.”

Genetic sampling of common species is now a viable alternative to the traditional (time and personnel intensive) biodiversity site assessment practices due to decreasing costs of technology.

“With the advent of next generation sequencing, the cost to sequence a genome is decreasing even faster than Moore’s Law, which is a 50% decrease every two years,” Smith says. “For example, it cost $10,000 to sequence one megabase of DNA in 2001, but only 10¢ this year! This makes it practical to include genetic data in real world conservation planning.”

The authors write, “This has the potential to significantly decrease the time and cost of biodiversity assessments, making it possible to carry out a greater number of assessments each year.”

Such advancements in technique and method could not come at a better time for conservation in tropical forests, where a huge expanse of forest has already been lost. If conservation is to successfully protect threatened species and their habitats, “there is an urgent need for tools to identify and prioritize biodiversity conservation gaps in Ecuador, and to mainstream these tools into key decision making processes aimed at conserving and managing biodiversity,” Peralvo told mongabay.com.

With such obvious benefits and urgent need, the authors recommend adoption of this new approach to biodiversity assessment.

“Predicting where threatened species occur is useful for making informed conservation
decisions…We suggest that collecting data on genetic and morphological variation in common species can be a cost-effective tool for conservation planning, and that future biodiversity inventories include surveying genetic and morphological data of common species whenever feasible,” Fuller concludes.

Protecting nature often comes down to cost and utility. In their conclusion, the authors write “Whether this tool can be implemented in real-world conservation planning will depend largely on economic cost: if collecting genetic samples from common species and analyzing genetic and morphological data is less expensive than surveys to detect threatened species, then our method will have practical utility for governmental agencies and conservation NGOs”. 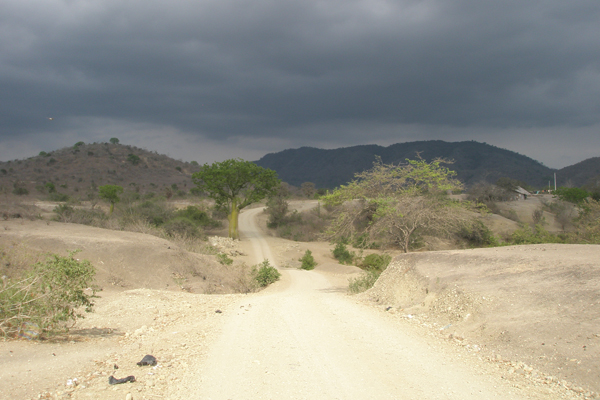 An example of ecological turnover along an altitudinal gradient in western Ecuador: vegetation is sparse in lowlands (foreground) but increases substantially at higher elevations (background). Photo by: Manuel Peralvo.

(06/04/2013) The ‘Chewbaka’ bat, a cave-dwelling frog, and a diminutive elephant shrew were among hundreds of species documented during a one-month survey of a park that was ravaged during Mozambique’s 17-year civil war. The findings suggest that biodiversity in Gorongosa National Park in Central Mozambique is well on the road towards recovery, opening a new chapter for the 4,000-square-kilometer protected area.

(05/20/2013) Human-caused changes to our biosphere—the global total of the world’s ecosystems—are now so great and alarmingly rapid that human lives and societies undoubtedly face epic challenges in the near future as our biosphere deteriorates, planetary boundaries are reached, and tipping points exceeded. We may survive, we may painfully adapt, but it is a fair bet that grave hardship, loss, and sacrifice lay ahead. The nature and extent of impacts among human populations hinges on how successfully we respond to the biosphere crisis with extraordinary leadership, balanced solutions applied at global scales, and unprecedented cooperation—or not.