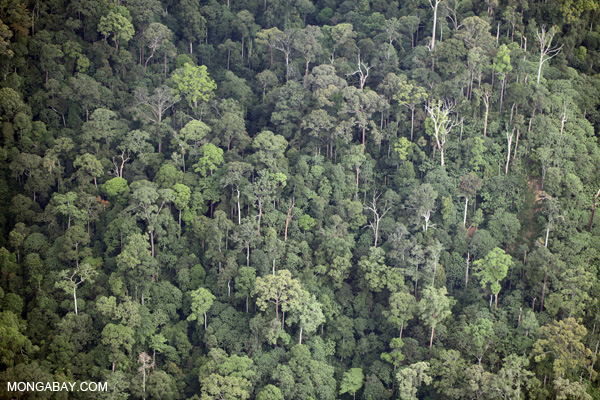 Protected forest in Sabah. Photo by Rhett A. Butler

The Sabah Forestry Department has reclassified 63,700 hectares of rainforest zoned for logging as protected areas.

The move comes as part of the department’s effort to set aside large areas of intact and selectively logged forests for strict conservation. The region has the highest biodiversity on the island of Borneo and includes key habitat for endangered orangutans, Bornean clouded leopards, Sumatran rhinos, and pygmy elephants.

The reclassification also comes shortly after at least 14 elephants were poisoned within the Yayasan concession area. Commercial hunters employed by the plantation sector are leading suspects in the case, which remains unresolved.

“The elephant poisoning tragedy earlier this year was a rallying call, and we in the NGO community are ramping up our efforts and collaborating with government,” said Cynthia Ong, the Executive Director of Land Empowerment Animals People (LEAP), in a statement. “It is of particular importance that the private sector plays its part.”

“We wish to remind Forest Management Unit (FMU) license holders, and both oil palm and timber plantation companies at the borders of the newly upgraded areas of their accountability. Every effort must be made to ensure there is no encroachment into these forest reserves by poachers and others who may have their own motives.”

Beyond setting aside new conservation areas, the Sabah Forestry Department is also pushing concession holders toward less damaging forest management practices, including selective harvesting of secondary forests under standards set by the Forestry Stewardship Council (FSC). Destructive logging practices in the past is a large reason why revenue from timber within the Yayasan Sabah area are in decline. Declining timber revenue has lately created intense political pressure to re-gazette some of the forest estate for oil palm plantations, which environmentalists say could be a disaster for resident wildlife. Sabah already has a larger area of oil palm plantations than protected forests.

(04/18/2013) After three months, officials still don’t know for certain what killed at least 14 Bornean elephants (Elephas maximus borneensis) in the Malaysian state of Sabah. However tests do indicate that the herd perished from a “caustic intoxicant,” possibly ingested accidentally or just as easily intentionally poisoned. A distinct subspecies, Bornean elephants are the world’s smallest with a population that has fallen to around 2,000 on the island.

(02/28/2013) In an unusually bold statement catalyzed by the deaths of 14 rare elephants, six Malaysian NGOs today called on the Sabah state government to pursue ‘a more conservation focused agenda’ in managing the state’s forests. The demand comes shortly after the death of 14 endangered pygmy elephants — thought poisoned by an oil palm plantation developer — thrust Sabah’s environmental problems into the international spotlight.

Malaysia to phase out Borneo logging in parts of Sabah state

(03/16/2006) The Malaysian state of Sabah on the island of Borneo announced it will phase out logging in large parts of its remaining rainforests. Sabah, once home to some of the world’s most biodiverse forests, was largely logged out during the 1980s and 1990s but some parts of the state still support wild populations of endangered orangutans. In recent years, the Malaysian government has set aside protected areas and sponsored reforestation projects in the state.