A new report estimates that 258,000 people died in 2011 during a famine in Somalia, the worst of such events in 25 years and a number at least double the highest estimations during the crisis. Over half of the victims, around 133,000, were children five and under. The report, by the UN Food and Agricultural Organization (FAO), argues that the international community reacted too late and too little to stem the mass starvation brought on by government instability, conflict, high food prices, and failed rains, the last of which has been linked to climate change by some scientists.

“The suffering played out like a drama without witnesses,” said Philippe Lazzarini, UN Humanitarian Coordinator for Somalia, said as the report was released, adding “we could have done more before famine was declared on 20 July 2011…warnings that began as far back as the drought in 2010 did not trigger sufficient early action. In the worst affected areas, access to people in need was tremendously difficult.”

“There is consensus that the humanitarian response to the famine was mostly late and insufficient, and that limited access to most of the affected population, resulting from widespread insecurity and operating restrictions imposed on several relief agencies, was a major constraint,” the report reads. Between May and August 2011, deaths topped 30,000 a month.

The famine was the result of a combination of social conflict and failing rains. The worst-affected regions were under the Islamist group al-Shabaab, which was in conflict with the Somali transitional federal government. Al-Shabaab restricted donor access, declined emergency aid, and kept some from migrating. But western donors also played a role. According to Rob Bailey at the Guardian, western governments worsened the situation through draconian rules meant to keep resources from al-Shabaab but which instead kept aid from Somalians.

“In particular, US legislation meant that humanitarians working in Somalia could have been liable to prosecution in the US and up to 15 years in prison should the aid they were distributing be diverted to al-Shabaab,” Bailey with Chatham House writes. “These legal constraints were accompanied by onerous reporting requirements for agencies and their partners, and a significant decline in aid, which halved between 2008 and 2011.”

Many Somalians fled their country for aid camps in neighboring Kenya and Ethiopia, but many of these refugees died en route or on reaching the camps.

But the crisis would have never occurred if Somalia had not been suffering extreme drought. A study last year argued that La Niña conditions combined with climate change likely increased the chances of failing rains, which precipitated the famine.

“While many nonclimatic factors contributed to this crisis (high global food prices, political instability, and chronic poverty, among others) failed rains […] played a critical role,” the scientists wrote in the American Meteorological Society.

According to the researchers, sea surface temperatures in the Pacific and Indian Ocean have risen 0.7 degree, increasing the likelihood of failed rains in East Africa. Given already dry conditions and poverty, failing rains in the region can quickly lead to a food crisis and famine.

“While La Niña [conditions in 2011] had a large role to play in the failure of the rains in East Africa, there is evidence that warming in the western Pacific–Indian Ocean warm pool has contributed to an increased frequency of droughts in this region,” the researchers note.

According to the UN, some 2.7 million Somalis are still in need of international assistance.

“We are redoubling efforts to invest in Somalia’s people and communities to break the cycle of crisis and response,” says Lazzarini. 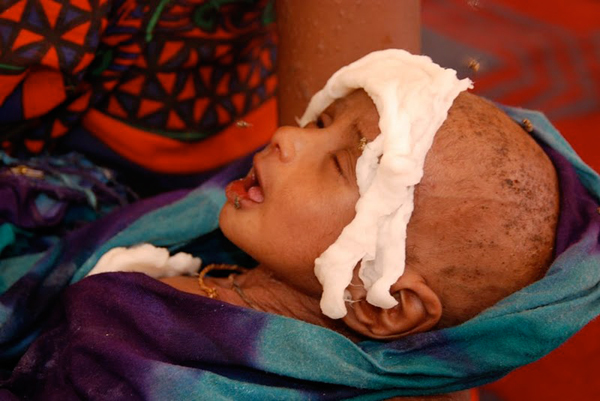 A severely malnourished child at Hilaweyn health facility, being held by his mother. Photo by: VOA – P. Heinlein. 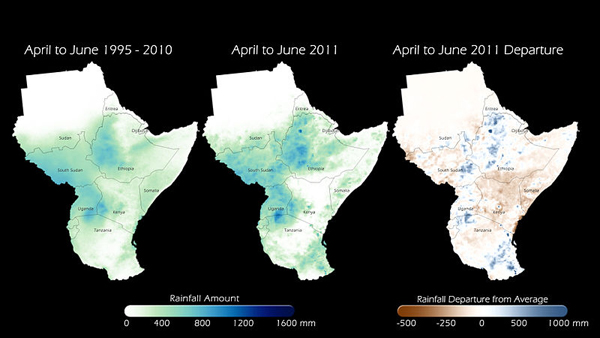 (09/14/2011) Millions of people across the Horn of Africa are suffering under a crippling regional drought and tens of thousands have died during the accompanying famine. Refuge camps in Somalia, Kenya, and Ethiopia are swelling with the hungry.

(08/28/2011) Over 12 million people across East Africa are imperiled by a hunger crisis brought on by extreme drought. The worst of the crisis is in Somalia, where famine has been declared in 5 areas of Somalia to date—the first famine to be declared by the UN in three decades. Somalia is unique, because here the drought has been exacerbated by a long-failed government and militants. Refugee camps have been set up in Kenya and Ethiopia, but are strained. A number of aid groups are working on the ground to provide emergency food and medical attention to hunger victims, but funding is still below what is needed. The largest group is probably the UN’s World Food Program (WFP). Mongabay.com spoke to Dena Gubaitis, Communications Officer for the WFP, for background on the famine and how relief efforts are going on the ground.

(08/04/2011) As the UN announces that famine has spread in Somalia to three additional regions (making five in total now), the US has put the first number to the amount of children under 5 who have so far perished from starvation in the last 90 days: 29,000. Nearly half of the total population of Somalia is currently in need of emergency food assistance. Yet, the al Qaeda-linked group al-Shabaab, which controls parts of Somalia, has made bringing assistance to many of the malnourished incredibly difficult, if not impossible. The famine in Somalia has been brought-on by lack of governance combined with crippling droughts throughout East Africa, which some experts have linked to climate change. High food prices worldwide and a lagging response by the international community and donors have made matters only worse.

Tens of thousands starving to death in East Africa

(07/20/2011) As the US media is focused like a laser on theatric debt talks and the UK media is agog at the heinous Rupert Murdoch scandal, millions of people are undergoing a starvation crisis in East Africa. The UN has upgraded the disaster—driven by high food prices, conflict, and prolonged drought linked by some to climate change—to famine in parts of Somalia today. Mark Bowden, UN humanitarian coordinator for Somalia, has said that tens of thousands Somalis have died from malnutrition recently, “the majority of whom were children.”

(06/30/2011) A prolonged drought in East Africa is bringing many of the region’s impoverished to their knees: the World Food Program (WFP) is warning that 10 million people in the region are facing severe shortages. While not dubbed a famine yet, experts say it could become one. Meanwhile, a recent study by FEWS NET/USGS has revealed that the current drought is the worst in 11 of 15 East African regions since 1950-51. Worsening droughts are one of the predictions for the region as the world grows warmer.