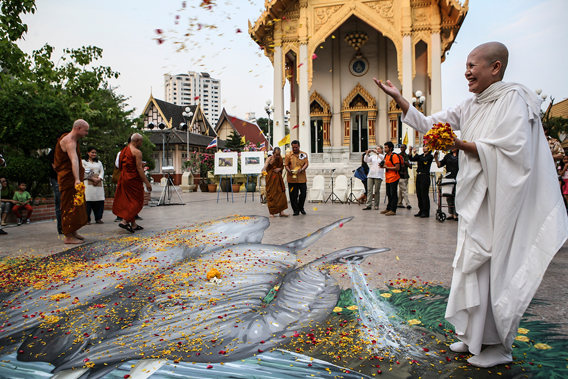 A monk at Wat That Thong temple in Bangkok During a Buddhist merit-making ceremony to pray for the tens of thousands of elephants poached annually. Photo by: © WWF Thailand.

Buddhist leaders prayed for slaughtered African elephants in Bangkok, Thailand last week, reports WWF. During a special merit-making ceremony, often reserved for the recently deceased, Buddhist monks, abbots, and leaders prayed for the tens-of-thousands of elephants that have been killed for their ivory tusks. Bangkok is currently hosting an international meeting of the Convention on International Trade in Endangered Species (CITES), where the elephant crisis is being discussed.

“Having prestigious leaders from the Buddhist community in Thailand lead this ceremony here, which is usually practiced for a family member who has passed away, emphasizes that we are all interdependent and part of one great web of life,” Phansiri Winichagoon, country director of WWF-Thailand, said.

Elephant poaching is decimating populations across Africa with experts warning that 25,000 elephants are being killed annually. No where is the slaughter worse than in the Congo Rainforest, home of the African forest elephant (Loxodonta cyclotis). New research estimates that 60 percent of the world’s forest elephants have been killed in the last ten year alone. Poachers, often connected to criminal syndicates, have also become more brazen. Some parks have seen whole elephant herds slaughtered, including babies.

Elephants are highly-intelligent and emotional animals, forming strong bonds with family members. In addition, elephants play a large ecological role in the environment, including dispersing many rainforest seeds.

The ceremony in Thailand was also meant as an educational opportunity for the nation’s many Buddhists: a recent investigative article by National Geographic argued that much of the demand for ivory is coming from Buddhists and Catholics seeking religious items carved out of the material. In fact, recently, a temple in Sri Lanka—the Sri Dalada Maligawa Buddhist Temple—has lobbied the government for a seized shipment of 359 elephant tusks. Buddhism as a religion, however, stresses that all is sacred. The first of the Buddha’s five precepts concerns abstaining from the taking of sentient life, which applies to all animals, including elephants. In addition, Buddhists practice ahimsa, which means to do no harm to any living creature.

The merit-making ceremony today also featured a massive chalk drawing of an African elephant by Dutch artist Remko Van Shaik, including a written message of, ‘Ivory belongs to elephants.’

Currently, Thailand is one of the few countries with a legalized domestic ivory trade, which is largely supported by foreign tourists buying ivory. However that may soon change: Prime Minister Yingluck Shinawatra pledged to end the ivory trade in Thailand.

Dekila Chungyalpa, director of the Sacred Earth program for WWF, says the merit-making ceremony is just one piece of evidence that people of faith are becoming increasingly concerned about conservation and environmental issues.

“Because faith leaders are speaking up about environmental sustainability being consistent with religious values, we are now seeing a new movement of faith-based conservation all over the world.”

A lifetime with elephants: an interview with Iain Douglas-Hamilton

(02/22/2013) Iain Douglas-Hamilton has dedicated his life to elephants. ‘I like elephants because of the way they treat each other,’ he says. ‘They’re very nice to each other most of the time, but not all the time … You see a lot of play…a lot of tender touching, caressing, tactile contact of one sort or another.’ The affection goes both ways. Douglas-Hamilton recalls one curious female who would always approach his vehicle. ‘Eventually I got so friendly with her that…I could walk with her and feed her the fruits of the wild gardenia tree. That was a very special elephant for me. She eventually brought her babies up to meet me.’ Douglas-Hamilton’s dedication extends to protecting the species from harm, and especially the ivory trade. He calls the current ivory trade “totally unsustainable” and recommends a total ban on the trade.