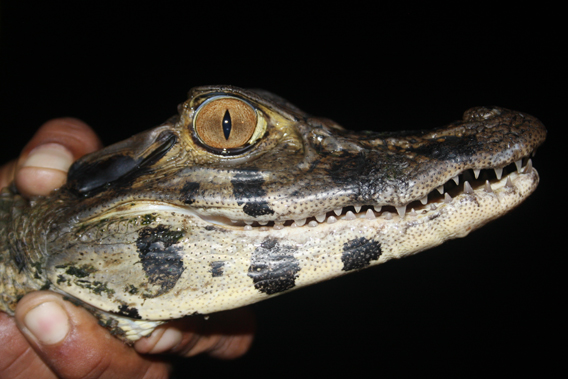 In the slow-moving freshwater of the Amazon River basin, a dark, scaly crocodilian known as the black caiman (Melanosuchus niger) is attempting a comeback from near extinction, but another crocodilian may threaten the recovery process, according to a new study in the journal Herpetologica.

The black caiman is the largest predator in the Amazon and is considered dependent on conservation efforts to survive by the IUCN Red List. The alligator relative once populated almost every Amazonian country, but their numbers have decreased an alarming 90 percent in the last century.

“Conservation efforts for the black caiman are important because the species is still recovering from a massive population reduction in the mid-1900s,” said Princeton University’s Teresa Laverty, lead author of the new study.

Nearly hunted to extinction, some countries like Brazil have given the species complete protection. These strict anti-hunting laws and protected habitats are helping the black caiman population recover, but the value placed on its hide by the leather industry make poachers a constant threat.

However, humans are only one challenge facing the black caiman.

The smaller spectacled caiman (Caiman crocodilus) occupies the same space and eats the same food as the black caiman, which could generate competition between the two species and perhaps delay the recovery of the black caiman.

The black caiman’s recovery looks hopeful in some areas, Laverty said. In other areas the adaptable spectacled caiman has moved into habitats left open by the decline of black caimans.

Although the amount of food in the stomach contents was different based on season, the study found that the two species have similar diets. The study also examined differences in diet of the species at different ages of development, and found that young black caimans feed on insects and crustaceans, whereas larger individuals feast on fish.

However, having similar diets is not proof of competition.

“Species that use similar resources might compete, but it is no way evidence for competition,” said John Maerz, an associate professor of vertebrate ecology at the University of Georgia, who was not involved in the study. Maerz’s research program supports the conservation and management of amphibians and reptiles by studying the impact of environmental changes on these creatures and the influence they have on ecosystem processes.

The study addresses dietary overlap and raises the question of potential competition between the two species given the similarity of their diets, Maerz continued, but further research is needed to demonstrate that one species is negatively affecting the other or that the spectacled caiman hinders black caiman recovery.

Laverty believes food competition could be one factor limiting the black caiman’s recovery, but agrees additional research needs to be done. “Further investigations should document spatial differences between the species to shed more light on the species’ interaction.”

It is possible that black caimans and spectacled caimans can live together; perhaps the smaller species will even become a food source for the larger black caiman. 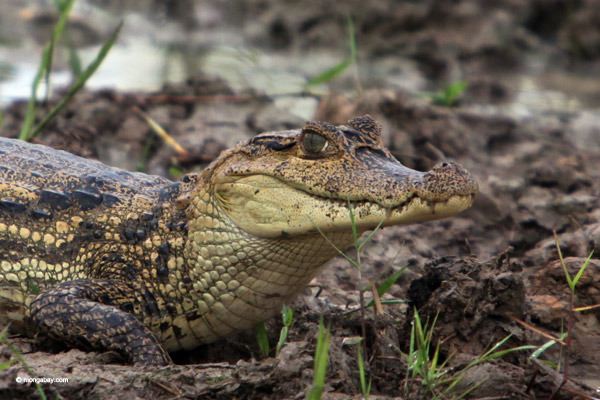 Spectacled caiman in Colombia. Photo by: Rhett A. Butler.

Pictures: 20% of the world’s reptiles endangered

(02/15/2013) Nearly a fifth the planet’s reptiles are threatened with extinction, warns a new assessment published in the journal Biological Conservation.

(01/16/2013) An international team of scientists have described a bizarre new species of worm-like lizard that lives underground. Strangely, they named it the ‘Moby Dick’ mermaid skink.

(01/15/2013) German and Russian biologists have discovered a stunning new species of lizard in Vietnam. The species, dubbed Calotes bachae, is described in a recent issue of the journal Zootaxa. Calotes bachae is a type of agama, a group of lizards commonly known as ‘forest dragons.’