BP fined $4.5 billion for Gulf of Mexico oil spill, but company may spend more buying its own stocks 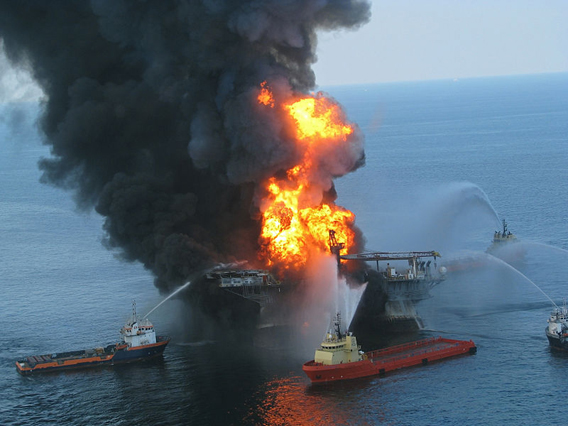 Last week the U.S. federal government fined BP $4.5 billion for the Deepwater Horizon disaster in 2010, which killed 11 workers and leaked nearly 5 million barrels of oil into the Gulf of Mexico. The oil giant also plead guilt to 12 felonies and two misdemeanors. However, even this fine—the largest in U.S. history—failed to dampen shareholder support of BP: stocks actually rose one percent following the announcement. Meanwhile, according to the Sunday Times, BP plans to spend $5.9 billion (over a billion more than the fine) buying back its own shares in order to boost stock prices.

The fine will be spread across various agencies and paid out over five years. The bulk of it, $2.4 billion, will go to the U.S. National Fish and Wildlife Foundation for restoration and conservation work in the Gulf of Mexico. Over one billion will be paid out to the Coast Guard’s Oil Spill Liability Trust Fund for future oil spill cleanup. The National Academy of Science is set to receive $350 million for oil spill prevention, education, research, and training. Finally, the company will also pay $525 million to the Securities and Exchange Commissions for misleading investors regarding the size of the spill.

Still, the historic fine is not being seen as a critical blow to BP. The company made $5.5 billion in the third quarter of this year alone, meaning it can pay off the total fine, which will be spread over five years, with just one quarter’s profit.

More fines, and bigger ones, may yet come. Oil spill fines under the clean water act could end up as large as $21 billion, although BP has only set aside $3 billion for this. In addition, more penalties could come from private civil claims and impacted states.

Another mishap kills Shell’s Arctic oil drilling for the year

(09/18/2012) Following global protests, a series of embarrassing mishaps, and a lengthy regulatory process, Dutch Royal Shell has announced it is abandoning its hugely controversial off-shore oil drilling in the Arctic—this year. The announcement came after the company damaged a containment dome meant to cap an oil spill. The incident was the latest in a series of delays and problems that oil the giant faced in its $4 billion plan to drill in the Chukchi and Beaufort Seas.

(09/10/2012) With the approval of the Obama Administration, Royal Dutch Shell began drilling into the ocean floor of the Chukchi Sea off the coast of Alaska yesterday morning. The controversial operation, which has been vehemently opposed by environmental and Native groups, will likely only last a few weeks this year until the Arctic winter sets in. The U.S. government has said that Shell must complete operations by September 24th, however the oil giant has asked for an extension.

(08/30/2012) In the same week that sea ice in the Arctic Ocean hit another record low due to climate change, the Obama Administration has given final approval to Royal Dutch Shell to prepare for exploratory drilling in the region. Vehemently opposed by environmentalists and indigenous groups, the drilling plans are a part of the Obama Administrations ‘all of the above’ energy policy. Whether or not Shell will actually drill a well this season, however, is still up in the air as its oil spill containment barge remains docked in Washington state for an upgrade that could last several days.

(04/24/2012) Two years after the BP-leased Deepwater Horizon drilling rig exploded in the Gulf of Mexico, killing eleven and causing an oil spill that lasted three months, scientists say the impacts on the Gulf ecosystem are only beginning to come to light and the discoveries aren’t pretty.