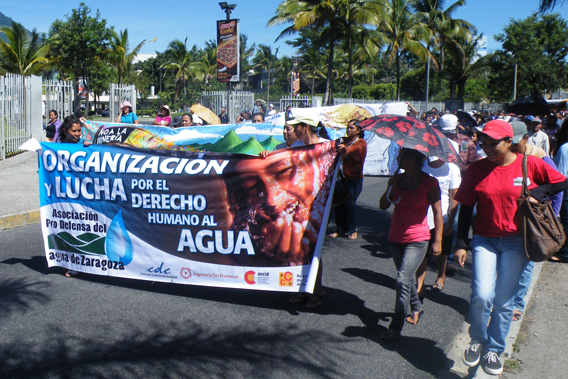 On hot days the broken stone and dried up silt from the San Sebastian mine in Eastern El Salvador bake in the sun. The slew of refuse is freckled with rock stained bright blue with cyanide, open to the elements that on rainier days will wash it downhill into the Rio San Sebastian below.

The openings of passages into the mine dot the mountainside, and further downhill a bright orange stream with a chemical stench flows into another. The American Commerce Group ceased operating here in 1999 but sought to return when the price of gold began its current escalation. After a Centre for Investigation of Investment and Commerce study found the local river to be 100,000 times more acidic than the area’s uncontaminated water, and cyanide levels to be ten times above safe levels, Commerce Group’s environmental permit was revoked. The company is subsequently suing the Salvadoran government for $100 million through the Central American Free Trade Agreement.

Rising concern over the environmental impact of mining led both presidential candidates in the 2009 elections in El Salvador to pledge to suspend mining operations, a promise kept by current president Mauricio Funes. To prevent further legal cases, which are already draining millions from the country’s coffers, the Salvadoran legislature is considering a special law suspending administrative procedures related to the exploration and exploitation of metallic mining concessions.

Salvadoran environmentalists, in turn, are urging their government to go beyond the suspension of mining projects, and instead ban metallic mining altogether. Thousands of demonstrators marched through the capital this month to urge parliament to sign a law that would enshrine a “human right to water,” which they said would make it impossible to grant mining permits.

In a presentation outside the Salvadoran Legislative Assembly last week, El Salvador’s Human Rights Ombudsman Oscar Umberto Luna gave his support to a complete ban. Luna said that El Salvador’s environmental, climatic, institutional, social and economic conditions meant that it would not be viable for the “metallic mining industry to pursue its extractive activities without risk to the health and living conditions of the Salvadoran People and the resources on which they rely.”

The Ombudsman further urged that “the different state institutions must prioritize the human rights of the population, and keep in mind that true development pursues the improved overall quality of living of the population, not just economic profit.”

A law against mining would transform the country’s legislative framework towards foreign investment. Canadian group Pacific Rim is demanding $77 million to recoup its investments at its El Dorado concession in the northern province of Cabañas, claiming that the government violated the country’s 1999 investment law by denying it a license to extract gold and silver. The investment law allows disputes between foreign investors and the state to be taken outside of the country and decided by the World Bank’s International Centre for the Settlement of Investment Disputes (ICSID).

“Cyanide is not a vitamin” 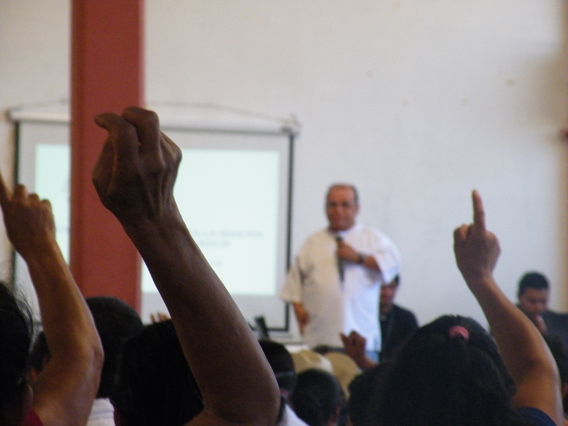 Angel Ibarra speaking at the meeting in Ilobasco, Cabanas. Photo by: Photo by: Robin Oisín Llewellyn.

Gatherings are being held around the country by anti-mining campaigners, raising awareness of the intertwined history of mining and water sources in the Central American gold belt. One meeting in the northern Salvadoran town of Ilobasco drew figures from a range of organizations united together in the National Roundtable against Mining.

Ilobasco is in the agricultural countryside of Cabañas province, and the number of straw Stetsons dotting the sea of heads made the question asked from the podium almost rhetorical: “What do most of you do for a living?”

The speaker—Karen Vasquez of El Salvador’s Water Forum—echoed them before arguing that the access to land and water for tenant farmers would be made more difficult if the country failed to pass the proposed General Law on Water.

The bill asserts that water is a “common good, finite, vulnerable, and essential for human life and ecosystems,” and prioritizes the human consumption of water over industrial uses. It has been sent by President Mauricio Funes to the Legislative Assembly for their approval, where it will be debated this month. The assembly is controlled by the President’s opponents, the right-wing ARENA party.

“Pacific Rim are talking about pursuing subterranean mining, so they’ll have to pump out the subterranean water and dehydrate the area, which would dry up the surface water and the wells,” he told the meeting in Ilobasco.

The proposed mine would, by its own projections, consume 3.2 million liters of water a year, and utilize cyanide to leach the gold from the rock.

“Cyanide is not a vitamin,” Ibarra says, responding to a member of the audience who told the podium that a chemist from the El Dorado mine visited their community to allay concerns over the compound. “Metallic mining causes cyanide and arsenic to be released into the area’s water, and causes acid mine drainage. There’s no such thing as green mining from a scientific or ecological perspective. It’s just propaganda.”

Acid mine drainage is caused by water generating acidity from the metal sulfides in disturbed rock formations. The sulphuric acid in turn releases toxic compounds and heavy metals, which are then washed into surface water.

Ibarra points to the long term health damage that these elements can cause when released into the area’s water sources.

“The most serious problems begin when the mining stops, after the 6-10 years that the mine would function for,” he explains. “It’s afterwards that the kidney failures and the chronic illnesses begin. There are examples from other countries where this pollution has gone on for hundreds of years; we need a definitive ban on mining.”

The chief executive of Pacific Rim is reported as saying that the tailings pond would be double-lined to prevent leakage, and use the INCO method to remove cyanide. The INCO method converts cyanide into cyanate using sulphur dioxide and air, but can leave a high level of sulphates and damaging compounds in the treated solution.

Independent hydrologist Robert Moran conducted a review of Pacific Rim’s environmental impact assessment (EIA) for the El Dorado mine, finding that there was a near total absence of baseline water quality and quantity data, a lack of transparency in the consultation process required by Salvadoran law, and a failure to consider the costs to the community of “free water use” by the company. He concluded that the EIA would not be acceptable in Canada or the United States.

Salvadorans from beyond the communities surrounding El Dorado and San Sebastian are aware of the vulnerability of their water sources to mining, with most drawing their drinking water from the Lempa River, which rises in Guatemala before flowing through Honduras. The Trifinio biosphere covers the border area between Guatemala, Honduras and El Salvador, and under Article 3 of the treaty governing the biosphere, the three states recognize that the area is of special interest to each other and promise not to pursue unilateral exploitation of Trifinio’s natural resources. However Guatemala has given permission for Canadian mining giant Goldcorp to press ahead with its Cerro Blanco mining project which, without the agreement of El Salvador, will discharge into the watercourse feeding the Lempa River.

Angel Ibarra raised the issue at the gathering.

“We need to have a Salvadoran law against metallic mining if we are to put pressure on Guatemala. How else can we complain?”

Such a law would run counter to the norm at a time when the escalating value of gold has seen a multiplication of mining concessions across Central America. But it would be building on a rising awareness about the vulnerability of El Salvador communities to water issues, which has already seen changes in national policy beyond the mining suspension.

“This is the first government to monitor water quality,” Karen Vasquez tells the audience, “55 rivers have been measured at 123 different points. We’re now pressuring local authorities to treat grey water and to ensure drinking water does not have E. coli in it, we’re not just working on the eradication of heavy metals.”

Vasquez then argued that a change in mentality was needed, which looked not just at treating dangerous water, but preventing water from becoming polluted in the first place.

The Ombudsman’s support for a complete mining ban, using the increasingly pervasive rights-based language to water and a healthy natural environment, indicate that opponents of metallic mining may be winning the argument on pollution. 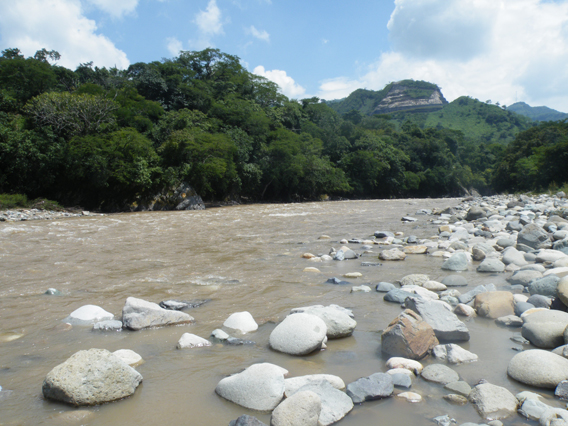 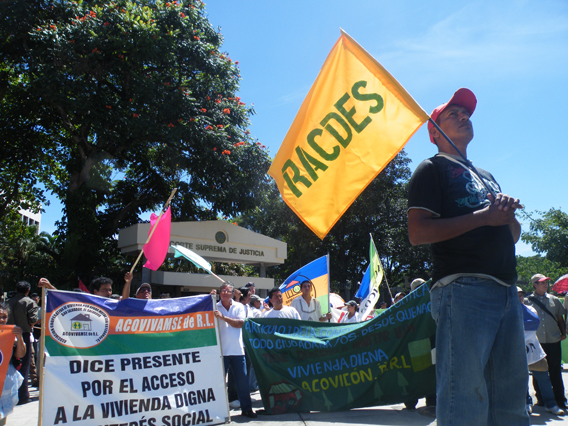 (08/09/2012) The Papua New Guinea government has granted a 20-year license for copper and gold mining around a mile (1.6 kilometers) below the ocean’s surface, jump-starting the world’s first commercial deep sea mining venture. Undertaken by Canadian company, Nautilus Minerals, the venture will mine deep sea hydrothermal vents off the coast of New Britain. However, the project faces stiff concern from local activists, fishermen, and environmentalists.

(08/01/2012) The Peruvian government is looking into making large-scale changes to its Environment Impact Assessments (EIA) after a review found significant problems with the vast majority of past reviews, reports the Inter Press Service. The news comes a few weeks after protests over a proposed gold and copper mine in the Andes left five people dead, including a 17-year-old boy.

(07/18/2012) Brazilian police have arrested 26 people and confiscated gold and aircraft in a coordinated effort to tackle illegal gold-mining in the Yanomami Indigenous Reserve, reports the BBC. Along with illegal miners the year-long investigation also arrested complicit airplane pilots, engineers, and business people in a bid to undercut the trade’s funders and infrastructure.