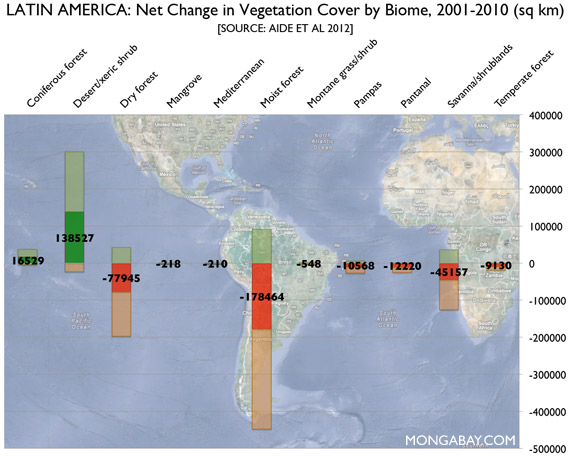 Change in vegetation cover by biome across Latin America, 2001-2010. Click image to enlarge.

Latin America lost nearly 260,000 square kilometers (100,000 square miles) of forest — an area larger than the state of Oregon — between 2001 and 2010, finds a new study [PDF] that is the first to assess both net forest loss and regrowth across the Caribbean, Central and South America.

The study, published in the journal Biotropica by researchers from the University of Puerto Rico and other institutions, analyzes change in vegetation cover across several biomes, including forests (dry, temperate, moist, mangroves and coniferous), grasslands (pampas, shrublands, montane grasslands, savanna, desert/xeric shrublands), and wetlands (pantanal). It finds that the bulk of vegetation change occurred in forest areas, mostly tropical rainforests and lesser-known dry forests. The largest gains in woody vegetation area occurred in desert vegetation and shrublands. 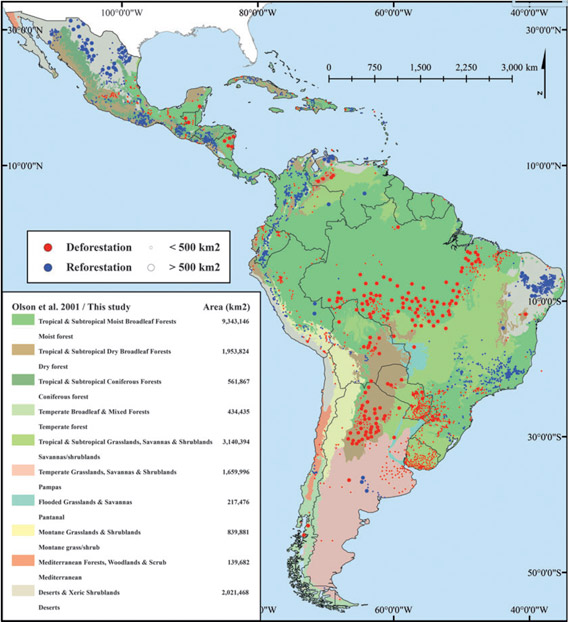 The distribution of hotspots of deforestation and reforestation relative to the ten major biomes in Latin America and the Caribbean as proposed by Olson et al. (2001). Included in the legend are the original biome names, the names used in AIDE ET AL 2012, and the area of each biome based on municipality boundaries, as calculated for AIDE ET AL 2012. Each dot represents one of the 2513 municipalities that had a significant change in woody vegetation over the 10-yr period (2001–2010). Image and caption courtesy of AIDE ET AL 2012. Click image to enlarge.

The study is based on assessment of NASA MODIS satellite data for some 16,000 municipalities across Latin America and the Caribbean. It excludes plantations and large-scale agricultural areas. 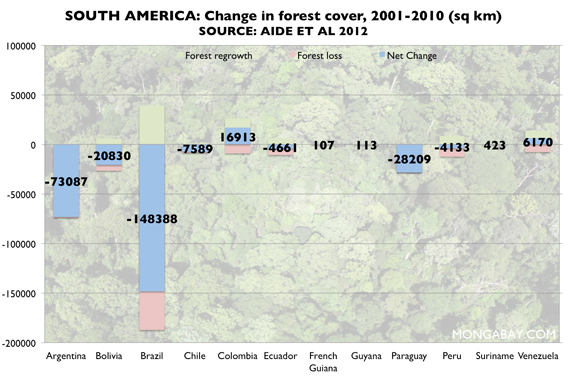 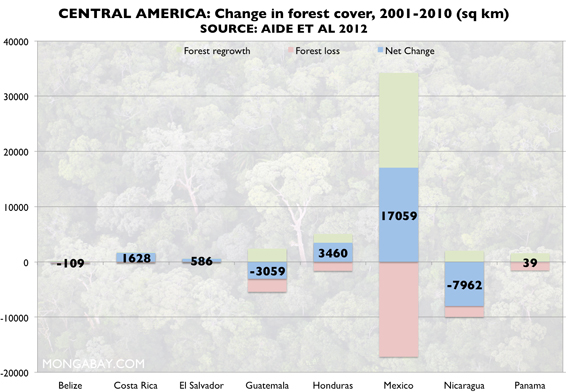 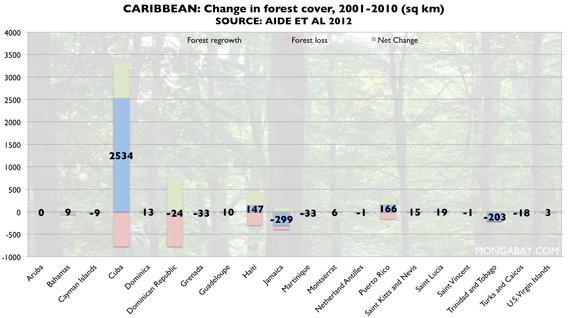 Change in forest cover by across Caribbean Island nations, 2001-2010. Click image to enlarge.

Overall the paper found that 80 percent of deforestation occurred in just four countries — Brazil, Argentina, Paraguay, and Bolivia — and was most closely associated with export-oriented agriculture.

“A key factor contributing to deforestation in South America is the increasing global demand for meat products, which has intensified land clearing for grazing and large-scale agriculture,” said lead author Mitchell Aide of the University of Puerto Rico. “Beef exports have increased dramatically, and there has also been a boom in soybean production. These soybeans are not for tofu or soy milk, but pig and poultry feed in China and Europe.”

The study found forest recovery in regions that are too dry or steep for industrial agriculture, a result that is consistent with other recently published papers suggesting rural abandonment in some marginal areas and the growing displacement of small-holder deforestation by industrial forest clearing.

Increases in vegetation cover were particularly significant in the desert/xeric shrublands biome in northern Mexico and northeast Brazil.

“Although more detailed analyses are needed to better understand these trends, we believe that these gains in woody vegetation were associated with a decrease in agricultural or grazing activities, and increases in regional rainfall during the last decade,” said co-author Matthew Clark of Sonoma State University.

Latin America has the largest extent of forest cover of any region in the world.

(07/29/2012) A study published last month in the journal Science came up with new estimates of tropical forest loss between 2000 and 2005. The research — led by Nancy Harris of Winrock International and also involving scientists from Applied GeoSolutions, NASA’s Jet Propulsion Laboratory and the University of Maryland — was based on analysis of remote sensing data calibrated with field studies.