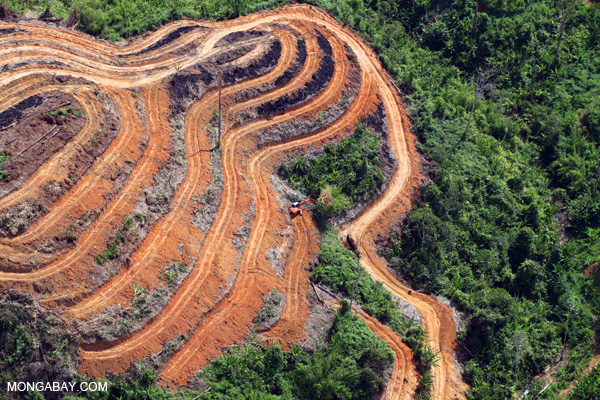 Deforestation of tropical forests for oil palm plantations in Sabah, Malaysia. Palm oil is one of over 15,000 commodities in a recent study that have been linked to biodiversity loss in developing countries connected to consumption abroad. Photo by: Rhett A. Butler.

Consumption in wealthy nations is imperiling biodiversity abroad, according to a new study in Nature that investigates the link between international trade and biodiversity decline. The study shows how threats to biodiversity and ecosystems, located primarily in developing countries, can be connected to consumer demand for goods in wealthier nations. Some of the major commodities include coffee, cocoa, soy, beef and palm oil.

Researchers linked 25,000 threatened species from the International Union for Conservation of Nature (IUCN)’s Red List to over 15,000 commodities responsible for biodiversity loss. The supply chains for these commodities were then traced from producing countries to consuming ones. By doing so, researchers calculated the biodiversity footprint for 187 countries around the world. For example, countries such as Japan, Germany, France, and the UK, which cause relatively little direct habitat destruction to threatened species in their own countries, still contribute heavily to biodiversity loss by consuming implicated commodities from abroad.

“Developed countries tend to be relatively minor net exporters, but major net importers of implicated commodities,” the scientists write. The U.S., in fact, is the top importer of biodiversity-threatening goods. The scientists add that “in stark contrast, developing countries find themselves degrading habitat and threatening biodiversity for the sake of producing exports.”

Six of the top ten global net exporting countries are located in Southeast Asia. Indonesia is the top net exporter, with the major crops of rubber, coffee, cocoa and palm oil imperiling 294 species.

Scientist’s recommendations for curbing the negative impact of international trade on biodiversity include targeting both the production and consumption end of global supply chains.

“Policy aimed at reducing local threats to species should be designed from a global perspective, taking into account not just the local producers who directly degrade and destroy habitat but also the consumers who benefit from the degradation and destruction,” the authors argue.

Specific suggestions include environmental labeling on products and expanding the global ban on international trade in endangered species to include products linked to biodiversity loss.

However, these strategies should also take into consideration the economic development of poorer countries, according to a Correspondence in a follow-up issue of Nature by Marco Sakai. While reducing consumption of biodiversity-injuring goods in wealthy countries is important, Sakai argues that poorer countries may require assistance in making the transition to more sustainable production while also improving the quality of life for their citizens. Soy fields in the Amazon rainforest. Photo by: Rhett A. Butler.

Jacob Munger is a researcher at the Center for Sustainability and the Global Environment (SAGE) at the University of Wisconsin-Madison.

(05/30/2012) A new campaign is targeting IKEA, the world’s biggest furniture retailer, for logging old-growth forests in the Karelia region of Russia. An alliance of groups, headed by the Swedish NGO Protect the Forest, allege that IKEA’s subsidiary, Swedwood, is clearcutting thousands of hectares of old and biodiverse forests. But, Swedwood’s 300,000 hectare concession is certified by the Forest Stewardship Council (FSC), generally considered the world’s strongest forestry certifier.

Massive economic growth does little for happiness in China

(05/29/2012) Economic growth alone may not raise happiness, according to a recent study in the Proceedings of the National Academy Science (PNAS). Despite a stunning economic growth rate of around 10 percent per year over the last two decades, China’s people have not seem a big boost in their overall life satisfaction.

(02/07/2012) More companies are reporting on the impact of their operations on global forests, finds a new report. Eighty-seven global corporations disclosed their “forest footprint” in 2011, according to the third Forest Footprint Disclosure (FFD), which asks companies to report on their impact on forests based on their use of five commodities: soy, palm oil, timber and pulp, cattle, and biofuels. This is a 11 percent rise from the companies that reported in 2010, including the first reports by companies such as the Walt Disney Company, Tesco UK, and Johnson & Johnson. However a number of so-called “green” companies continue to refuse to disclose, including Patagonia, Stonyfield Farms, and Whole Foods Markets Inc.

(10/23/2011) An independent panel in the Netherlands has found that the Malaysian Timber Certification Scheme (MTCS) falls short of Dutch standards for sustainable forestry. The final decision comes after a series of judgements and appeals with the latest panel concluding that MTCS still allows natural forest to be destroyed for monoculture plantation and that the scheme ignores the rights of indigenous people.