Smartphones promoted as a tool for indigenous forest protection 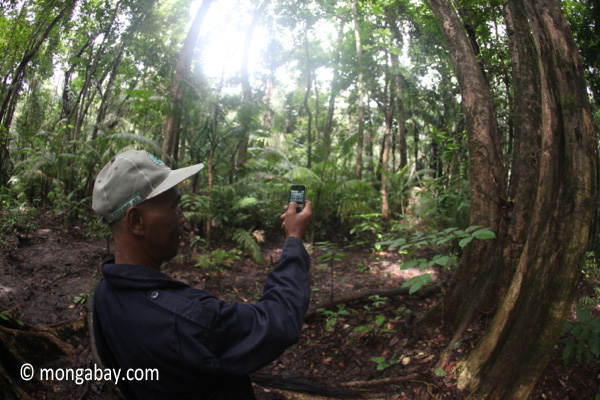 Ranger using a camera phone on patrol in Java. Photo by: Rhett A. Butler.

Smartphones beeping in the woods may be a welcome presence that augurs the increased ability of indigenous communities to be stewards of their own biodiverse forests. Representatives of these communities and their supporters have advocated that international conservation policies like Reduced Emissions through Deforestation and Degradation (REDD) be increasingly managed by the communities themselves. A new strategy in this effort is to train local residents to use smart phone ‘apps’ to collect geographic data and photographs, allowing them to monitor the health of forests essential to their livelihoods, according to a report by the Global Canopy Program. Local data can then be incorporated into national databases so they become linked with remote sensing data. The Global Canopy Program argues that the technique will create a more collaborative and transparent monitoring system while bolstering community forest management practices.

Although community forest management projects have been gaining increasing support among researchers and policy makers, a new study led by Diana Bowler at Bangor University has questioned their effectiveness in halting deforestation, maintaining biodiversity, and bettering livelihoods. Bowler and her colleagues systematically reviewed previous research evaluating community forest management programs and conclude that the evidence is inconclusive. They warn that their results “should be of concern to organizations planning to invest substantial financial resources in CFM [community forest management].” The authors do not assert that these programs can’t work, but insist more evidence is needed to evaluate which strategies are effective and which are not. To establish more evidence, they suggest “rigorous plans for monitoring of outcomes be built into their design.”

Mandar Trivedi, Head of Science at the Global Canopy Program, sees this call for rigorous monitoring as an exciting challenge. He believes that indigenous people trained with smartphones can meet the challenge, and thereby contribute to the underlying goals of effective local management. He cites recent research by the Monitoring Matters Project that found “with a bit of training, the community monitors were as good as, if not better than, external ‘experts.'” Various local management projects are underway throughout the tropics, including in Brazil, Guyana, and Cameroon. One of these, directed by the Coordinator of Indigenous Organizations of the Amazon Basin (COICA), is focused on training indigenous residents to not only use smartphones to monitor the forests, but to train others in the community as well.

These efforts are seen by Trivedi as a way of empowering indigenous people to utilize their “local knowledge” in forest management. However, the use of sophisticated technology such as Android smartphones—developed by multinational corporations, programmed by Global North software developers, and disseminated either though NGOs or governmental agencies—raises significant questions about different knowledge systems and the integration of “local knowledge” with more universalized scientific information. Whose knowledge shapes the process? Will indigenous people simply be collecting data or will they influence the design of the data collection? Regardless of the answers, the use of smartphone monitoring technology by indigenous people will likely have considerable impact on both the effectiveness of community forest management and the debates that surround it.

Andrew Davey is a PhD student in Geography at the University of Wisconsin-Madison studying how politics, history, and ideas about nature and the good life animate the local and sustainable food movement in the US.

(05/08/2012) Conservation NGO Wildlife Alliance has launched a new iPhone app that not only teaches users about Cambodian wildlife but also gives them information on how to help the group fight pervasive wildlife crime in the country. The app includes photos and information regarding species imperiled by the wildlife trade as well as informational videos with Jeff Corwin from the Animal Planet.