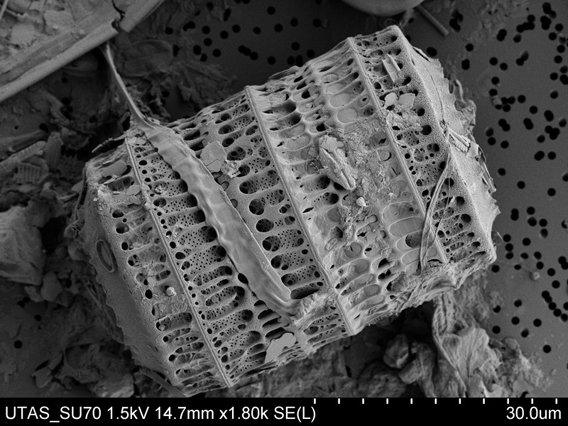 Diatom, a type of phytoplankton, as seen by a scanning electron microscope. Photo by: University of Tasmania Scanning Electron Microscope.

For a long time, oceanic iron fertilization was seen as a promising mechanism to combat global climate change. But then in 2009 a well-publicized study found that iron fertilization stored 80 times less carbon than expected, dampening enthusiasm and support around the geoengineering scheme. Now, however, the idea of fertilizing the ocean with iron may be back: a new study in Nature reports that iron fertilization, in the right conditions, could store carbon in the deep ocean for centuries.

Iron fertilization uses the natural ability of marine phytoplankton to store carbon. Researchers dump iron sulphate in parts of the ocean where it is scarce, creating an algal bloom. Days later, when the bloom’s phytoplankton die, they sink to the oceanic floor and, hopefully, take their carbon with them.

“We were able to prove that over 50 percent of the plankton bloom sank below 1000 meter depth indicating that their carbon content can be stored in the deep ocean and in the underlying seafloor sediments for time scales of well over a century”, says co-author Victor Smetacek with the Alfred Wegener Institute for Polar and Marine Research in the Helmholtz Association.

The researchers attribute the successful results of their study on their marine site, an eddy in the Southern Ocean with significant dissolved silicon, allowing different types of phytoplankton—mostly diatoms—to dominate the bloom.

“This shows how differently communities of organisms can react to the addition of iron in the ocean”, explains co-author Christine Klaas, also with the Alfred Wegener Intistitute.

The scientists note that while their study is promising, much more research is needed to understand how iron fertilization make lock away carbon. Twelves past trials have been attempted with iron fertilization by scientists, but this is the first one to show that a significant portion of the carbon sequestered by the phytoplankton falls with them to the ocean floor, theoretically storing it away.

Critics of iron fertilization, however, fear that the scheme could have untold impacts on marine ecosystems.

Iron fertilization is one of the more well-known and older ‘geoengineering’ schemes to help mitigate or combat climate change by large-scale manipulation of the global environment. However, even proponents of iron fertilization do not see it as a silver bullet. Conducted on a massive scale, the practice would still only sequester a fraction of global annual carbon emissions.

But Smetacek told the Guardian that the geoengineering label shouldn’t scare people away from looking deeper into iron fertilization as one tool among many to combat climate change.

“The time has come to differentiate: some geoengineering techniques are more dangerous than others. Doing nothing is probably the worst option,” he said adding that iron fertilization, in conjunction with other measures, could keep the global climate from a “tipping point.”

While geo-engineering has attracted a lot of attention and controversy in recent years, the vast majority of experts and scientists say the best way to combat global climate change is simply to cut global greenhouse gas emissions produced by burning fossil fuels, deforestation, industrial agriculture, and other human actions.

(12/14/2010) Underground storage of carbon dioxide may trigger earthquakes which could allow the gas to seep back into the atmosphere, rendering the emissions mitigation approach ineffective, warns Stanford geophysicist Mark Zoback.

(10/31/2010) Efforts to explore geoengineering, whereby governments would employ large-scale projects to alter the world’s climate in a bid to combat climate change, received mixed messages this week. In Nagoya, Japan—where all but three of the world’s nations (the US, Andorra, and the Holy See) met at the Convention on Biological Diversity (CBD) to hammer out an agreement on stemming biodiversity loss—member nations agreed on Friday to a moratorium on geoengineering schemes. On the same day a US congressional report on geoengineering, which it termed climate engineering, recommended “research now to better understand which technologies or methods, if any, represent viable stopgap strategies for managing our changing climate.”

Scientists call for research on geoengineering scheme to block sunlight

(01/27/2010) The idea goes something like this: nations would send megatons of light-scattering aerosol particles into the globe’s upper atmosphere, significantly reducing sunlight reaching the earth and thereby immediately cooling the Earth. While the idea may sound like science-fiction—or desperate, depending on your opinion—researchers writing in Science say that it may be one of the best ways to lower the Earth’s temperature. They argue that international research and field testing of the idea, known as solar-radiation management (SRM), should begin immediately.