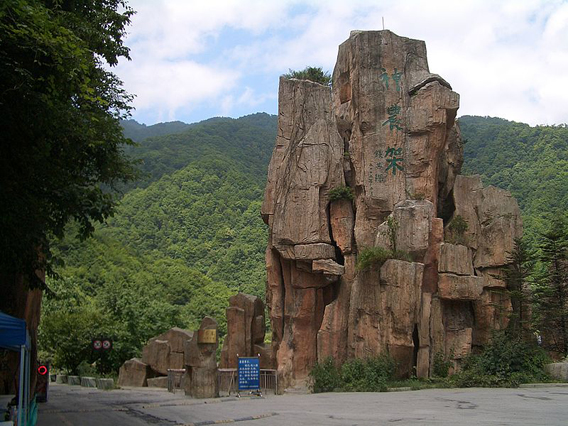 The entrance to Shennongjia Nature Reserve.

This month, nearly 40 scientists will enter a wild and remote region of western China, reports China’s state media Xinhua. Spending several weeks in Shennongjia Nature Reserve, the researchers hope to study rare species like the golden snub-nosed monkey (Rhinopithecus roxellana), which is listed as Endangered by the IUCN Red List. But the forest is also the source of China’s ‘wild man’ sightings; known locally as the ‘Yeren,’ the unconfirmed primate has also been dubbed China’s Bigfoot.

The Shennongjia Nature Reserve, a UNESCO World Biosphere Reserve, is home to 3,700 plants and over 1,000 animals, including leopards (Panthera paradus), the Asian golden cat (Pardofelis temminckii), the golden pheasant (Chrysolophus pictus), and the Chinese giant salamander (Megalobatrachus davidianus), which is considered Critically Endangered as well as being listed as number two by the EDGE program in a catalog of the world’s 100 most endangered and evolutionary unique amphibians.

According to Xinhua, over 400 people have also reported seeing the Yeren, or Chinese wild man, in these rugged montane forests. However, much like the Yeti of the Himalayas and the Sasquatch of North America, the species has never been confirmed by scientists and remains in the realm of legend and cryptozoology.

Massive economic growth does little for happiness in China

(05/29/2012) Economic growth alone may not raise happiness, according to a recent study in the Proceedings of the National Academy Science (PNAS). Despite a stunning economic growth rate of around 10 percent per year over the last two decades, China’s people have not seem a big boost in their overall life satisfaction.

(05/21/2012) Founded in 1951, The Nature Conservancy (TNC) works in more than 30 countries and
has projects in all 50 of the United States. The Conservancy has over one million
members, and has protected more than 119 million acres of wild-lands and 5,000 miles
of rivers worldwide. TNC has taken an active interest in China, the world’s most
populated nation, and in many important ways, a critical center of global development.
The following is an interview with multiple directors of The Nature Conservancy’s China
Program.

(05/16/2012) Scientists in China have located a second population of the Myanmar snub-nosed monkey (Rhinopithecus strykeri), a primate that was only first discovered two years ago in Myanmar, also known as Burma. Long Yongcheng, scientist with the Nature Conservancy in China, told the China Daily that his team have discovered 50-100 Myanmar snub-nosed monkeys in the Gaoligong Mountain Natural Reserve near the border with Myanmar in Yunnan Province.