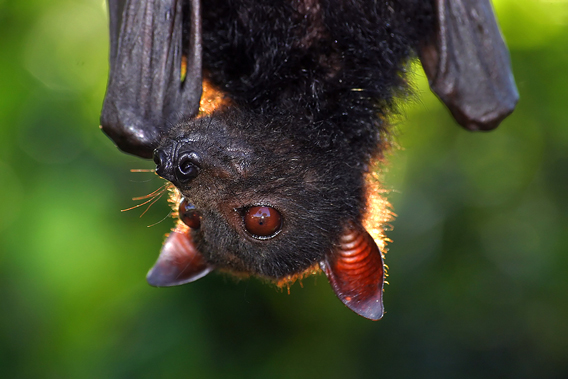 Bushmeat hunting is well-known to be decimating animal populations in Africa, but has been little studied much of Southeast Asia. However, a new paper in mongabay.com’s open access journal Tropical Conservation Science shines light on the size and scale of bushmeat poaching in the Philippines. Studying an anonymous community near a national park on the island of Luzon, researchers found that poachers targeted 22 species, ten of which are considered either threatened or near threatened with extinction by the IUCN Red List. The most heavily hunted animals were fruit bats including the giant flying fox (Pteropus vampyrus) and the white-winged flying fox (Desmalopex leucopterus).

“According to hunters, bats represent a steady supply of bushmeat, as success in hunting large animals such as wild pig, is considered unreliable and sporadic. Several reports suggest that the flying fox populations are rapidly declining throughout Southeast Asia, largely due to overhunting,” the scientists write, adding that “flying foxes contribute to forest regeneration by promoting seed dispersal, reductions in their populations could potentially alter local plant communities and ecosystem functioning. This also holds true for other seed dispersers such as palm civets, macaques, fruit-doves, and hornbills, all of which are also hunted.”

For its part, the white-winged flying fox is considered Endangered and is only found in the Philippines.

By interviewing anonymous poachers over six months, the scientists found that poaching is prevalent in many parts of the park. Lack of enforcement means even local officials admit to hunting bats. But the poachers also told scientists that parts of the park are not hunted due to their remoteness.

“We believe that increased education about threatened species could encourage hunters to focus on less-threatened species. In the end, fines may serve as the best method to limit hunting in the protected area,” the scientists say. They add that current poaching is not for subsistence, but largely economic gain.

“As in many other developing countries, money is a major driver of the bushmeat trade in our study area. Thus, improvement of local economic conditions would likely substantially decrease hunting frequency, as was observed in nearby Indonesia,” the authors write.

(04/23/2012) Scientists have discovered four new species of brilliantly-colored freshwater crabs on the Philippine island of Palawan. Described in the Raffles Bulletin of Zoology, the new species expands the genus, Insulamon, from one known crab species to five. Although its ecosystems are threatened by widespread mining and deforestation, the Philippines is a mega-diverse country, meaning that it belongs to a select group of 17 countries that contain the bulk of the world’s species.