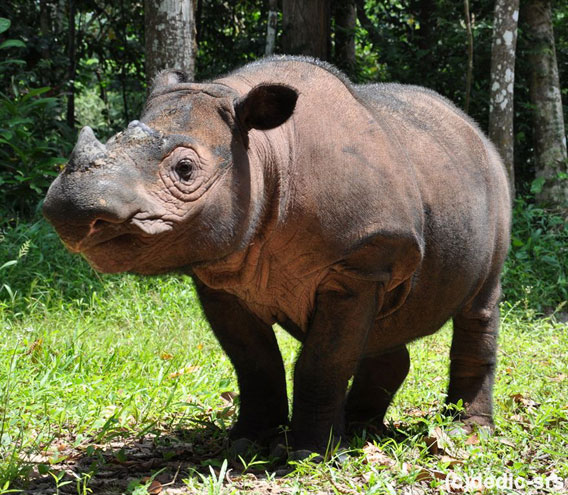 Ratu (above) and the baby male are doing well. Photo by: International Rhino Foundation.

After two miscarriages and a pregnancy that lasted 15 months, Ratu, a female Sumatra rhino, has given birth to a healthy male calf, conservationists happily announced this weekend. The birth at a rhino sanctuary in Way Kambas National Park in Sumatra is the culmination of years of hard work, dedication, and the best reproductive rhino science in the world. This is the first captive birth in Indonesia, and only the fourth captive birth for the Sumatran rhino (Dicerorhinus sumatrensis) in the last hundred years. The successful birth brings new hope for one of the world’s rarest mammals: less than 200 Sumatra rhinos are thought to survive in the world.

“Ratu gave birth a male baby at 12:45 a.m. on Saturday. Both the mother and the baby are all very well,” Widodo Ramono, who works at a sanctuary, told the AFP.

The birth is also historic for bringing together two rhinos from different worlds: wild rhino, Ratu, bred with a captive-born male named Andalas, who grew up in U.S. zoos. Born at the Cincinnati Zoo in 2001, Andalas was the first Sumatran rhino to be born in captivity in 112 years. In 2007 Andalas was flown all the way from the U.S. to his ancestral home, Sumatra, in hopes that he would breed with one of the rhino sanctuary’s three females.

“Thank God, we are very grateful that all the delivery process went smoothly and naturally,” Indonesia Forestry Ministry’s spokesman Masyhud told the AFP. “It’s really a big present for the Sumatran rhino breeding efforts as we know that this is a very rare species which have some difficulties in their reproduction.”

Sumatran rhinos survive in three distinct populations: one on the island of Sumatra, another in the Bornean state of Sabah, and possibly a few individuals in Peninsular Malaysia. After decades of vast deforestation, fragmentation, and poaching the species’ biggest threat today is a dwindling population and fertility problems.

“There are too few [Sumatran rhinos] left to survive without bold human intervention,” Dr. John Payne of Borneo Rhino Alliance (BORA) told mongabay.com this year. “The days of leaving Sumatran rhinos in natural habitats and guarding them, hoping that they will not be poached and will breed, are passed. Very few of the remaining rhinos are likely to be fertile. Some of the fertile ones will have no access to a rhino of the opposite sex, because there are almost no rhinos left. Even if these rhinos are not poached, I would guess that maybe 90 percent of the survivors will not breed.”

The 250-acre rhino sanctuary at Way Kambas is a new attempt to breed these vanishing rhinos in a semi-captive state. Here, they are able to roam large enclosures of their native habitat, but at the same time are kept under close watch by guards and veterinarians.

A similar sanctuary has been proposed for the Sumatran rhinos in Borneo, which likely number less than 40. Already, two rhinos—Tam (a male) and Puntung (a female)—are in semi-captive pens in Tabin Wildlife Reserve, but conservationists are waiting for a promised full sanctuary.

Sumatran rhinos are the world’s smallest and hairiest rhino species. Some scientists believe that the Sumatran rhino is most closely related to the extinct woolly rhinoceros, due to its thick covering of hair.

The rhino family is one of the world’s most endangered big mammal families. In addition to the Sumatran rhino, two other rhino species are currently categorized as Critically Endangered by the IUCN Red List: the black (Diceros bicornis) and the Javan (Rhinoceros sondaicus). Last year also marked the announcements of the extinction of two rhino subspecies: the Vietnamese rhino (Rhinoceros sondaicus annamiticus), a subspecies of the Javan, and the western black rhino (Diceros bicornis longipes), a subspecies of the black.

Worldwide, rhinos are being targeted by poachers for their horns which are ground up for Traditional Chinese medicine. However, several scientific studies have shown that the horns have no medicinal value whatsoever. 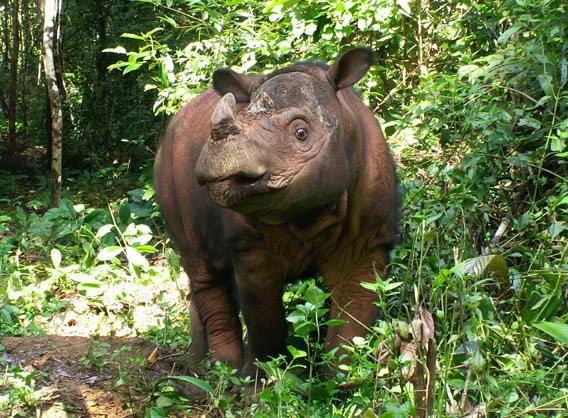 (06/04/2012) Trekking through deep mud and sawgrass we find a stinking wallow. The elite rangers, dressed completely in black despite the tropical heat, mark the site with the GPS unit, measure the mucky puddle’s depth, and move on. This is the first sign of one of the planet’s rarest animals—the Javan rhino. Only 35 or so remain, including none in captivity. This patch of rainforest and swamp in Ujung Kulon National Park—on the very tip of West Java—is their last and only refuge.

(05/01/2012) Nearly all the world’s remaining Javan rhino have been documented on video via camera traps in Indonesia’s Ujung Kulon National Park, according to a montage put together by park authorities.

How a crippled rhino may save a species

(04/09/2012) On December 18th, 2011, a female Sumatran rhino took a sudden plunge. Falling into a manmade pit trap, the rhino may have feared momentarily that her end had come, but vegetation cushioned her fall and the men that found her were keen on saving her, not killing her. Little did she know that conservationists had monitored her since 2006, and for her trappers this moment had been the culmination of years of planning and hope. A few days later she was being airlifted by helicopter to a new home. Puntung, as she has become called, was about to enter a new chapter in her life, one that hopefully will bring about a happy ending for her species.

(02/07/2012) Ratu, a female Sumatra rhino (Dicerorhinus sumatrensis), is in the eleventh month of her third pregnancy raising hopes for a successful birth of one of the world’s most imperiled big mammals. Ratu suffered two prior miscarriages, but researchers believe the current pregnancy—which still has four to five months to go (for a total term of around 15-16 months)—could produce what Indonesian officials have long hoped for: a bundle of joy at the Sumatran Rhino Sanctuary in Sumatra. With only around 200 Sumatran rhinos surviving today in Indonesia and Bornean Malaysia, many conservationists see such breeding efforts as the last and best chance to save the Critically Endangered species from extinction.