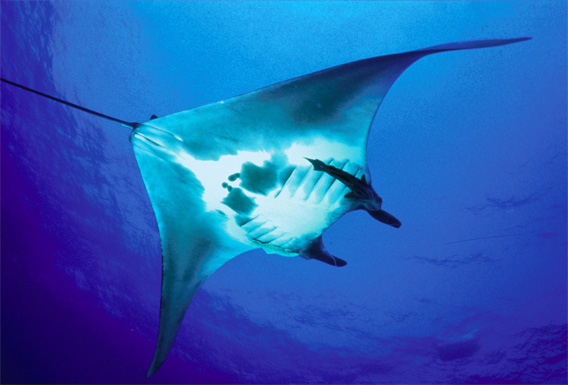 Researchers from the Wildlife Conservation Society, the University of Exeter, and the Government of Mexico have published the first-ever satellite telemetry study on the manta ray, the world’s largest ray species. The findings will help inform ecosystem-based management plans for the rays, which are in decline worldwide due to fishing and accidental capture. Photo credit: Kaile Tsapis.

Satellite tracking technology has revealed new insights into the behavior of manta rays, reports the Wildlife Conservation Society (WCS). The findings are published in this week’s issue of the journal PLoS.

Scientists from WCS, the University of Exeter (UK), and the Government of Mexico used satellite telemetry to track six giant rays for 13 days off the coast Mexico’s Yucatan Peninsula. They learned that manta rays, which can grow up to 25 feet in width, cover vast distances as they search for their primary sources of food.

“The satellite tag data revealed that some of the rays traveled more than 1,100 kilometers during the study period,” said Dr. Matthew Witt of the University of Exeter’s Environment and Sustainability Institute. “The rays spent most of their time traversing coastal areas plentiful in zooplankton and fish eggs from spawning events.”

The researchers say the study will help inform efforts to conserve the manta ray, which is listed as “vulnerable” on the International Union for Conservation of Nature’s (IUCN) Red List. Rays are targeted by fishermen for the Traditional Chinese Medicine market and caught accidentally.

“Almost nothing is known about the movements and ecological needs of the manta ray, one of the ocean’s largest and least-known species,” said Rachel Graham, lead author on the study and director of WCS’s Gulf and Caribbean Sharks and Rays Program, in a statement. “Our real-time data illuminate the previously unseen world of this mythic fish and will help to shape management and conservation strategies for this species.”

“Studies such as this one are critical in developing effective management of manta rays, which appear to be declining worldwide,” added Dr. Howard Rosenbaum, Director of WCS’s Ocean Giant Program.

The manta has the highest brain to body ratio of all sharks and rays, according to WCS. The species gives birth to only one or two young each year, leaving them at risk from overexploitation.

(02/05/2009) Google Earth now allows users to dive beneath the surface of the world’s oceans to see coral reefs, trenches, and other marine wonders. The new version, Google Earth 5, includes layers showing locations of shipwrecks and surf spots; routes for ocean expeditions; the movements of GPS-tracked sea animals; and information (including videos and images) about the ocean environment from sources including National Geographic, the Cousteau Society, the International Union for Conservation of Nature (IUCN), the Monterey Bay Aquarium, and the National Oceanic and Atmospheric Administration (NOAA).