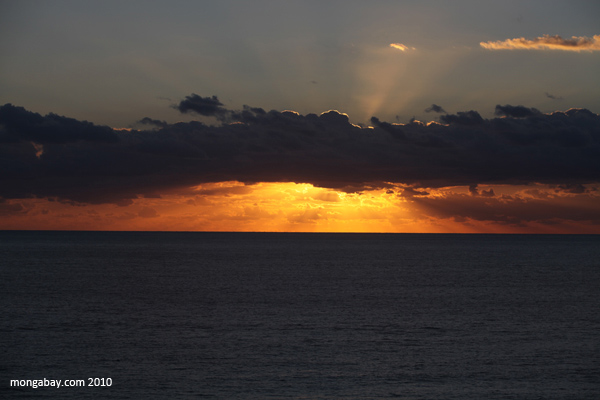 Sunrise in Cancun, Mexico, where the 2010 UN Climate Summit was held. Photo by: Rhett A. Butler.

Last week, Mexico’s Senate passed an aggressive and comprehensive climate change bill, making it the first developing nation and only the second country to do so, after the UK. The bill, which far outshines anything achieved by its far wealthier northern neighbors, sets ambitious targets for cutting emissions while creating new incentive programs for clean energy. Largely dependent on fossil fuels, Mexico is approximately the 11th highest greenhouse gas emitter in the world.

“Mexico is aware this is the end of the oil era, so we need to implement this fiscal reform—and if we go through it, we’ll be able to do without this oil,” Porfirio Munoz Ledo, a Mexican politician, told the BBC.

The new law, which passed the Senate unanimously, pledges to cut greenhouse gas emissions by 30 percent from business as usual by 2020 and slash emissions in half by 2050 from 2000 levels. In addition, the country has set a goal of having 35 percent of its energy come from clean sources by 2024. Big polluters will now be required to track and report emissions, and fossil fuel subsidies are on their way out.

To oversee the law, the country is establishing a top-level Climate Change Commission.

The key now, according to experts, is for Mexico’s government to fully implement and utilize the new law.

“This law’s true significance hinges on the extent to which the government uses its discretionary authority to fully implement and strengthen the law’s provisions. Done right, Mexico can both produce a powerful tool to fight climate change and maximize the law’s economic opportunities for the Mexican people and industry,” Jennifer Haverkamp, International Climate Program Director at Environmental Defense Fund (EDF), said. “For the bill to have passed with broad support from all parties in both chambers of Congress augers well for the future.”