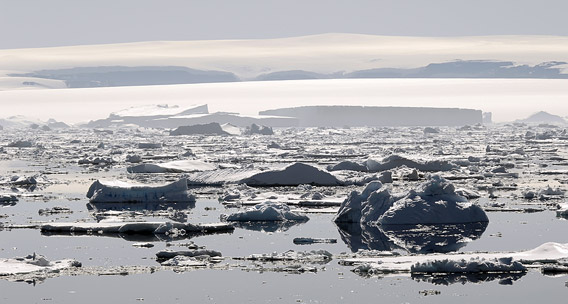 Antarctica: Ross Island in the Ross Sea. Photo by: Bigstock.

The Ross Sea, a massive bay off Antarctica, has been dubbed the world’s last ocean due to its pristine state, long-untouched by industry and fisheries. However, over the last 15 years New Zealand commercial fisheries have entered the sea, seeking the slow-growing Antarctic toothfish which is usually sold as the high-end Chilean sea bass. Now as conservation groups plead for nations to grant the Ross Sea protected status, Greenpeace has begun a campaign to get good retailers to steer clear of stocking Antarctic toothfish. To date, Safeway, Wegmans, and Harris Teeter has all pledged not to source from the Ross Sea.

“The delicate balance of the fragile Ross Sea is under threat from commercial fishing,” Karli Thomas with Greenpeace says in a press release. “Although technology has made it possible, it is simply not sustainable to be fishing every last corner of our ocean. The Ross Sea is a special place that we should be protecting as the home to diverse and unique wildlife, and a refuge in the face of climate change—not exploiting to feed the wealthy.”

Meanwhile a coalition of 16 environmental groups, dubbed the Antarctic Ocean Alliance (AOA), released a report calling for full protection of 3.6 million square kilometers of the Ross Sea, as well as the creation of the 18 more reserves in the Southern Ocean surrounding Antarctica.

“The fate of the Antarctic’s Ross Sea is likely to be decided by 24 countries and the EU this year and the global public knows nothing about it,” said AOA campaign Director Steve Campbell referring to the Commission for the Conservation of Antarctic Marine Living Resources (CCAMLR), which is responsible for managing the Southern Ocean around Antarctica. “Now is the time to protect this amazing environment but we’ll need the global public involved to make that happen.”

CCAMLR will be discussing proposals in October. AOA has set up a website where the public can make their views known. The proposed plan from the Antarctic Ocean Alliance is the most ambitious to date

(01/05/2011) In November of 2010, the Antarctic toothfish fishery was deemed sustainable by the Marine Stewardship Council. This certification goes against the advice of many marine scientists who claim that insufficient research has been done to determine the full impact of commercial fishing on this enigmatic species.

(01/03/2012) Scientists have discovered a deep sea ecosystem dominated by hairy pale crabs off of Antarctica. The new species of “Yeti crabs” survive alongside many other likely new species, including a seven-armed meat-eating starfish, off of hydrothermal vents, which spew heat and chemicals into the lightless, frigid waters. According to the paper published in PLoS ONE, this is the first discovery of a hydrothermal vent ecosystem in the Southern Ocean though many others have been recorded in warmer waters worldwide.