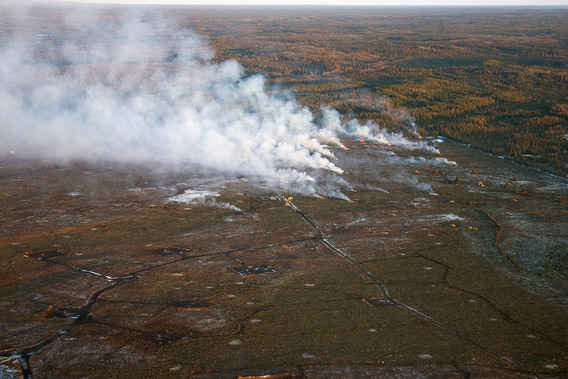 Oil sands construction: land clearing in preparation of the construction of an oil sands project in northern Alberta. Photo by: Bigstock.

Environmentalists have targeted the oil-producing tar sands in Canada in part because its crude comes with heftier carbon emissions than conventional sources. Now, a new study in the Proceedings of the National Academy of Sciences (PNAS) has found an additional source of carbon that has been unaccounted for: peatlands. Mining the oil in the tar sands, dubbed “oil sands” by the industry, will require the wholesale destruction of nearly 30,000 hectares of peatlands, emitting between 11.4 and 47.3 million metric tons of additional carbon.

“Claims by industry that they will ‘return the land we use—including reclaiming tailings ponds—to a sustainable landsca
that is equal to or better than how we found it’ and that it ‘will be replanted with the same trees and plants and formed
into habitat for the same species’ are clearly greenwashing,” the researchers write.

Already carbon emissions from the tar sands produce significantly more carbon than conventional sources with various research showing around 20 percent higher than conventional oil to three times higher. However, such estimates have not included the loss of carbon due to peatland destruction, which the researchers estimate will be equal in total to “seven years worth of carbon emissions by mining and upgrading (at 2010 levels).”

A recent study has found that if the entirety of the tar sands were exploited it would raise global temperatures 0.64 degrees Fahrenheit (0.36 degrees Celsius). This represents around 45 percent of how much the world has warmed since the Industrial Revolution.

“Oil sands mining is frequently criticized as a carbon-intensive means of acquiring oil. Its contribution to the global carbon imbalance
has provoked numerous calls to slow oil sands development, including, most recently, a letter to Canada’s prime minister signed by eight Nobel Peace Laureates,” the authors write.

Criticism of the tar sands does not rest on carbon emissions alone. The tar sands has resulted in the destruction of pristine environments, consumes massive amounts of freshwater, and is allegedly linked to high cancer rates in nearby communities. The mines themselves have been dubbed the world’s largest industrial project.

Still the Canadian government, under Prime Minister Stephen Harper, has relentlessly pursued the expansion of the mines and is now pushing controversial pipelines to bring tar sands oil to a global market either south through the U.S. (the Keystone XL Pipeline) or west to the coast of British Colombia. The government argues exploiting the full-scale of the tar sands is essential to the Canadian economy. 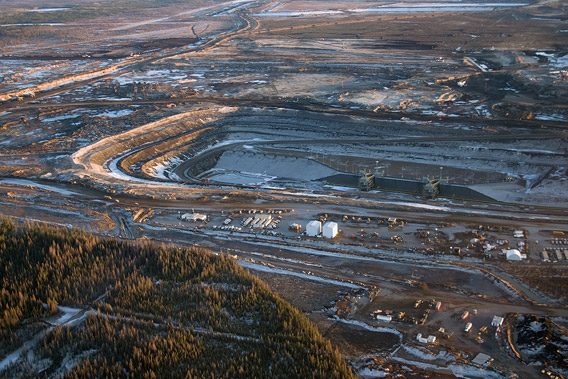 Big oil makes $137 billion, gives 28 percent back to themselves

(02/13/2012) The world’s top five oil companies—BP, Chevron, Conoco Phillips, Exxon Mobil, and Royal Dutch Shell—made a record $137 billion in 2011 beating out the previous record in 2008, reports Climate Progress. Still even as the companies made record profits they produced 4 percent less oil than the prior year.

Kelly Blynn: activists not “letting the pressure off” on Keystone pipeline

(02/06/2012) Along with Bill McKibben and a small cadre of passionate environmental activists, Kelly Blynn co-founded the climate activism group “350.” 350 exemplifies the power of online networks combined with activism and has coordinated some of the largest and most successful environmental protests in history. The 350 team has organized more than 5,200 events in 181 countries around the world. Kelly graduated from Middlebury College with a degree in Geography and Environmental Studies and experience coordinating one of the largest university campus environmental activism groups in the United States. Blynn is currently situated in Washington, D.C.

(01/26/2012) A new report by Media Matters finds that U.S. TV and print media were largely biased toward the construction of TransCanada’s Keystone XL Pipeline, which the Obama administration recently turned down. The report finds that guests and quotes were largely in favor of the pipeline in addition to news outlets consistently repeating job figures for the pipeline that have been discredited.

Harsh words for Canada after it abandons Kyoto Protocol

(12/13/2011) Less than two days after signing on to a “road map” agreement at the UN Climate Summit in Durban, South Africa, Canada has announced it is formally withdrawing from the Kyoto Protocol after failing to meet its emissions’ pledges. Although not surprising, reaction from other nations and environmental groups was not only swift, but harsh.