How best to monitor biodiversity in REDD+ projects? 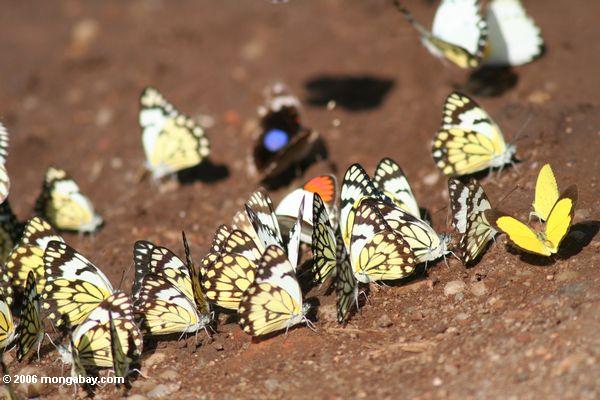 Butterflies feeding on minerals in Uganda. Photo by: Rhett A. Butler.

If done well, REDD+ projects (Reducing Emissions from Deforestation and Forest Degradation) may not only save carbon rich forests, but also protect embattled biodiversity. But what’s the best way to ensure both and carbon and species are preserved under REDD+, a program that proposes to pay nations to keep forests standing? A new study in mongabay.com’s open access journal Tropical Conservation Society (TCS) argues that a one-size-fits-all approach to monitoring biodiversity in REDD+ projects would not only be difficult to develop, but would likely fail given vast differences in forest ecology and threats worldwide. Instead local sites should develop monitoring programs based on a generally approved roadmap.

In their paper the researchers directly oppose an earlier study, also in TCS, that argued for standardized biodiversity monitoring based on camera traps and acoustic monitoring of bats. While researchers admit both methods could play a role in monitoring, they should not be wholly depended on.

“Our analysis indicates that camera trapping for large mammals and acoustic monitoring for bats can be effective monitoring solutions in some tropical areas, but that the model biodiversity monitoring protocol […] will not be suitable for use in all forests, and may not be the most (cost) effective approach in others,” they write.

Going further the authors argue that any attempt at a one-size-fits-all monitoring system will likely prove problematic.

“The forests of the world—ranging from boreal coniferous forests to tropical jungles—differ enormously in their character, species assemblages, ecological interactions, nature and intensity of anthropogenic threats faced. The practicalities and costs of conducting research in these forests also differ,” they write. For example, different forests have unique key species, often requiring a different set of monitoring tools.

Instead the researchers recommend that biodiversity monitoring regimes reflect local conservation goals, incorporate detailed information about the particular forest, monitor several reflective species, track the impacts of management on the ecosystem, and define ahead of time baseline biodiversity in the forest. The authors specifically point to the need to track habitat condition and any disturbance to the forest in order to draw a direct line between observed changes in biodiversity to human action.

“It is vital that REDD+ ecological monitoring programs be tailored to a particular project’s aims and the forest habitat in question, which requires detailed knowledge of the forest habitat and its associated biodiversity,” the authors write. “Such an approach should provide more concrete answers to questions relating to the assumed biodiversity benefits of REDD+ emission reduction management activities.”

(02/02/2012) The International Institute for Environment and Development has published a new report on benefit distribution under Reducing Emissions from Deforestation and Forest Degradation (REDD+) programs. The report includes a top ten list of recommendations to ensure REDD+ works for poor communities that live in and around forests.