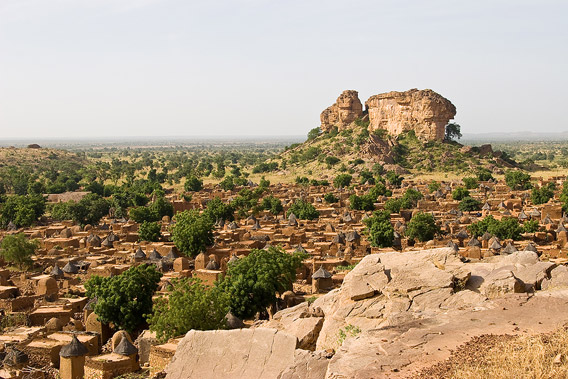 Dogon village Songo in Mali, Africa
. The Dogon are an ethnic tribe in the Sahel. Photo by: Bigstock.

The UN announced yesterday that food security in the Sahel region is deteriorating, putting over 15 million people at risk. Ongoing drought combined with conflict, has pushed the region into a crisis. The situation appears eerily similar to last year when Somalia was hit by a devastating famine due to drought and political instability; the famine left an estimated 30,000 children dead.

“This is already an appalling crisis in terms of the scale and degree of human suffering and it will get worse unless the response plans are properly funded,” John Ging, Director of Operations at the UN Office for the Coordination of Humanitarian Affairs (OCHA), said in a press release. “It’s a matter of life or death for millions who are on the brink.”

Instability in Nigeria and Syria have exacerbated the situation, while a military coup in Mali has pushed between 100,000-200,000 refugees into neighboring countries. Sahel nations, such as Mali, Niger, Chad, Burkina Faso, Mauritania, Senegal, Cameroon, Gambia, Nigeria and South Sudan, the world’s newest nation, are all seen as vulnerable.

Response programs to the food crisis are currently underfunded by over 60 percent according to the OCHA, even as a report released in January found that a delayed response to Somalia crisis cost thousands of lives.

“We all bear responsibility for this dangerous delay that cost lives in East Africa and need to learn the lessons of the late response,” Oxfam’s Chief Executive, Barbara Stocking, candidly stated in a press release on the report. “It’s shocking that the poorest people are still bearing the brunt of a failure to respond swiftly and decisively. We know that acting early saves lives but collective risk aversion meant aid agencies were reluctant to spend money until they were certain there was a crisis.”

Drought is a regular occurrence in the Sahel and communities have long-adapted to dry conditions, however some scientists say recent droughts may be worsening due to climate change.