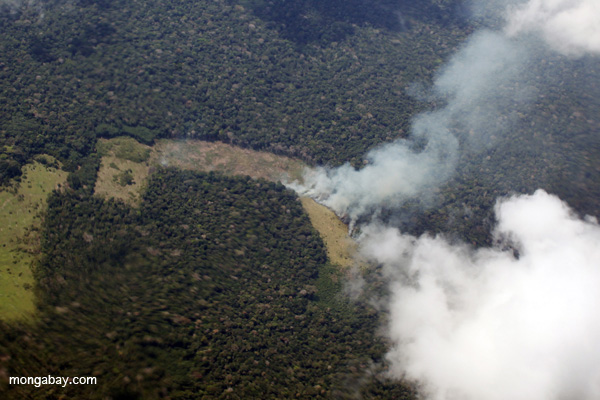 Targeting black soot, methane, and HFCs could reduce global temperatures by 0.5 degrees Celsius by 2050 according to the United Nations Environment Program (UNEP). However since these greenhouse gases are short-lived, i.e. do not linger in the atmosphere for several decades like carbon does, the initiative will only mitigate climate change in the near-term.

According to a statement from the U.S. Department of State: “the coalition will reduce short-lived climate pollutants by driving the development of national action plans and the adoption of policy priorities; building capacity among developing countries; mobilizing public and private funds for action; raising awareness globally; fostering regional and international cooperation, and; improving scientific understanding of the pollutant impacts and mitigation.

While the initiative was heralded as an important step by many environmentalists and scientists, it has met with some criticism.

“Given that we don’t have any prospect of a credible plan to reduce CO2 emissions, the suggestion that immediate cuts in methane and black carbon will reduce the risk of dangerous long-term climate change is pure fantasy,” climate scientists, Myles Allen, with Oxford University told the BBC.

While no one argues that the initiative, if successful, would bring important benefits, some fear it will further overshadow the need to target carbon if the world is to have any chance of avoid runaway climate change.

The new initiative, which will be run under the UNEP, currently includes Canada, Bangladesh, Canada, Mexico, Sweden and Ghana as well as the U.S. The U.S. has pledged $12 million and Canada $3 million to kick-start the initiative. Both the U.S. and Canada have been the targets of fierce criticism over recent years for what has been seen as dragging their feet at international climate negotiations.

(01/12/2012) A new study in Science argues that reducing methane and black carbon emissions would bring global health, agriculture, and climate benefits. While such reductions would not replace the need to reduce CO2 emissions, they could have the result of lowering global temperature by 0.5 degrees Celsius (0.9 degree Fahrenheit) by mid-century, as well as having the added benefits of saving lives and boosting agricultural yields. In addition, the authors contend that dealing with black carbon and methane now would be inexpensive and politically feasible.

(11/30/2011) An effort to decrease emissions of the super greenhouse gas HFC-23 has led to a largely-false carbon market that should be eliminated, argues the Environmental Investigation Agency (EIA). HFC-23 is a byproduct of the refrigerant HCFC-22, which is currently being phased out under the Montreal Protocol for its ozone-depleting and greenhouse gas properties. However, the effort to reduce HFC-23 through a carbon market has been hampered by companies in India and China producing extra HFC-23 just so they can capture and destroy it—and receive lucrative carbon funds.