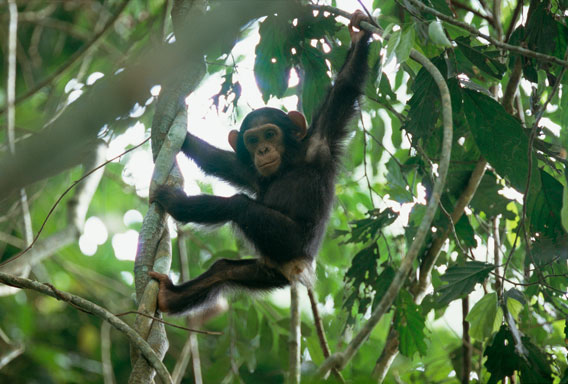 The Republic of the Congo has expanded its Nouabalé-Ndoki National Park by 37,295 hectares (144 square miles) to include a dense swamp forest, home to a population of chimpanzees (Pan troglodytes) that show no fear of humans. Known as the Goualougo Triangle, the swamp forest is also home to forest elephants (Loxodonta cyclotis) and western lowland gorillas (Gorilla gorilla gorilla). The expansion of the park to include the Goualougo Triangle makes good on a government commitment from 2001.

“We commend the Republic of Congo for finalizing this critical process to extend the borders of Nouabalé-Ndoki to include the Goualougo Triangle, one of the great wonders of Africa,” Wildlife Conservation Society (WCS) President and CEO Steve Sanderson said in a press release. “In a world of human use, this extraordinary forest is a reminder of Eden, an untouched gem teeming with chimpanzees, gorillas, and forest elephants. It is the definition of wild nature and must be protected.” The WCS has been working in the park since 1993.

The Gualougo Triangle forest is so remote from human settlements, the closest is over 30 miles away, that the chimpanzees have been described as “naive” since they showed no fear, but instead intense curiosity, when the first conservationists and biologists arrived in the area. Chimps in other parts of Africa are wary of humans since they are hunted as bushmeat and impacted by forest destruction.

Research on the chimps has unveiled new insights into the diversity of the ape’s cultures. WCS conservationists Dave Morgan of the Lincoln Park Zoo and Crickette Sanz of Washington University have discovered that the Goualougo chimps use two different tools to get at termites (one for penetrating the nest, the other for gathering termites), a behavior never recorded elsewhere. Jane Goodall visited the site in 2004.

Nouabalé-Ndoki National Park, with the addition of the Goualougo Triangle, now covers 423,870 hectares (1,636 square miles), an area 50 percent larger than Rhode Island. According to WCS, the rainforest park contains over 300 bird species and 1,000 plant species.

The deal to save Gualougo Triangle was brokered between the Republic of Congo government, WCS, and Congolais Industrielle des Bois (CIB), a private logging company, which gave up its rights to log the forest. 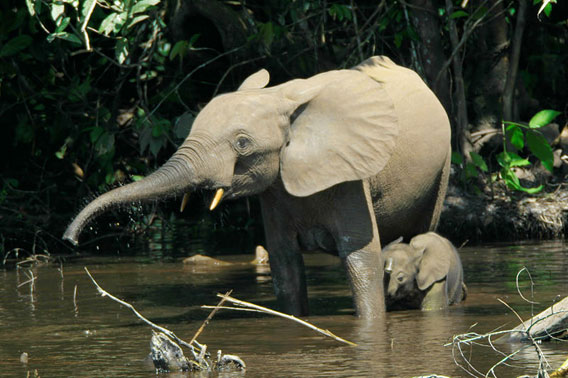 Forest elephants in the Mbeli River in the Nouabalé-Ndoki National Park. Photo by: Thomas Breuer.