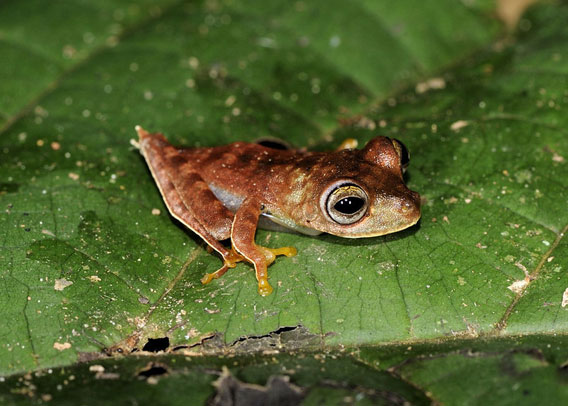 A possible new species of frog: Hypsiboas sp. (nickname “cowboy frog”) has white fringes along the legs and a spur on the heel. The frog was discovered low on a small branch during a night survey in a swampy area west of the RAP base camp at the Koetari River during Conservation International’s Rapid Assessment Program in southwest Suriname. Photo by © Paul Ouboter.

South America’s tiniest independent nation still hides a number of big surprises: a three week survey to the southern rainforests of Suriname found 46 potentially new species and recorded nearly 1,300 species in all. Undertaken by Conservation International’s (CI) Rapid Assessment Program (RAP) the survey found new species of freshwater fish, insects, and a new frog dubbed the “cowboy frog” for the spur on its heel. While Suriname may be small, much of its forest, in the Guyana Shield region of the Amazon, remains intact and pristine. The Food and Agriculture Organization (FAO) estimates that 91 percent of Suriname is covered in primary forests, however this data has not been updated in over two decades.

“Our team was privileged to explore one of the last remaining areas of vast, unroaded wilderness in the world,” RAP director and researcher Trond Larsen said in a press release. “As a scientist, it is thrilling to study these remote forests where countless new discoveries await, especially since we believe that protecting these landscapes while they remain pristine provides perhaps the greatest opportunity for maintaining globally important biodiversity and the ecosystems people depend upon for generations to come.”

“The area was paradise for the entomologists among us, with spectacular and unique insects everywhere. I didn’t even have to look for ants because they jumped out at me,” said Leeanne Alonso, a former CI RAP Director who is now with Global Wildlife Conservation.

But it wasn’t just insects that surprised the researchers: birds, too, were abundant and diverse, at one campsite the group recorded 215 species of birds in just six days. Camera traps also recorded big and medium-sized mammals, which often avoid humans.

“You can really get up close to wildlife here—a camera trap recorded a jaguar about one hundred yards from our camp,” adds Alonso.

The region is also home to the oldest human settlement in southern Suriname: the Werehpai cave. Covered in 313 petroglyphs, the cave saw its first humans seeking refuge some 5,000 years ago.

The scientists worked closely with the indigenous Trio tribe in the area. They hope their data will help the tribe set up small scale eco-tourism in the area.

“The Kwamalasamutu area’s pristine nature and cultural heritage make it a unique destination for more adventurous tourists, who enjoy trekking through the dense rainforest to discover flora and fauna. CI-Suriname and the Trio are hoping to further develop a niche market ecotourism site here, while the recommendations from the RAP will help the community to manage and maintain the 18,000 hectares sanctuary they created around the region’s incredible Werehpai petroglyph caves,” CI-Suriname Executive Director Annette Tjon Sie Fat said.

Even with the findings, the RAP team believes there is much more to discover in the small country. A new team is returning to southern Suriname, along with CI director Russ Mittermeier, for an expedition in March.

Although Suriname possess large tracts of pristine forest, they are imperiled by mining, logging, and a lack of indigenous rights. 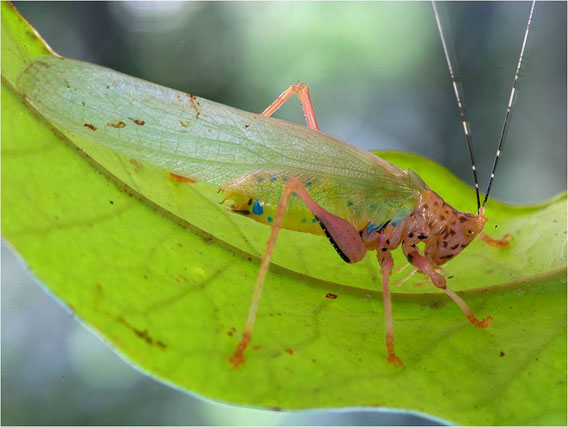 A potentially new species of katydid (Vestria sp.). Four species of this genus are known from lowland forests of Central and South America. These insects, nicknamed “Crayola” katydids because of their striking coloration, are the only katydids known to employ chemical defenses, which are effective at repelling bird and mammalian predators. Photo by © Piotr Naskrecki. 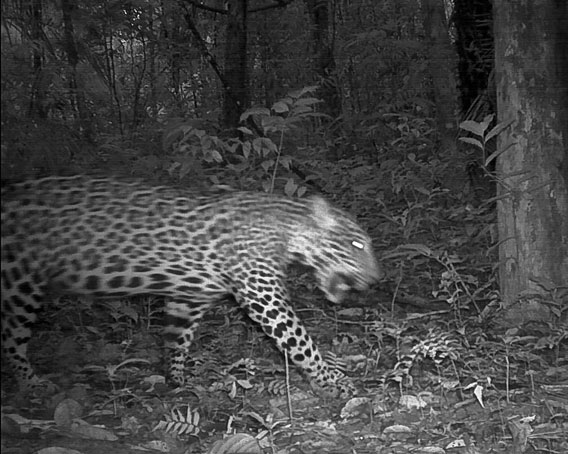 Camera traps captured a jaguar (Panthera onca) on the prowl. Jaguars are sit-and-wait predators, pouncing on unsuspecting victims, which may include such large mammals as tapirs and deer, from low branches. Despite their reputation, jaguars rarely, if ever, attack humans and far more jaguars have been hunted by people than the other way around. Photo by © Conservation International Suriname. 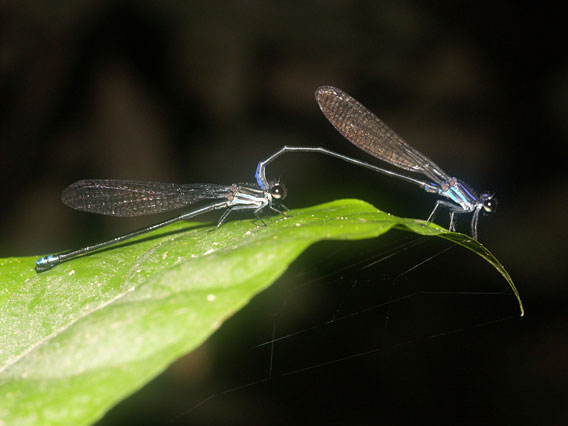 Potentially new species of damselfly, a male and female of Argia sp. in tandem at Iwana Samu. Argia is the most speciose damselfly genus in the New World, and four of the eight species of this genus found during this RAP are new to science. The new species photographed here breeds in forest swamps and its adults perch on rocks, logs, and twigs close to water’s surface, and on leaves, twigs and on the ground along forest trails near swamps, usually on bare substrates in the sun. Photo by © Natalia von Ellenrieder. 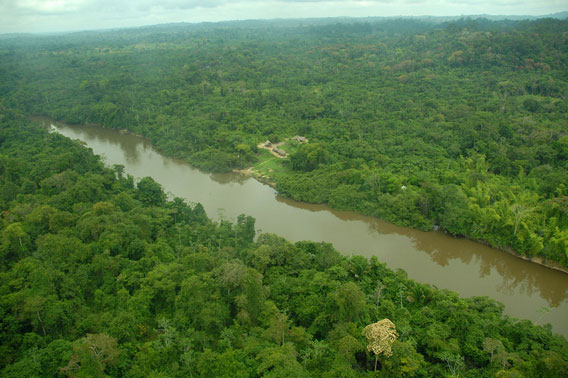 Aerial view of southwest Suriname next to the village of Kwamalasamutu, where scientists with Conservation International (CI) explored from August to September 2010, in an effort to document the region’s poorly known biodiversity and help develop sustainable ecotourism opportunities for the local people. Photo by © Trond Larsen. 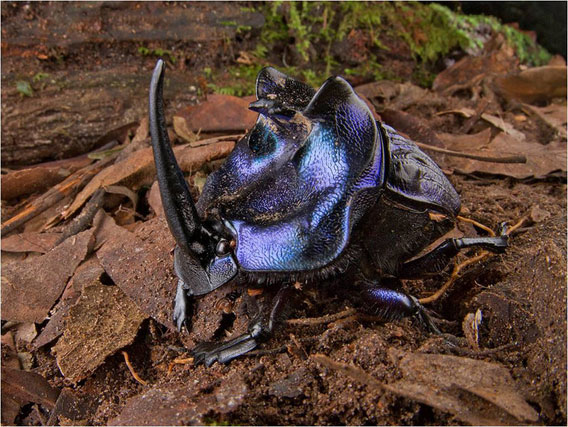 Photographed on the RAP Suriname expedition: Coprophanaeus lancifer is the largest dung beetle species in the Neotropics. While weaponry in most animal species is restricted to males, females of this species possess a long head horn which they use to battle with other females over carrion (animal carcasses). Males also use a long horn to fight over females. With an enormous thorax filled almost entirely with muscle, C. lancifer is incredibly strong. Where the species is common, it may bury an animal carcass as large as a pig in only a few days. Photo by © Trond Larsen. 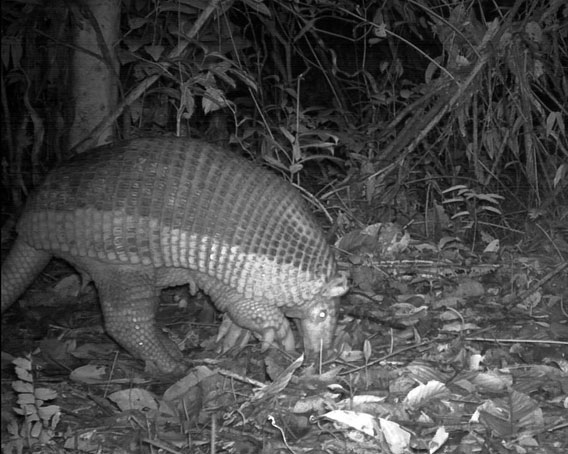 Despite its large size and heavy body armature, the Giant Armadillo (Priodontes maximus) is a gentle animal, feeding primarily on termites and ants, which it digs out from underground nests using its huge claws. Giant armadillos are rarely seen due to their nocturnal habits, but their huge burrows are a common sight in the forests of Kwamalasamutu. This species is declining across its range in South America, primarily as a result of excessive hunting and habitat loss. Photo by © Conservation International Suriname.

(01/08/2012) A new species of mouse lemur has been discovered in eastern Madagascar, report researchers from Germany. The species is described in a recent issue of the journal Primates.

The biggest new species discoveries in 2011

(12/26/2011) Every year scientists describe thousands of species for the first time. 2011 was no different, so here’s a look at some of the significant new species discoveries for the year. New species discoveries are bound to continue as genetic analysis becomes more widespread and scientists conduct surveys of ever more habitats. But species loss also continues, and that is something considerably more difficult to quantify. Cataloging the disappearance of a species is extremely costly — final proof can take years. Nonetheless in 2011 the book was closed on two particularly conspicuous creatures: neither the Vietnamese rhino nor the western black rhino roam the wilds any more.