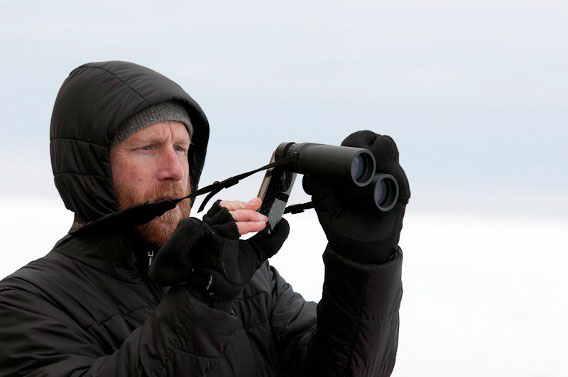 Hugh Powell is science editor at the Cornell Lab of Ornithology as well as a contributor to Woods Hole Oceanographic Institution’s Oceanus and other publications. He’s traveled extensively while writing, including stints in Antarctica for WHOI’s Live from the Poles. Before finding his niche as a science writer, Hugh studied the interconnections between black-backed woodpeckers, insects, and forest fires in Montana. He currently resides in Ithaca, New York.

Morgan Erickson-Davis: How did you get your start as a writer?

Hugh Powell: I began to be interested in science writing while working on my master’s degree in ecology at the University of Montana. While studying fire ecology I became fascinated by the intricate relationships between forest fires, beetles, and woodpeckers. I realized that what I had stumbled across was just one of innumerable stories about natural history, evolution, and the environment that are full of drama, surprise, and their own peculiar form of beauty. While a scientist typically spends years uncovering one or a few of these stories, your typical member of the public remains completely unaware of them. Thinking that as a science writer I’d be able to bring some of these stories to wider attention, I joined the science writing program at the University of California, Santa Cruz. This one-year graduate program has a long and successful history of taking people with scientific backgrounds and giving them a crash course in journalism. It was one of the most productive and valuable years I’ve ever spent.

Morgan Erickson-Davis: What conservation issues most interest you?

Hugh Powell- As an ecologist, I’m very interested in the problems of habitat loss, resource conservation, and climate change. I work at the Cornell Lab of Ornithology, so birds are typically the first animals I think about. I’m also interested in understanding the complex relationships between animals and their environments—often these are cautionary tales where people do one thing and get a totally unexpected result because ecology turns out to be more complicated than we had realized. I also love the ocean, so issues of fisheries management, sustainable seafood, seabird conservation, and reducing bycatch are important to me.

Morgan Erickson-Davis: Can you offer an example or two of these cautionary tales?

Hugh Powell: One of the most striking is what has happened again and again with pesticides, bioaccumulation, and pesticide resistance. There are innumerable specific examples. But to think that the discoverer of DDT got the Nobel prize before we had to outlaw it to save our pelicans, eagles, and ospreys, shows how badly we had underestimated the ecological connectedness of things. Another less well known example I learned while I was studying forest ecology and bark beetles in Montana. These are economically devastating insects that communicate using very simple and very effective sets of chemicals called pheromones. These scents waft through the forest and help to coordinate the beetles as they attack and kill the trees they infest. Some very good organic chemists spent years synthesizing these pheromones so that they could distract, confuse, or lure away the beetles from valuable stands of trees—only to discover that the system varied so much geographically that it was essentially impossible to come up with a standard mixture that worked.

Morgan Erickson-Davis: You seem to have a special affinity for birds. How did that come about?

Hugh Powel:l My dad has been a birder since he was a kid, and every vacation we ever took when I was growing up involved birds. Out of four siblings, I was the only one it stuck with—my brothers and my sister essentially flinch every time they hear a word like “whimbrel” or “ptarmigan.” But for me, birding has been an entryway into most of the best things I’ve done in my life. Birds are excellently suited for scientific study: they are the only vertebrates that stand out in the open, flash brilliant colors at you, and sing their names at the top of their lungs. Added to that, they’re beautiful creatures that capture the imagination and speak to us about the impossible each time they take flight.

Morgan Erickson-Davis: You’ve written quite extensively on marine issues. Any especially troubling or interesting trends you’ve uncovered during the course of your reporting?

Hugh Powell: I’m sorry to say that almost everything about the ocean is troubling right now. It’s getting warmer, it’s acidifying, it’s rising, it’s running out of fish, it’s choked with plastic, it’s polluted, and it’s too noisy for whales and other creatures to communicate with each other. But it’s also the largest habitat on earth, it’s immensely deep and varied, it’s a constant source of mystery and discovery, it is saving our butts (for the time being) by absorbing about half the carbon dioxide we as a species have released so far, it’s the place where life originated, and it has that same ability that birds do to capture our imaginations and make us think about the impossible and the infinite.

Morgan Erickson-Davis: What would you say is the most important thing you’ve learned about environmental writing?

Hugh Powell: It’s very hard to narrow this down to a single most important thing. But I’d say it’s to remember to keep people in your stories. Environmental stories are often about pressing causes or problems, and there’s an awful lot of important information to convey to readers. It can be easy to think that by providing the right set of statistics—number of acres remaining or tons released into the environment—readers will become as passionate about the topic as your sources are. But people read stories to find out what happens to the main characters, so I need to make sure people have enough detail to go on that those characters are real.

Hugh Powell: Ask for stuff. I was brought up with polite English manners, and it’s always a struggle to ask people for something they haven’t offered. Though it seems like prying, I’ve been amazed at how people will open up to you when you give them the chance. Often the only reason they haven’t given you the information or perspective you need is because it’s second nature to them; they don’t realize other people don’t know it. When I was in Antarctica for the first time, Chris Linder (my colleague, a photographer) and I were amazed at how helpful the staff at McMurdo Station were, and pretty soon we realized that if we asked for things we needed, people would try and make them happen for us. That’s how we got trained in sea-ice travel, hitchhiked our way 20 miles across the ice when bad weather had grounded the helicopters, and managed to visit a stone igloo built in 1911 by Captain Scott’s men in the absolute middle of nowhere. When writing about the natural world, there’s simply no substitute for seeing things for yourself—so keep asking until you’ve seen everything you can.

(01/11/2012) The number of species identified by scientists as vulnerable to climate change continues to rise along with the Earth’s temperature. Recent studies have found that a warmer world is leading to premature deaths of harp seal pups (Pagophilus groenlandicus) in the Arctic, a decline of some duck species in Canada, shrinking alpine meadows in Europe, and indirect pressure on mountain songbirds and plants in the U.S. Scientists have long known that climate change will upend ecosystems worldwide, creating climate winners and losers, and likely leading to waves of extinction. While the impacts of climate change on polar bears and coral reefs have been well-documented, every year scientists add new species to the list of those already threatened by anthropogenic climate change.

New seabird discovered from Hawaii, but no one knows where it lives

(08/30/2011) Researchers have uncovered a new seabird native to Hawaii stuffed in a museum. Originally identified as a smaller variation of a little shearwater (Puffinus assimilis), DNA tests showed that the bird, which was collected over four decades ago, was in fact a unique species. Named Bryan’s shearwater (Puffinus bryani), the fate of this bird in the wild remains unknown.

Last search for the Eskimo curlew

(06/29/2011) The Eskimo curlew is (or perhaps, ‘was’) a small migratory shorebird with a long curved beak, perfect for searching shorelines and prairie grass for worms, grasshoppers and other insects, as well as goodies including berries. Described as cinnamon-colored, the bird nested in the Arctic tundra of Alaska and Canada during the summer and in the winter migrated en masse as far south as the Argentine plains, known as the pampas. Despite once numbering in the hundreds of thousands (and perhaps even in the millions), the Eskimo curlew (Numenius borealis) today may well be extinct. The US Fish and Wildlife Service (USFWS) has decided to conduct a final evaluation of the species to determine whether its status should be moved from Critically Endangered to Extinct, reports Reuters.