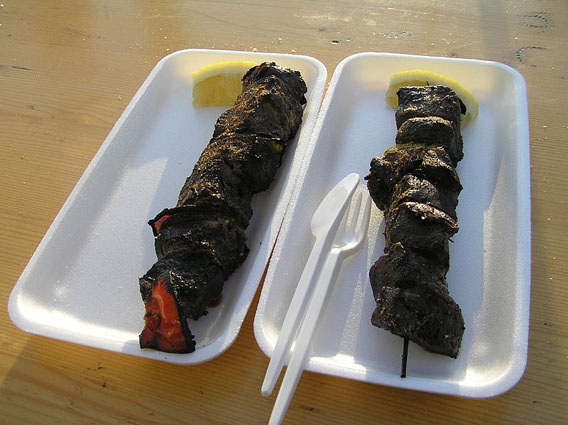 How do you end a decades-long conflict between culture and conservation? How do you stop a conflict where both sides are dug in? A new paper in Nature proposes a way to end the long and bitter battle over whaling: environmentalists could pay whalers not to whale.

The idea proposes a marketing scheme in which a quota of whales would be sold to whalers. The key, however, is that environmental groups or wealthy conservation-minded individuals could also purchase quotas, essentially saving individual whales from whalers. The authors calculated that the life of a minke whale would cost around $13,000 and a fin whale around $85,000, prices, they say, that are within the reach of a number of conservation organizations. According to the study, whaling is a $31 million industry, while environmental groups spend at least $25 million on anti-whaling campaigns and activities. Under a new market scheme such funds could instead go to “buy” whales from whalers.

Although whaling was banned in 1982, today commercial whaling is conducted by Japan, Norway and Iceland, each of which has found a way to circumvent the moratorium. All told around 1,600 whales are hunted annually by the three nations. Additionally a few hundred whales are hunted by indigenous groups annually.

It’s unclear how attractive such a quota market would be to either environmentalists commercial whalers. For environmentalists the idea would require re-legalizing whaling even in a restricted sense, something they may not be able to stomach. While, for whaling nations, the agreement may mean an inevitable end to whaling altogether as quotas are bought out.

Whaling talks break down: ban stays in place, yet whaling will continue

(06/23/2010) The International Whaling Commission (IWC), which was supposed to decide a way forward for whales over the next decade has ended without an agreement. Talks broke down, according to participants, because countries opposed to whaling and those that continue hunting and killing whales despite a ban on commercial whaling—i.e. Japan, Norway, and Iceland—have been unable to find enough common ground to pound out an agreement.

To whale or not to whale?: nations, environmental groups do some soul-searching

(06/22/2010) There are two ways forward on whaling according to visions being put forward at the International Whaling Commission this week. One way is to uphold the 24-year-long ban on hunting and killing whales. While this road sends a strong pro-conservation message, it also means that Japan, Norway, and Iceland will continue whaling as they have over the past couple decades, killing an average of 2,000 whales annually. These three countries employ a variety of excuses for their whaling—Iceland and Norway simply state that they do not recognize the whaling ban while Japan claims its whaling is only done for ‘scientific purposes’—but it is clear that they will not end whaling and, to date, there is no punishment for their dismissal of the international treaty.

A new reason to ban whaling: your health

(11/28/2008) Health officials have recommended a ban on the eating of pilot whales, a traditional food source, in the Faroe Islands, reports New Scientist. The build-up of toxins — which bioaccumulate up the food chain as predators feed on tainted organisms — have rendered whale meat harmful to humans.