New research announced at the 17th UN Climate Summit in Durban, South Africa finds that under current pledges for reducing emissions the global temperature will rise by 3.5 degrees Celsius (6.3 degrees Fahrenheit) from historic levels, reports the AFP. This is nearly double world nations’ pledge to keep warming below 2 degrees Celsius (3.6 degrees Fahrenheit). The report flies in the face of recent arguments by the U.S. and others at Durban that current pledges are adequate through 2020.

According to the analysis by Ecofys, the Potsdam Institute for Climate Impact Research, and Climate Analytics current pledges would push global emissions to 55 billion tonnes of CO2 by 2020. However research has shown that emissions need to be at 44 billion tons of CO2 or less by 2020 to keep the world from heating up beyond the 2 degrees Celsius target. The findings are similar to those of the United Nations Environment Program (UNEP), which reported a significant gap between current pledges and the 2 degrees Celsius target.

“Even the 2 degrees Celsius pathway itself is difficult, as the world will have to cut global emission levels 2 percent a year (on 2000 levels) from 2020 to 2050. But leaving mitigation decisions until 2020, i.e. staying with the current pledges, would mean those emissions would need to be reduced by 3.8 percent a year after 2020, almost twice as fast,” reads a press release from Ecofys. In other words, the quicker nation’s start cutting emissions, the better chance the world has of keeping below the 2 degrees Celsius target.

At Durban the U.S. is pushing to stick with voluntary emissions through 2020 and only then discussing a new legally binding contract that would replace the Kyoto Protocol. However, most of the world’s developing nations and the EU would like to see an extension of the Kyoto Protocol for industrial nations, while building a “road map” for developing nations to start signing up for emissions cuts. 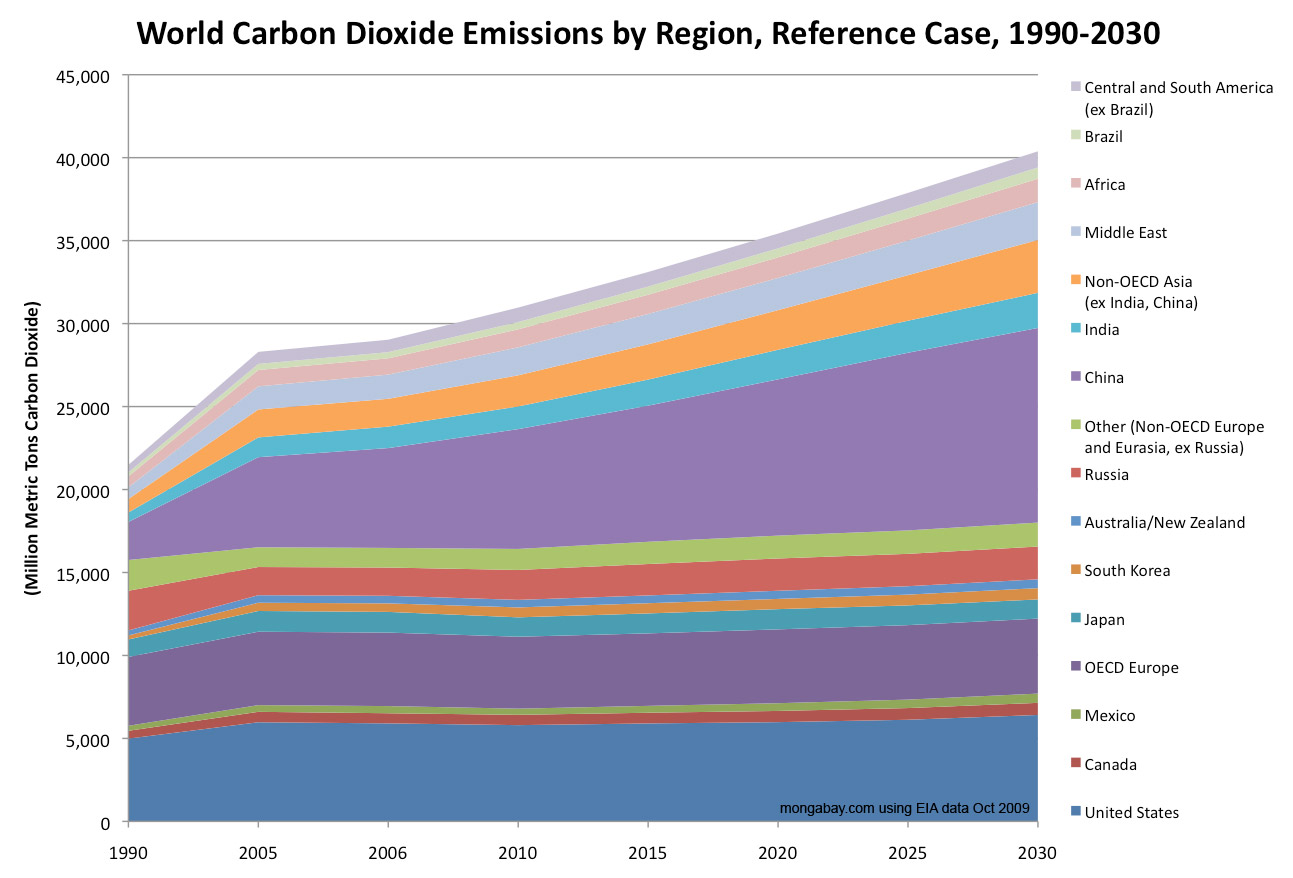 (12/04/2011) Total carbon emissions for the first time hit 10 billion tonnes (36.7 billion tonnes of CO2) in 2010, according to new analysis published by the Global Carbon Project (GCP) in Nature Climate Change. In the past two decades (since the reference year for the Kyoto Protocol: 1990), emissions have risen an astounding 49 percent. Released as officials from 190 countries meet in Durban, South Africa for the 17th UN Summit on Climate Change to discuss the future of international efforts on climate change, the study is just the latest to argue a growing urgency for slashing emissions in the face of rising extreme weather incidents and vanishing polar sea ice, among other impacts.

(12/01/2011) Purchasing a full page ad in the Canadian paper the Globe and Mail, a group of African leaders and NGOs is calling on Canada to return to the fold on climate change. Canada has recently all-but-confirmed that after the ongoing 17th UN Summit on Climate Change in Durban, South Africa, it will withdraw entirely from the Kyoto Treaty. The country has missed its targets by a long-shot, in part due to the exploitation of its tar sands for oil, and is increasingly viewed at climate conferences as intractable and obstructive. In the eyes of those concerned about climate change, Canada has gone from hero to villain. Yet notable African activists, including Archbishop Desmond Tutu, are pushing back.