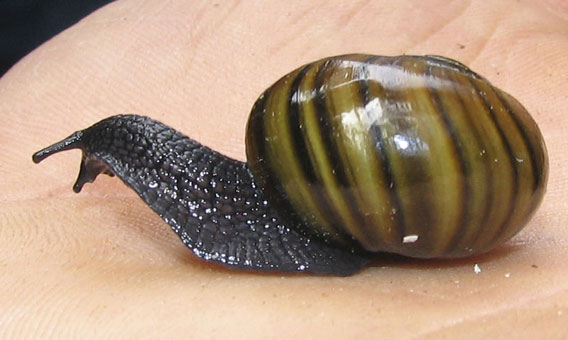 Eight hundred large carnivorous snails, known as Powelliphanta snails (Powelliphanta augusta), died in a Department of Conservation (DOC) fridge in New Zealand over the weekend. A faulty temperature gauge caused the fridge to cool down to zero degrees Celsius, slowly killing all the molluscs but a lone survivor. The snails in question were taken from Mount Augustus into captivity before their habitat was mined for coal. Gravely endangered, Powelliphanta snails are endemic to the South Island of New Zealand.

“The temperature probe … measured the temperature incorrectly. It said it was really hot in the container so it sent a message to the chiller unit to cool the unit down,” Jose Watson with the DOC told The Press. While the species is known to survive cold temperatures for brief periods, they did not survive the malfunctioned fridge. Remarkably, one individual was found alive.

In 2007, 6,000 Powelliphantia snails were removed from Stockton Plateau ahead of mountaintop removal coal mining operation by Solid Energy. The species had only been discovered as recently as 1996.

“All they lived on was 5 hectares on the top of Mt Augustus. We wanted that small corner left. Instead, Solid Energy mined the lot,” Nicola Vallance with conservation organization, Forest & Bird, said in a press release.

While the dead snails were apart of a population of 1,600 still being kept in captivity, 4,000 of the snail population have been re-introduced into the wild on the Denniston Plateau. Unfortunately, this population is also imperiled by coal mining plans. The species is listed as Nationally Critical by the New Zealand government, a listing that corresponds to Critically Endangered according to the IUCN Red List.

Watson said they expected the lost population to be recovered in a few years. Forest & Bird, however, disagrees saying the population is breeding too slowly in the wild to survive and may well go extinct.

(11/10/2011) A new species of snail with a bizarre shell has surprised scientists. Discovered near massive waterfalls in pristine lowland rainforest in New Guinea, the tiny new species’ shell is shaped like a cornucopia, spirals flying freely instead of fused together like most shells. Latvian malacologist (one who study molluscs) Kristine Greke, who described the new species, named it Ditropopsis mirabilis, meaning miraculous or extraordinary. To date, scientists are uncertain why the super small snail—2 to 6 millimeters (0.07 to 0.23 inches)—would have evolved such a strange shell.

(10/06/2011) The US Fish and Wildlife Service announced yesterday that the believe two species in Florida have vanished into the long dark night: the South Florida rainbow snake (Farancia erytrogramma seminola) and the Florida fairy shrimp (Dexteria floridana). The species were under review for possibly being added to the Endangered Species Act (ESA), but it’s likely the review came decades too late.

Over 900 species added to endangered list during past year

(06/16/2011) The past twelve months have seen 914 species added to the threatened list by the world’s authority of species endangerment, the International Union for the Conservation of Nature (IUCN)’s Red List. Over 19,000 species are now classified in one of three threatened categories, i.e. Vulnerable, Endangered, and Critically Endangered, a jump of 8,219 species since 2000. Species are added to the threatened list for a variety of reasons: for many this year was the first time they were evaluated, for others new information was discovered about their plight, and for some their situation in the wild simply deteriorated. While scientists have described nearly 2 million species, the IUCN Red List has evaluated only around 3 percent of these.