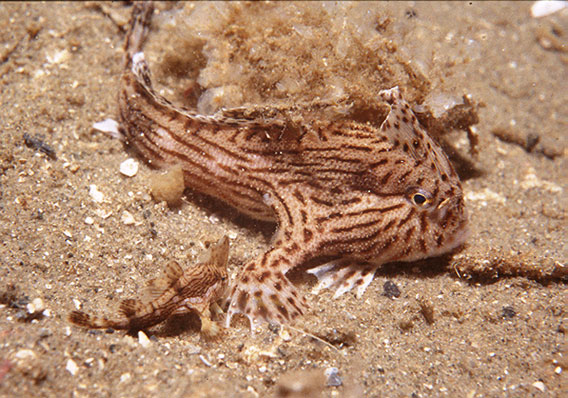 Evolution is a bizarre mistress. In her adaptation workshop she has crafted parrots that don’t fly, amphibians with lifelong gills, poison-injecting rodents, and tusked whales. In an evolutionary hodge-podge that is reminiscent of such mythical beasts as chimeras and griffins, she has from time-to-time given some species’ attributes of others, such as the marine iguana who is as happy underwater as a seal, the duck-billed platypus that lays eggs like a reptile, and the purple frog that has a lifestyle reminiscent of a mole. Then there’s one of her least-known hodge-podges: the fish who ‘walks’ with hands instead of swimming.

Handfish, as they are aptly known, have hand-shaped pectoral fins that allows the fish to quite literally walk along the bottom of the sea searching for tantalizing worms and crustaceans. Perhaps this is not as surprising as it first sounds: pectoral fins are thought also to have evolved into the forelimbs of everything from rats to frogs to lizards. So, walking on fins is little different from walking on legs, though much rarer today. Fifty million years ago handfish were present in many of the world’s oceans, but today there are only 14 species left–nine of which were only described only last year–and they are solely found in the waters around Australia. Handfish are a unique branch of the much more widespread anglerfish: characterized by a fleshy tip on their head which is used to attract prey.

One of the most spectacular species is the spotted handfish (Brachionichthys hirsutus). With a mohawk-like angler, a wild pattern of spots or stripes, and a glum expression, the spotted handfish looks like the fish-version of a rebel from the 50s: they have a James Dean or young Elvis quality about them.

“It is only known from Tasmanian waters. It is the only anglerfish that has this particular pattern of spots and lines; each fish having its own unique pattern,” says Mark Green with Tasmania’s Commonwealth Scientific & Industrial Research Organization (CSIRO). In fact, researchers studying the fish have been able to track individual spotted handfish by their spot or stripe patterns.

But the spotted handfish has another claim to fame, according to Green: “It is recognized as the first marine fish to become threatened with extinction.”

The spotted handfish is listed as Critically Endangered by the IUCN Red List, the most dire rating before extinction. Found only in Tasmania’s Derwent estuary, the spotted handfish was once considered common but by the mid-1990s it had nearly totally vanished.

“When I first started working on this project in 1997 only 6 spotted handfish had been seen during the pilot project (a broad scale search) in the year before. This was just after listing [the fish as endangered] and it was all pretty much a big unknown. Myself and Barry Bruce started diving in areas where the six specimens had been found, our aim was to try and locate a breeding colony so we could begin collecting basic biological information about reproduction and start mapping the population,” says Green. “We did a few dives without seeing any handfish, and then when we did find one it was very exciting. There were underwater high fives and lots of underwater yahoos. Once we had located one fish it was just a matter of expanding the search in the general area to find others during more dives. Of course, that was just the start of the project, and using this method we have located nine restricted locations that have local populations of spotted handfish.”

In total researchers estimate a global population of around 2000-3000 individuals. Unfortunately some of the populations are so isolated it is impossible for them, without human intervention, to mix with others. In addition, one of the handfish communities completely vanished between 1999 and 2005.

“We don’t know why this local extinction happened as we didn’t have the resources to monitor the site during the intervening period,” says Green.

After a decade and a half researchers remain uncertain as to why the species has fallen so far, though they suspect a number of human impacts are plaguing the fish.

Green lists off threats such as “loss of critical habitat, warming waters due to climate change, processes that result in the dredging or damage the sea floor where the fish is found, collection by poachers, changes in the benthic community which may result in direct or indirect impacts.” One of the changes in the sea-bottom (or benthic) community has been the introduction of the northern Pacific seastar. Researchers believe this seastar is indirectly hurting the reproductive efforts of the spotted handfish by preying on the sea tulip, also known as the stalked ascidian. During spawning season (September and October) spotted handfish lay their egg masses on the sea tulips and other marine species such as seaweed. The female handfish then jealously guard the eggs for two months prior to hatching. Less sea tulips may mean less places to safeguard eggs.

Efforts by the Derwent Handfish Recovery Project include continued monitoring of spotted handfish populations, captive breeding, and creating artificial spawning sites to make up for the decline of sea tulips in the area. Captive breeding to date has proven difficult. After years of little success, researchers were able to release 155 captive-reared spotted handfish in 1999. The fish were tagged and two weeks later researchers located 5 of them. Yet in later dives the researchers were unable to find a single tagged handfish, perhaps implying a high mortality of the captive-bred individuals. Artificial spawning sites have shown more success with researchers believing that it has been effective in expanding spawning sites. A number of organizations have provided further support for the spotted handfish, including the Reef Life Survey, Aquenal Pty Ltd, Veolia Environmental Services, Institute of Antarctic and Marine Studies, and funding from the government grant program, Caring for our Country.

Green says the public can help save the spotted handfish by “not contributing to any of the threatening processes” such as illegal collection. In addition, concerned citizens should “[petition] the governments for better resources to be allocated to research and protect the three handfish species listed as threatened.” On top of the spotted handfish, the Australian government considers the red handfish (Thymichthys politus) and the Waterfall Bay handfish (Brachiopsilus ziebelli) as Vulnerable to extinction. Though much remains unknown about the spotted handfish, even less is known about most of the world’s other handfish species. More research is needed if the whole handfish family is not to disappear.

A perfect way to describe a little rebel of a fish. 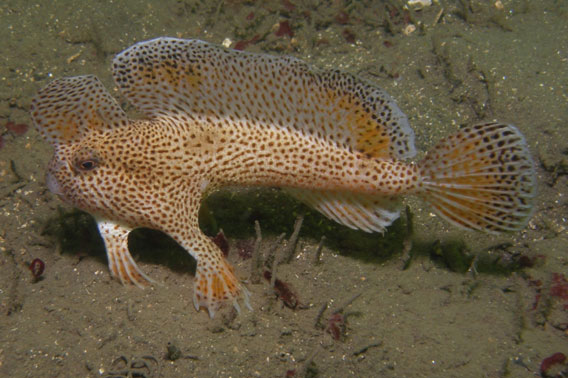 A spotted handfish hanging out in the mud. Photo by: Mark Green – CSIRO. 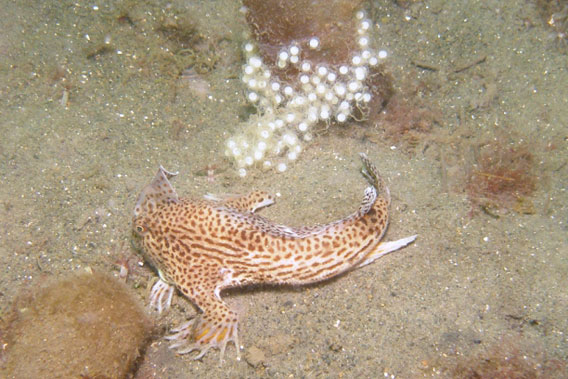 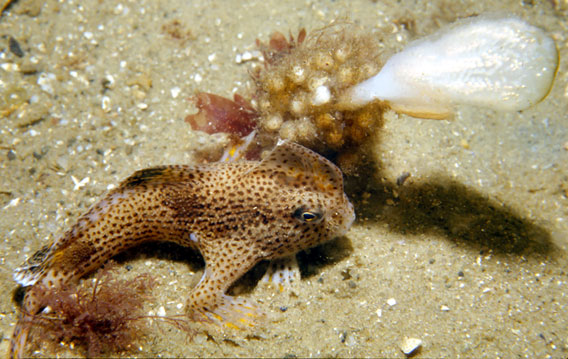 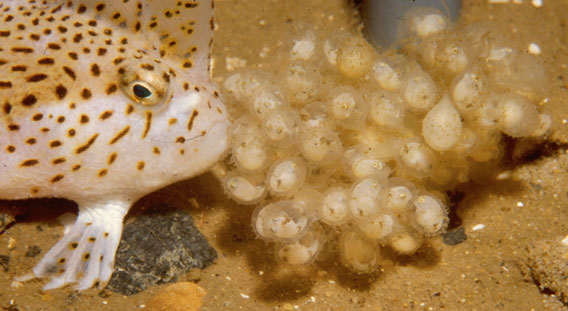 Close-up of female and eggs. Photo by: Mark Green – CSIRO. 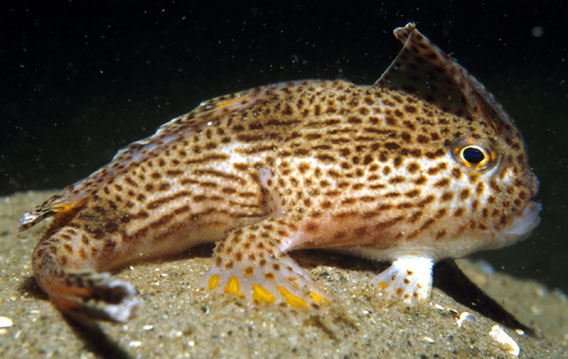 A last look at the spotted handfish. Photo by: Mark Green – CSIRO.

(06/20/2011) Multiple and converging human impacts on the world’s oceans are putting marine species at risk of a mass extinction not seen for millions of years, according to a panel of oceanic experts. The bleak assessment finds that the world’s oceans are in a significantly worse state than has been widely recognized, although past reports of this nature have hardly been uplifting. The panel, organized by the International Program on the State of the Ocean (IPSO), found that overfishing, pollution, and climate change are synergistically pummeling oceanic ecosystems in ways not seen during human history. Still, the scientists believe that there is time to turn things around if society recognizes the need to change.

(06/02/2011) As if being a major contributor to global warming wasn’t enough, the increasing amount of carbon dioxide produced through human activity is also acidifying our oceans – and doing so more rapidly than at any other time in more than half a million years. New projections show that at current rates of acidification, clownfish and many species of algae may be unable to survive by 2100.