A blackspot tuskfish (Choerodon schoenleinii) has been photographed picking up a clam in its mouth, swimming over to a rock, and then using the rock as an anvil by smashing the clam against it until it breaks open. In the journal Coral Reefs scientists argue this is the first conclusive evidence of a fish using tools. Once thought only the domain of humans, biologists have found that tool use is actually present all over the animal kingdom, from elephants to chimps, and crows to capuchins. Such tool use is often considered evidence of higher intelligence.

“The pictures provide fantastic proof of these intelligent fish at work using tools to access prey that they would otherwise miss out on,” said Culum Brown of Macquarie University and lead author of the paper in a press release. “It is apparent that this particular individual does this on a regular basis judging by the broken shells scattered around the anvil.”

The photos, taken by professional diver Scott Gardner in the Great Barrier Reef, shows that the fish doesn’t just strike blindly. Clam in mouth, it twists its head to hit the shell precisely on both sides.

However, the argument that this is tool use may be controversial as scientists have different definitions of tool use, some more rigorous than others. For example, tool use has confined by some to those species that actually hold the tool itself. But Brown argues that is too strict a litmus test for fish given they do not have hands, trunks, or tentacles.

The blackspot tuskfish is not the first marine animal to use tools. Scientists recently discovered that the veined octopus (Amphioctopus marginatus) uses coconut shells as shelters, a rare instance of tool use not involving food.

Tool use may be just as common underwater as it is on land say researchers.

“We really need to spend more time filming underwater to find out just how common tool use is in marine fishes,” says Brown. “It really is the final frontier down there.”

The blackspot tuskfish, also known as the green wrasse, is listed as Near Threatened by the IUCN Red List due to overfishing and destructive fishing practices, such as dynamite fishing. 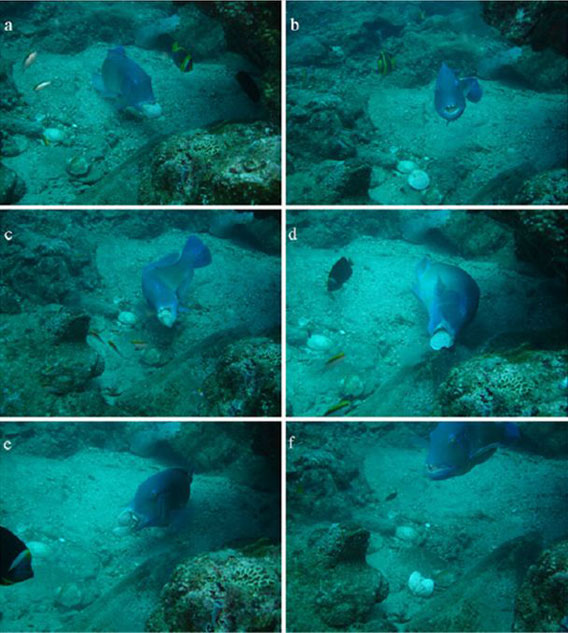 A blackspot tuskfish breaks open a clam using an underwater rock as an anvil. Photos by: Scott Gardner.

(12/15/2009) Highly-intelligent, octopuses have been observed opening containers, navigating mazes, and escaping from cages. Now, researchers have discovered a new intellectual feat for the octopus: tool use. Once the province of humans only, over the last 50 years researchers have discovered that many species—including primates, apes, and birds—employ tools, but the octopus is the first invertebrate.

(07/13/2011) Reptiles have long been thought to be dim-witted, but a new study in Biology Letters finds that the Puerto Rican anole, a type of lizard, can match birds in smarts. Using cognitive tests that have been previously used on birds, researchers with Duke University found that the lizards were capable of solving a problem they’ve never encountered before, remembering the solution in future trials, and even changing techniques when presented with new challenges. In fact, the tiny anoles solved the test with fewer tries than birds. Given reptiles’ reputation of being slow-on-the uptake the head author, Manuel Leal, said the findings are ‘completely unexpected’.

(03/10/2011) Less than 200 blond capuchins (Cebus falvius) survive in the highly-fragmented habitat of Brazil’s Atlantic Forest. But this tiny group of monkeys, only rediscovered in 2006, is surprising scientists with its adept tool-using abilities. Displaying similar behavior to that which made the chimpanzees of Gombe famous worldwide, the blond capuchins modify sticks to gather termites from trees; however, according to the study published in Biology Letters the blond capuchins use two techniques never witnessed before: twisting the stick when inside the termite nest and tapping the nest before inserting the stick.