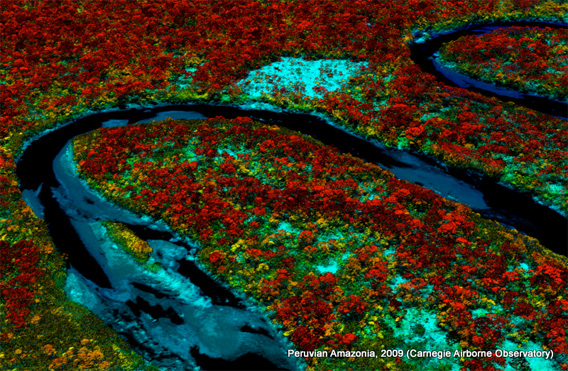 Tambopata rainforest in Peru as mapped by CAO.

A new airplane-based remote-sensing and analysis system will enable scientists to catalog tree species as they create three-dimensional maps of tropical forests.

Unveiled today at the Hiller Aviation Museum in San Carlos, California by Greg Asner of the Carnegie Institution’s Department of Global Ecology at Stanford University, the newest version of the Carnegie Airborne Observatory (CAO) will offer powerful insights into the composition and biology of tropical forests.

“With CAO II we’ll be able not only map the extent of a forest, but its quality and composition,” Asner, director of CAO, told mongabay.com.

CAO combines optical, chemical, and laser sensors aboard aircraft to create high-resolution, three-dimensional maps of vegetation structure. These maps can be used to detect small changes in forest canopy structure from selective logging, measure biomass in dense tropical rainforests, and distinguish between plant species. It has the potential to inventory biodiversity across 40,000 acres of rainforest per day by detecting the chemical and spectral (light-reflecting) properties of individual plant species across a diverse landscape.

For this to happen, Asner and his team first had to build up a catalog of the chemical and spectral properties nearly 5,000 plant species collected during extensive field work. Then Asner’s team worked with engineers at NASA’s Jet Propulsion Laboratory to build the Airborne Taxonomic Mapping System (AToMS), the most advanced airborne imaging spectrometer ever developed.

Asner plans to put the system to work immediately. Over the next three months he and his team will conduct aerial and on-the-ground surveys of the Western Amazon, which houses the most biodiverse rainforests on the planet. The immediate goal is to assess the impact of last year’s catastrophic drought on forests of the Peruvian and Colombian Amazon. Initial work suggests these forests, which have long been thought to be among the most resilient to climate change, were particularly affected by the drought, which was the worst on record and came just five years after a “hundred-year drought” in 2005. Asner says the data collected during the mission will help researchers understand how the Amazon is changing.

The new system will support ongoing work to quantify carbon stocks, which is critical to the REDD+ (Reducing Emissions from Deforestation and Degradation) program. REDD+ will compensate tropical countries for protecting forests.

To support REDD efforts, Asner’s team has developed an advanced satellite-based carbon mapping tool for use by tropical countries. Asner is now working with Google Earth to make the tool more widely available.

80% of rainforests could adversely impacted by logging, deforestation, climate change by 2100

(08/05/2010) The world’s tropical forests may suffer large-scale degradation and deforestation by the end of the century if current logging and climate change trends persist, finds a new analysis published in Conservation Letters.