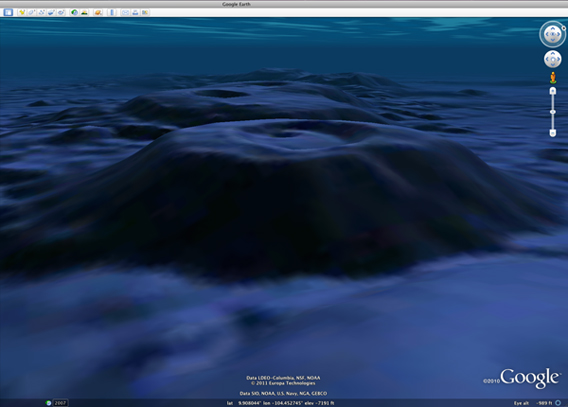 The Lamont Seamounts are an example of the view from the seafloor synthesized by a team of oceanographers at Lamont-Doherty Earth Observatory. The seamounts are due west of El Salvador, at about 9.55 degrees N, 104 degrees W.

How do you celebrate World Oceans Day? Well, if you’re Google you make the oceans of the world’s most impressive interactive digital globe, Google Earth, come alive. With oceanographers at Columbia University’s Lamont-Doherty Earth Observatory, Google Earth has fine-tuned its oceans’ resolution in selected areas from 1 kilometer to just 100 meters.

“In spite of the importance of the oceans for life on earth, the landscape beneath the sea is hidden in darkness and poorly mapped,” says oceanographer William Ryan from Lamont-Doherty in a press release. “While we can map the surface of planets from spacecraft in a single mission, to obtain comparable detail of the hidden seascape requires visiting every spot with a ship.”

Our general ignorance about the world’s oceans has led to the common, and accurate, quip that we know about the moon’s surface than we do our own oceans. Google Earth, however, is working to keep up with the latest data from oceanographers, including nearly 500 cruises covering 3 million miles over the last 20 years. Such expeditions are about much more than simple exploration; mapping the seafloor helps researchers better understand marine ecosystems, and provides better insights into earthquake and tsunami zones, perhaps in the future saving lives.

Around 5 percent of the oceans on Google Earth are now visible via ‘ground level view’, which is half the ocean area that has currently been mapped. Google Earth is also offering a number of tours to show the world’s computer geographers the ocean in all its peaks and valleys, including the 2011 Seafloor Tour and the Deep Sea Ridge 2000. 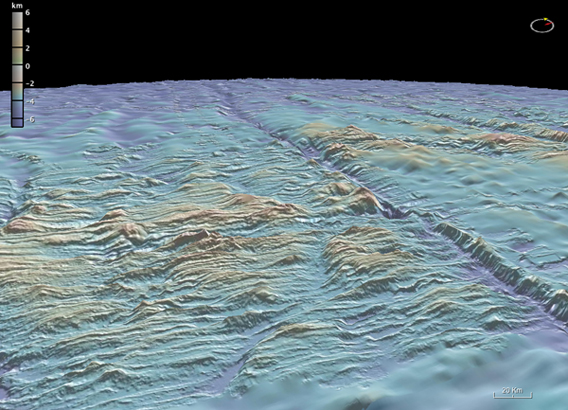 The Kane Fracture Zone cuts across the Mid-Atlantic Ridge. The floor of the fracture is over 5 kilometers deep and the mountain peaks are 1.5 kilometers below the surface. Photo: Lamont-Doherty/GMRT.

(05/24/2011) The Save the Redwoods League is partnering with Google Earth Outreach and iNaturalist.org to connect citizens and scientists in an effort to track the effects of climate change on redwood trees and forests.