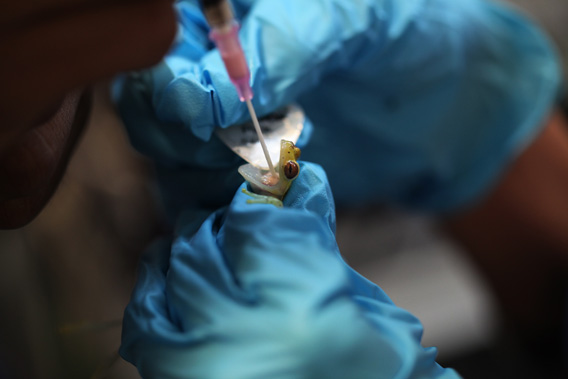 Hyloscirtus colymba tree frog being fed after being treated for Chytridiomycosis. Photo taken by Rhett A. Butler at Summit Park.

Frog populations worldwide are facing two apocalypses: habitat destruction and a lethal plague, known as chytridiomycosis. Over 30 percent of the world’s amphibians are currently threatened with extinction and it is thought at least 120 species have gone extinct in just the last 30 years. Unfortunately, a new study in Proceedings of the National Academy of Sciences (PNAS) finds that the two threats—habitat loss and chytridiomycosis—are likely to leave no frog population undisturbed. According to the study, frogs that live in still-pristine habitats are more susceptible to chytridiomycosis than those that are already suffering from habitat loss.

Examining tropical frog populations in Costa Rica, Australia, and Brazil’s Atlantic Forest, the researchers found “that paradoxically, habitat loss is negatively associated with occurrence, prevalence, and infection intensity of [chytridiomycosis] in amphibian populations in the tropics.” The finding goes against research of other animal diseases, which usually find that risk of disease increases in disturbed habitats.

In this case the researchers suspect that either the lethal disease depends on the ecosystem having an undisturbed microclimate, or that a decline in amphibian diversity and abundance—due to habitat loss—slows the spread of the disease.

The finding also explains why the presence of chytridiomycosis is often seen in higher altitudes where forest is less disturbed.

The researchers conclude that “disturbed habitats may act as shelters from disease, but only for the very few species that can tolerate deforestation” and recommend that in order to save the world’s remaining frogs, conservationists must “look to interactions between habitat loss and disease”.

Frogs and friends at risk from booming global wildlife trade

(09/08/2010) Alejandra Goyenechea, International Counsel at Defenders of Wildlife and Chair of the Species Survival Network’s (SSN) Amphibian Working Group, spoke with Laurel Neme on her ‘The WildLife’ radio show and podcast about the global amphibian trade. In her interview, Alejandra Goyenechea discusses the benefits of frogs and the many threats – such as habitat loss, climate change, pollution, invasive species, disease, and overexploitation – to their survival. Did you know frogs indicate environmental quality, like canaries in a coal mine? Or that many have medicinal properties, like the phantasmal poison dart frog which produces a painkiller 200 times the potency of morphine?