Are US floods, fires linked to climate change?

The short answer to the question of whether or not on-going floods in the US Midwest and fires in Texas are linked to a warming Earth is: maybe. The long answer, however, is that while it is difficult—some argue impossible—for scientists to link a single extreme weather event to climate change, climate models have long shown that extreme weather events will both intensify and become more frequent as the world continues to heat up. In other words, the probability of such extreme events increases along with global average temperature.

“There have always been extreme events,” Peter Stott, a climatologist from the UK’s Met Office, told Yale360
in a piece on extreme weather and climate change. “Natural variability does play a role, but now so does climate change. It is about changing the odds of the event happening.” 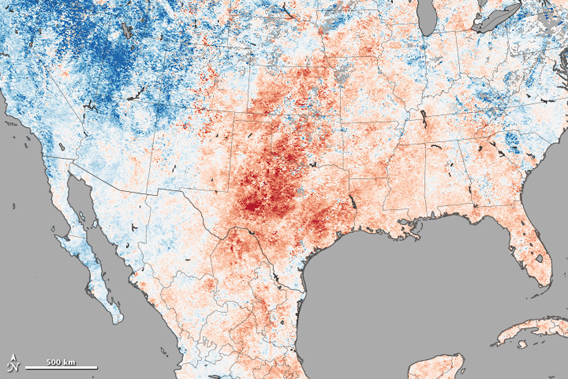 Image shows high temperatures as compared to average in the US. The redder means warmer than usual, while bluer means cooler. Image courtesy of NASA.

Drought conditions along with unseasonably warm temperatures and high winds in Texas has led to a number of massive fires, burning up over 2,300 square miles and killing three people, including two volunteer firefighters. In all, 886 fires have been recorded in Texas this spring.

“By now, most people get that you can’t attribute any single weather event on global warming,” John Nielsen-Gammon, Texas’ state climatologist and a professor at Texas A&M University, told the McClatchy-Tribune news service. “But some things are clear: temperatures have been going up, and models all agree that the temperature rise will continue unless we get some massive volcanic eruptions or the sun suddenly becomes much dimmer.” 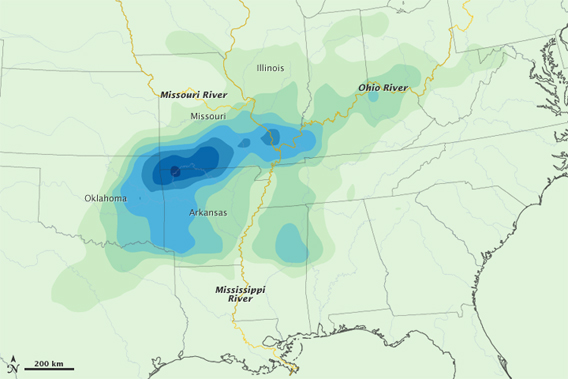 Image shows amount of rain that fell in the Midwest from April 19th-25th. Image courtesy of NASA.

According to renowned meteorologist Jeff Master’s blog flooding of the Mississippi River and the Ohio River in the Midwest is being ‘enhanced’ by near-record sea surface temperatures in the Gulf of Mexico, which is pushing warm, humid air into the Midwest. Sea surface temperatures in the Gulf are nearly 1 degree Celsius above average. Temperatures have only hit such highs in April twice in over a hundred years, both times in the past two decades: 2002 and 1991.

The question than becomes how much is climate change responsible for the near-record temperatures in the Gulf? Or is it instead natural variability. Climatologist Kevin Trenberth of the National Center for Atmospheric Research has an answer.

“It’s not the right question to ask if this storm or that storm is due to global warming, or is it natural variability. Nowadays, there’s always an element of both,” Trenberth told the New York Times last year in a front-page story on the connections between extreme weather and climate change. According to Trenberth, warmer global temperatures have put around 4% additional water vapor into weather systems over the past 30 years, producing heavier precipitation dumps.

Despite reluctance to link one event to warming, experts are moving forward on the science behind how climate change impacts extreme weather events. However, instead of directly attributing such extreme events to climate change, researchers are capable of showing how climate change raises the event’s probability.

Researchers have recently published landmark studies that found climate change made the deadly 2003 heatwave in Europe twice as likely to occur, and increased the likelihood of a 2000 flood in the UK by two to three times. The opposite has also been found. A recent study from the National Oceanic and Atmospheric Administration (NOAA) concluded that the crippling drought and fires in Russia last year were not linked to climate change. However, that study has since been criticized by Trenberth in Yale360 for not taking into account unusually high sea surface temperatures in the Indian Ocean.

Climate science by its very nature is complex and sometimes messy; extreme weather events can even be more perplexing. Such events are by definition very out of the ordinary. Although people may desire a 100% causation behind them uncommon events hardly ever prescribe to a simple ‘smoking gun’. For example, extinction is an extreme biological event, yet, like extreme weather, species extinction often has more causes behind it than one. A species may be pressured by some combination of hunting and habitat loss before an invasive species arrives and finally pushes it over the edge. Some facts, though, are clear: climatologists agree that anthropogenic climate change is making extreme weather events happen more frequently (and with more intensity), just as human impacts—such as deforestation, poaching, pollution—is making the extinction of species occur at rate around 100 to 1000 times the average.

Uncommon weather is becoming more common. Last year alone the world—from Russia to Pakistan to the US to Australia to the Amazon—was rocked by record-setting droughts and floods, destroying crops, creating refugees, and taking lives.

“The climate is changing. Extreme events are occurring with greater frequency, and in many cases with greater intensity,” Jay Lawrimore, chief of climate analysis at the National Climatic Data Center told the New York Times.

With nations refusing to seriously tackle greenhouse gas emissions, predictions of future warming have become dire. In terms of extreme weather this likely means even more and even worse. As Joe Romm of the blog Climate Progress writes, “in short, we ain’t seen nothing yet.”

(04/17/2011) NASA has revealed a satellite image of the crippling effect of last year’s record-breaking drought on the Amazon ecosystem. For those of you counting, that’s two record droughts in the Amazon Basin in 5 years.

(11/29/2010) By the time children born this year reach 50 years old, the Earth could be 4 degrees Celsius warmer (7.2 degrees Fahrenheit) warns a new study as governments meet in Cancun for this year’s UN climate summit, which is not expected to produce an agreement. Last year governments pledged in the non-binding Copenhagen Accord to keep temperatures below a 2 degree Celsius rise, but a new study in Philosophical Transactions of the Royal Society A argues that even with current promises to cut emissions this is unlikely and, in a worst-case scenario, a rise of 4 degrees Celsius is possible by 2060.

(08/11/2010) A new series of images released by NASA show the extent of smoke hovering over Moscow and Central European Russia, while another image measures the amount of carbon monoxide in the area, a gas which can produce a number of health problems. Russia is in the midst of a full-scale disaster as hundreds of forest and peatland fires are covering part of the world’s largest nation in a thick cloud of smoke. Temperatures in Moscow and elsewhere have broken past heat records several times in the last month while a long drought combined with fires have led to the loss of 20 percent of Russia’s grain crop, causing Prime Minister Vladimir Putin to ban grain exports. Russian officials say that it;s likely some 15,000 people to date have died from the disaster.

(07/27/2010) Moscow and parts of Russia have been hit by record high temperatures and forest fires. Ashen fog from peat forests burning near Moscow has prompted officials to warn elderly and those with heart or bronchial problems to stay inside. Workers should be allowed a siesta to rest in the afternoon, as well, said the Russia’s chief health official.

Freak floods in US predicted by 2009 climate change report

(06/16/2010) A rash of flash floods has struck the US during this spring: Rhode Island, Tennessee, Arkansas, and most recently Oklahoma have all faced devastating floods that have resulted in the loss of property and in some cases tragic deaths. While flash floods have occurred throughout US history, the number of big floods this year appears abnormal at best, but not unexpected by researchers. Climatologists warned last year that an increase in floods and severe storms is very probable as the world warms.