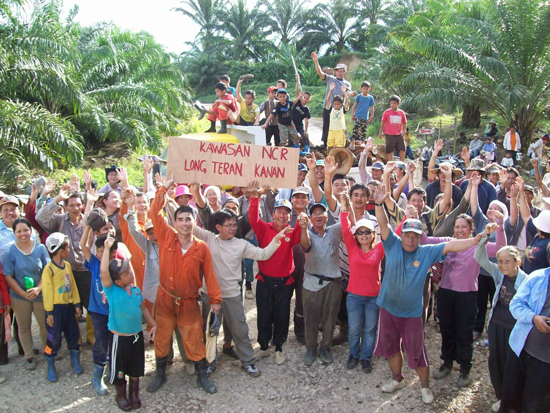 People of Long Teran Kenan blockading the road to their lands in Sarawak. Image courtesy of RAN.

A community in Malaysian Borneo seized an oil palm plantation belonging to the IOI Group after the palm oil giant failed to respect the terms of a court ruling that the plantation was established on native customary land, reports the Rainforest Action Network (RAN).

According to the San Francisco-based activist group, the action came after months of inaction by IOI, following the March 2010 court decision that two concessions held by the palm oil company were planted on community lands. Despite the ruling, IOI continued to operate its plantations. It also broke its commitment not to appeal the court decision, according to RAN. So earlier this month, the people of Long Teran Kenan blocked the road and occupied the plantation. They have since started harvesting and selling the fruit to a nearby palm oil mill.

RAN is highlighting the situation because IOI supplies palm oil to Cargill, America’s largest palm oil importer. RAN says Cargill has failed to enact policies that protect against such abuses.

“Cargill is the number one importer of palm oil into the US,” writes Lindsey Allen, RAN’s Forest Program Director, on the green group’s Understory Blog. “This gives Cargill enormous influence over global palm oil markets, including how palm oil is produced, refined and distributed.”

“For more than three years, RAN has pushed Cargill to adopt basic safeguards that would ensure the company is not importing human rights violations, rainforest destruction, and climate change. Because Cargill has to date failed to institute these safeguards, controversial palm oil is still found throughout American supermarkets.”

,
Cargill did not respond to request for comment from mongabay.com, but in an emailed statement, IOI disputed the charges.

IOI said the High Court of Sarawak did not grant “the natives” the right to reclaim the contested land and added that the natives’ customary rights on the land “can be extinguished by paying compensation.” IOI further stated that the court “did not grant any injunctions sought by the natives restraining IOI Pelita from remaining and continuing its operations on the lands.” Therefore IOI believes the actions by the people of Long Teran Kenan are “illegal.”

But RAN’s Allen was not satisfied with IOI’s response.

“IOI Corporation’s interpretation that ancestral rights can be ‘extinguished’ through monetary compensation is not only offensive, but is indicative of IOI’s lack of commitment to respectful engagement with people of Long Teran Kenan,” she told mongabay.com.

“Rainforest Action Network disputes IOI’s accusation that the native customary landholders are ‘illegal’ and will continue to stand in solidarity with the community of Long Teran in its fight to reclaim ancestral lands from one of the most powerful palm oil companies if the world. I repeat the question raised to IOI that went unanswered in its response to RAN: Will IOI Group negotiate in good faith or will it continue to pursue disingenuous legal interpretations to contest the legitimacy of the Indigenous community?” 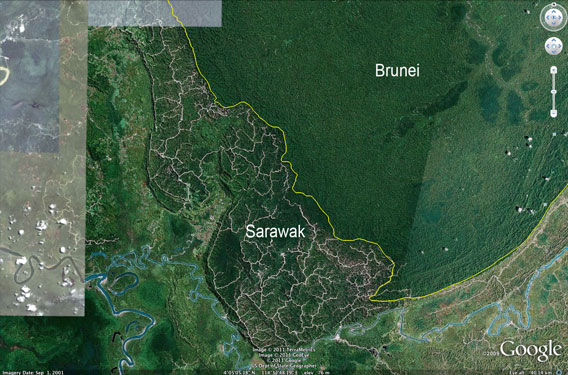 Sarawak’s forests have been heavily impacted by logging and plantation development over the past three decades. Last year the government announced a plan to expand its oil palm estate by more than a million hectares (2.5 million acres) over the next decade. James Masing, Sarawak’s Land Development Minister, said native customary lands would be targeted for plantation development.

Forestry companies in Sarawak are known to enjoy close ties to the government, including Chief Minister Pehin Sri Abdul Taib Mahmud, who has been linked to overseas properties worth hundreds of millions of dollars. The origins of these holdings remain unexplained.