The Cambodian Prime Minister, Hun Sen, has approved a 9,000 hectare (22,200 acre) rubber plantation in Virachey National Park despite its status as a protected area, reports the Phnom Penh Post. The park is also listed as an ASEAN Heritage Park.

The concession to clearcut the forest and establish a rubber plantation was awarded to Srun Sovannaphoum Investment Co Ltd.

“It is good because that area is uninhabited, so when the company comes to invest they will also construct a road,” Ratanakkiri provincial governor Pav Hamphan told the Phnom Penh Post. Villagers in another region of Cambodia are protesting the loss of their forest, known as Prey Lang, to rubber plantations.

“Cutting some part of Virachey National Park may not affect villagers, but it seriously affects the forest and this province will lose even more forest land,” Pen Bonnar, coordinator for local rights group Adhoc, told the Phnom Penh Post

The World Bank has invested $5 million into managing Virachey National Park, which has suffered from illegal logging.

The rubber plantation concession is not the first time Cambodia has handed parts of the park over to private industry. In 2007 the government granted Australian gold-mining company, Indochine Mining, rights to exploratory mining in half the park.

The wildlife of Virachey National Park have been little studied, but a Rapid Assessment Survey (RAP) in 2007 found evidence of healthy populations of dholes—listed as Endangered by the IUCN Red List—inhabiting the park, in addition to gaurs, yellow-cheeked gibbons, stump-tailed macaques, Asiatic black bears, Malayan sun bears, and Asian small-clawed otters. The short survey also found a number of species that may be unknown to science. 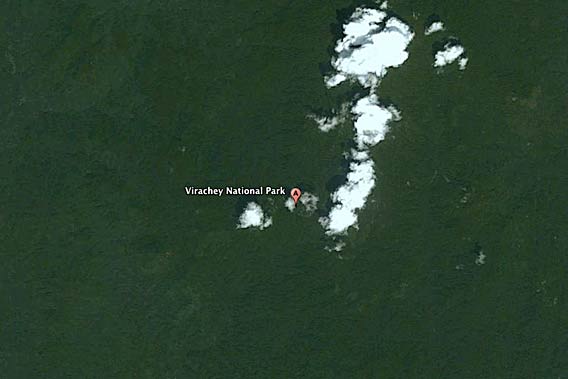 A portion of Virachey National Park as seen by Google Earth.

Cambodia approves titanium mine in world’s ‘most threatened forest’

(02/15/2011) The Cambodian government has approved a mine that environmentalists and locals fear will harm wildlife, pollute rivers, and put an end to a burgeoning ecotourism in one of the last pristine areas of what Conservation International (CI) recently dubbed ‘the world’s most threatened forest’. Prime Minister, Hun Sen, approved the mine concession to the United Khmer Group, granting them 20,400 hectares for strip mining in Cambodia’s Cardamom Mountains. The biodiverse, relatively intact forests of the Cardamom Mountains are a part of the Indo-Burma forest hotspot of Southeast Asia, which CI put at the top of their list of the world’s most threatened forests. With only 5% of habitat remaining, the forest was found to be more imperiled than the Amazon, the Congo, and even the forests of Indonesia and Malaysia.

One man’s mission to save Cambodia’s elephants

(05/17/2010) Since winning the prestigious 2010 Goldman Environmental Prize in Asia, Tuy Sereivathana has visited the US and Britain, even shaking hands with US President Barack Obama, yet in his home country of Cambodia he remains simply ‘Uncle Elephant’. A lifelong advocate for elephants in the Southeast Asian country, Sereivathana’s work has allowed villagers and elephants to live side-by-side. Working with Fauna and Flora International (FFI) he has successfully brought elephant-killing in Cambodia to an end. As if this were not enough, Sereivathana has helped curb the destruction of forests in his native country and built four schools for children who didn’t previously have formal education opportunities.