The last lions of Asia and the final survivors of the Asiatic lion subspecies (Panthera leo persica) are losing their federal conservation funding to tiger programs, reports the Indian media agency Daily News & Analysis (DNA). While the Asiatic lion once roamed Central Asia, the Middle East, and even Eastern Europe, today the subspecies survives only in India’s Gir Forest National Park in the north-western state of Gujarat.

“We are unable to understand why the central government is being so tightfisted with lions when the tigers are being allocated huge amounts regularly. Though the state government has enough allocated funds for now under the Lion Conservation Society of India, several mega projects are on hold,” a senior forest official explained to DNA.

The lion population has been increasing and today numbers 411 individuals, whereas India’s tiger population continues to plunge due to poaching and habitat loss. Last year, the Chinese year of the tiger, brought global media attention to the plight of tiger’s worldwide, while the world’s last population of Asiatic lions remains largely unknown.

However, that may be changing. Last year saw visitors to Gir Forest National Park increase by 55% after the state of Gujarat effectively promoted tourism.

Still, India appears—perhaps due to international pressure to save its tigers—to have selected tiger programs over lion conservation.

“The lions are safe in Gujarat and multiplying. We were impressed by the way Gujarat dealt with the poaching problem. The forest dwellers in Gir are tolerant towards the big cat, while the tiger is being killed in other states. That is a burning problem,” a source told DNA.

Even though lion poaching and poisoning has lessened, as top predators Asiatic lions are quite capable of causing considerable distress to adjacent villages. A report by NTD television states that local villagers are in ‘constant fear’ of the lions, which frequently kill local livestock.

Given its tiny population and the fact that it survives in a single location, the Asiatic lion continues to be threatened by in-breeding, disease, fires, and illegal mining. As well, conflict with villagers continues, and lions have been poached and poisoned in the past. The subspecies is listed as Endangered by the IUCN Red List. 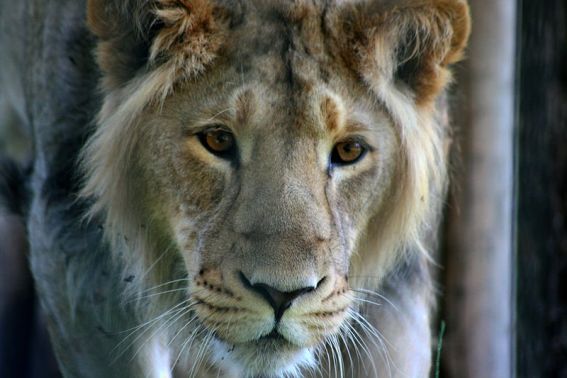 NTD’s report on livestock kills by the Gir Forest’s lions.

20 convicted for poaching Asiatic lions in their last refuge

(11/06/2008) Twenty people have been convicted for poaching Asiatic lions last year in India’s Gir National Park. The twenty individuals will spend three years in prison and be fined 10,000 Rs each.

(07/21/2010) On July 20th two unidentified men rode up to Amit Jethwa on a motorcycyle as he was coming out of his office in Ahmedabad and shot him dead at point blank range. Jethwa had recently filed a petition against illegal logging in the Gir Forest, the last home of the Asiatic lion, a subspecies of the African lion listed as Endangered by the IUCN Red List.