Brazil’s cerrado wins protection, but will it be enough to save the wildlife-rich grassland?

Brazil announced a plan to protect the cerrado, the vast woody savanna that covers 20 percent of the country but has become the nation’s biggest single source of carbon emissions due to conversion for agriculture and cattle pasture, reports Brazil’s Ministry of the Environment.

Unveiled today in Brasilia, the $200 million initiative establishes the “political framework for the conservation and sustainable use of the most threatened biome in Brazil,” according to a statement released by the ministry.

The Action Plan to Prevent and Control Deforestation and Wildfires in the Cerrado Biome (PPCerrado) comes under Brazil’s ambitious program to reduce its carbon dioxide emissions 40 percent from a projected 2020 baseline. The plan initially focused on reducing emissions from Amazon deforestation, neglecting emissions from the cerrado, which last year surpassed those from rainforest clearing. 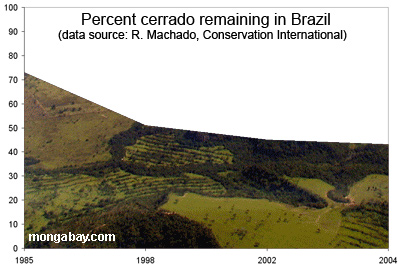 Biofuels driving destruction of Brazilian cerrado
The cerrado, wooded grassland in Brazil that once covered an area half the size of Europe, is fast being transformed into croplands to meet rising demand for soybeans, sugarcane, and cattle. The cerrado is now disappearing more than twice as the rate as the neighboring Amazon rainforest, according to Ricardo Machado, a Brazilian expert on the savanna ecosystem.

The rise in cerrado conversion, which is now disappearing more than twice as fast as the neighboring Amazon rainforest, is partially a result of efforts to stem rainforest loss. Seeking to avoid land use restrictions and penalties in the Amazon, farmers and ranchers turned to the cerrado to expand soy, sugar cane, and cattle operations. Nearly half the cerrado’s 2 million square kilometers has now been cleared of its original vegetation and converted for agriculture or pasture. Destruction of the biome has long been overlooked by environmentalists and the government, but accelerating loss and the realization that conversion of cerrado is now a major source of greenhouse gas emissions has led conservationists in recent years to call for protective measures.

“This plan is an evolution of the plan to fight deforestation in the Amazon,” Paulo Adario, Amazon Campaign Director for Greenpeace Brazil, told mongabay.com, adding that too few environmental groups are campaigning to protect the cerrado.

“[There is] little pressure to force the government and producers to move in the right direction.”

Roberto Smeraldi, founder and director of the environmental group Amigos da Terra – Amazônia Brasileira, says that while the government’s intent to protect the cerrado is welcome, it remains to be seen whether it is willing to take the tough measures needed to reign in agricultural expansion.

“It is positive there is now a formal concern for cerrado,” Smeraldi told mongabay.com via email. “The challenge for the plan is… to cancel and/or revert the existing perverse incentives towards leaking land use change from the Amazon to cerrado.”

Smeraldi said the government would need to step up law enforcement in cerrado areas if it hopes to have an impact.

“The enforcement packages should be supported by increase in the collection of fines, which is now around 0.5 percent,” he explained. “At this rate, it is almost a guarantee of impunity.”

The cerrado has been disappearing at a rate of more than 20,000 hectares per year since 2002. The ecosystem is known to house 10,400 species of plants, nearly half of which are endemic; 935 bird species; 780 freshwater fish species; 113 amphibian species; 180 reptile species; and almost 300 mammal species.